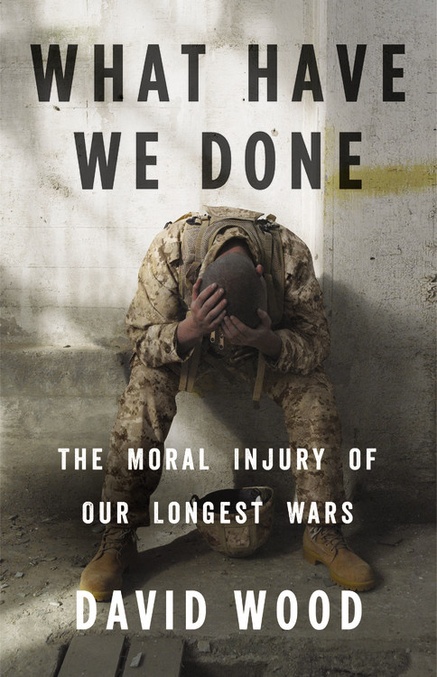 Many American soldiers returning home from combat in Iraq and Afghanistan suffer from nightmares and physical symptoms grouped under the label Post Traumatic Stress Disorder.

That label, though, does not include the moral injury and guilt that afflicts soldiers devastated by memories of killing civilians and children, and watching comrades die in battle. In What Have We Done, David Wood argues that government has largely ignored this stark reality.

“The U.S. military has spent years and fortunes perfecting the most realistic and thorough combat training in the world. But in preparing young Americans for war, it has failed in one glaring aspect. Those we send to war are never trained to anticipate the moral quandaries of killing that they will face; they are given no opportunity or encouragement to think about or to discuss what makes some killings moral and others a sin or even illegal.”

Wood grew up as a Quaker and pacifist. As a reporter for the Huffington Post, he embedded himself with U.S. troops in Iraq and Afghanistan. He came away with a deeper understanding of the moral quandary of war.

The author includes disturbing scenes, such as the time an Army captain deliberately shot an insurgent in the stomach instead of the chest, knowing this would cause a lingering and painful death.

In another case, a boy approached an outpost and said he wanted to show the Marines something. He led them to a man’s body ravaged by dogs. The Marines had fatally shot the man one night because he was acting suspiciously. It turned out that the man was the boy’s father, a deaf and mute farmer who was merely planting seeds and did not hear the warning shots.

Many soldiers return home suffering from depression and guilt. Some commit suicide, others engage in domestic violence, and many become addicted to drugs or alcohol.

Over the centuries nations have tried to make war less brutal and more humane. Treaties have banned chemical and biological weapons and mandated steps to protect civilians. But the Vietnam War and current warfare in the Middle East demonstrate the difficulty of limiting illegal and immoral actions.

More than 5,000 Americans have been killed in Iraq and Afghanistan. Soldiers have lost limbs, eyes and private parts. One survey found that two-thirds of Marines serving in Iraq had witnessed the death or wounding of a comrade.

Men return home traumatized by what they have seen and done. One soldier home from Afghanistan was haunted by the image of his firing rockets into a building hiding Taliban gunmen, as well as women and children. He is convinced that one of the rockets he fired went through the head of a child.

Almost 30 percent of enlisted Marines sent to Iraq and Afghanistan were age 20 or younger. Wood notes that the brains of teenagers are not fully developed until they reach their mid-20s.

There has been no effective U.S. anti-war movement and “precious little questioning of the moral justifications of the wars” in Iraq and Afghanistan.

Although Wood concedes that war sometimes is necessary, he also says that “good rarely comes from war. The human misery and wreckage are hard to overstate.” Still, we learn little about how his first-hand exposure to combat affected his views as a pacifist and conscientious objector.

The book is a bit disorganized and at times suffers from an academic tone. The text jumps around and loses its focus. Wood includes lots of history, profiles and quotes, but the parts do not add up to a coherent or persuasive whole.

Perhaps the bottom line is, as the saying goes, “War is hell.”

Film: Playwright August Wilson began his chronicle of the African-American experience throughout the … END_OF_DOCUMENT_TOKEN_TO_BE_REPLACED

Film: Just in time with the opening of movie theaters in Palm Beach County comes the season’s most … END_OF_DOCUMENT_TOKEN_TO_BE_REPLACED

Music: The very last concert Franz Joseph Haydn attended in his life was in March 1808, about a year … END_OF_DOCUMENT_TOKEN_TO_BE_REPLACED