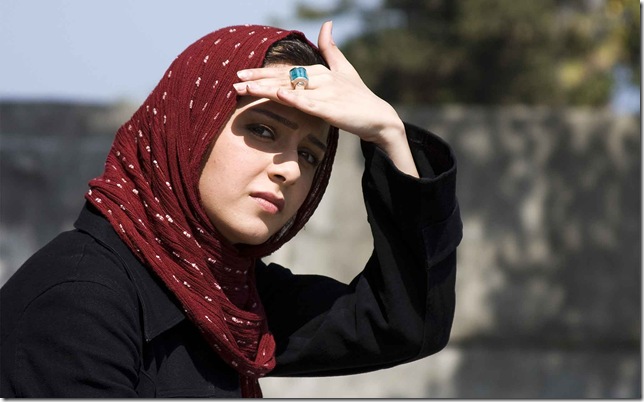 To follow along with this knotty and riveting study of humans in crisis is to rewire old paradigms when unknowns become known, to accept that some unknowns will remain so until the credits roll and, generally, to question even the known knowns.

It requires a viewer’s constant and astute attention, and it earns that engagement.

The narrative of About Elly pivots entirely on a surprise twist, 30 minutes into the movie, on the shore of the Caspian Sea, where three middle-class Iranian couples, their children, and two eligible singles gather for a weekend vacation. At the beginning, it takes some mental strain just to understand who’s who in this bustling dynamic. They’re a boisterous clan of longtime friends with a clearly defined pack leader: Sepideh (Golshifteh Farahani), who handles the keys (both literal and metaphoric), makes the arrangements and, increasingly, contrives the most convenient lies to alleviate situations of mounting panic.

The first of these fibs leads the group to its particular seaside villa, a dilapidated, un-air-conditioned pile. By democratic vote, they decide to stay in the crumbling resort, cleaning it up and making the best of a rotten situation — that is, until a boom sounds on the beach, a daughter scrambles from the shore to inform her parents of terrible news, and the movie’s genre and tone changes drastically.

Without revealing the nature of the twist, suffice it to say that comparisons to L’avventura are unavoidable. But unlike Michelangelo Antonioni, Farhadi is not interested in chronicling the callousness of the idle and the entitled. The central enigma of About Elly is never discarded; it is exhaustibly considered from every possible angle, shuffled and reshuffled like a Rubik’s Cube of possibilities, few of them landing on colors that line up.

Blame is assigned and reassigned. Characters once united become divided. Old cultural norms of patriarchy and misogyny creep out of the movie’s woodwork, disrupting the progressivism of these modern couples. Everything unravels, with the soundtrack’s pitiless crash of waves and the dingy villa’s cracks and stains finding aural and visual correlatives for the characters’ plight.

About Elly is such a brilliant and assured work of art-house nirvana that it’s hard to imagine that it’s been sitting on a shelf, awaiting American distribution, for six years. It’s apparently taken the success of Farhadi’s subsequent films — The Past and the Oscar-winning A Separation — to finally secure a deal for this earlier, and arguably richer, work. If you’ve seen those films, you know that Farhadi excels at not giving us all of the information, at forcing us to navigate the same uncertain tides as his characters. His narrative obliqueness, his profound understanding of domestic dynamics, his moral inquiry into the human condition — all of these elements from his recent work appear in full flower in About Elly.

The film is a layer cake of symbolism, where expediency and responsibility vie for ethical dominance, and where seemingly incidental lies provide crucial clues to its mystery. By now, we’re used to films that explain everything to us — that revisit the details we may have missed, usually in a tacky montage, just prior to the third-act reveal. Not so with About Elly; this is a film that expects you to remember key details and then rewards that memory.

The past is in the past, and Farhadi places us always in the present, adrift among the tumult of these conspiring couples. The fact that there is, finally, some closure to About Elly is the movie’s only, minor disappointment; until then, we revel in being rudderless against a vast ocean of possibility.

Film: Playwright August Wilson began his chronicle of the African-American experience throughout the … END_OF_DOCUMENT_TOKEN_TO_BE_REPLACED

Film: Just in time with the opening of movie theaters in Palm Beach County comes the season’s most … END_OF_DOCUMENT_TOKEN_TO_BE_REPLACED

Music: The very last concert Franz Joseph Haydn attended in his life was in March 1808, about a year … END_OF_DOCUMENT_TOKEN_TO_BE_REPLACED