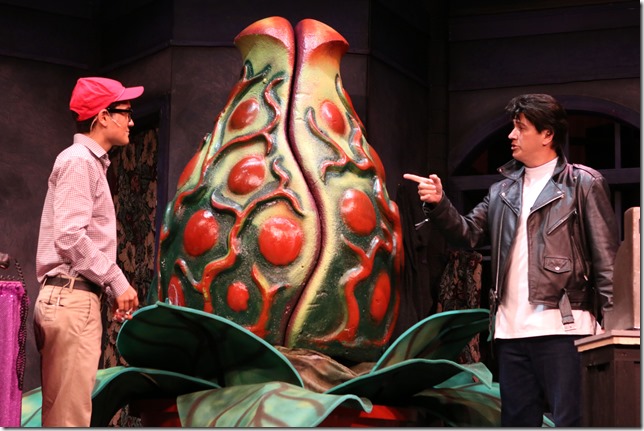 Audrey II (center) is flanked by Sergio Cannata (left) and Jim Tyminski in Little Shop of Horrors at the Delray Beach Playhouse.

The comedy rock musical Little Shop of Horrors has a way of growing on you, especially the production now being staged at the Delray Beach Playhouse.

Veteran director and artistic boss at DBP, Randolph DelLago, has drafted a talented cast with voices particularly tuned to delivering the 1960s-style rock score. They also have the acting chops to play their parts slightly off center, in keeping with the fanciful and fantasy roles crafted by playwright/composers Alan Menken and Howard Ashman.

Little Shop, the 1982 Off-Broadway musical about a downtrodden Skid Row florist shop worker whose “strange and unusual” flytrap-type plant boosts business incredibly, but lives on human flesh and blood in return, is one of the best performed by the Delray Playhouse gang. The players are excellent, as are the sets and lighting. Of course, the music is live — a plus for any show. A quartet in the pit — Toni Stamos, Arthur Barnes, David Kroll and Steve Jernigan — provides wonderful accompaniment for the players.

The Menken-Ashman writing team (which also scored The Little Mermaid and Beauty and the Beast for Disney) built Little Shop around a very weird central character that spins off laughs as well as vines. The score includes some toe-tapping songs such as “Skid Row (Downtown)” and “Git It” as well as lovely ballads such as “Suddenly, Seymour” and “Somewhere that’s Green.”

After a day without customers, Mushnik decides to close for good. Audrey saves the day by telling Seymour to bring in the strange plant he bought from a Chinese flower seller. The greenery — which Seymour named Audrey II — brings prosperity to the store and lots of fame for the plant kid.

A dark secret remains untold. The plant lives on flesh and blood — and its appetite is growing. “Feed me,” it sings, with a voice filled with impatience and aggression. Suddenly, people begin to disappear, even as Seymour gains notoriety. Audrey sings, “Suddenly Seymour” which seems to solidify their love. But the plant wants to end this association, and it sings “Suppertime,” anticipating her imminent demise.

The finale is — well, it’s up to the audience to fathom. Just remember something that Leonard Nimoy once said: “No one dies in science fiction.”

The only regret about this show is that it will have only run for three weeks when it closes Sunday. A lot of work has gone into it.

Cannata is excellently geeky, a tad clumsy, but highly moral in his role as Seymour Krelborn. His angst with doing “ugly, nasty things” drives him to distraction. 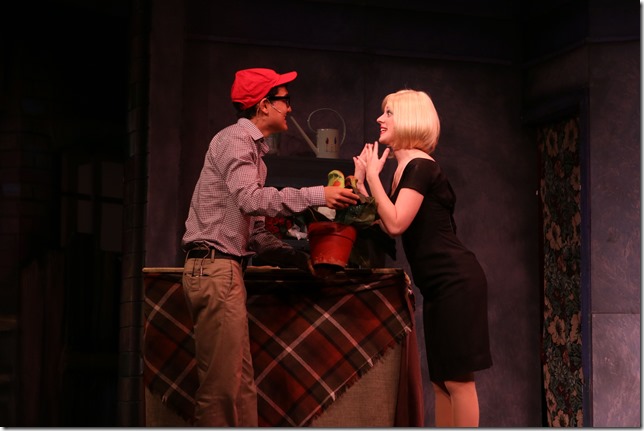 Sergio Cannata and Sarah Rose in Little Shop of Horrors at the Delray Beach Playhouse.

Sarah Rose has developed her character of Audrey to a T, with understated humor and cleverness hidden by a low self-esteem. Her voice is clear and strong, particularly in “Suddenly, Seymour” and “Somewhere that’s Green.”

As Mushnik, Feldman is necessarily cranky and suspicious, like someone long exposed to the rigors of Skid Row. And the girls in the Greek chorus who seem to pop up as needed — Katie Fredrickson, Lara Williams and Mika Moore — are terrific, each sporting a 60s-style name — Chiffon, Crystal and Ronette. They introduce the musical, performing the whimsical title song; and join Mushnik on “Don’t It Go to Show Ya Never Know” and accompany Orin with “Dentist.”

Tyminski is the utility guy in this production. Portraying Orin, he doesn’t come off as a Steve Martin wannabe, but is tough enough to nab the part, particularly with the song “Dentist.” He also plays every other part, including that of Clare Boothe Luce, who visits Seymour to get him on the cover of Life magazine.

James Beecham stands out as a Skid Row derelict.

Delray Playhouse has done a truly excellent job staging this production. The backstage staff is expanded to include a running crew to help animate the plant and move props around. The Skid Row shop is particularly intriguing and well-designed, with a drop-down wall that allows the show to continue while changes are made unseen at the flower shop.

DBP also gives special attention to the plant in all of its incarnations. It grows from a small pot-size flower to a monstrous bit of vegetation that fills the flower shop. It’s a realistic prop that obviously requires a lot of effort to manipulate. Kaylee Cooper handles the workings of Audrey II from the inside while Christopher Lista supplies the plant with a deep, clear voice filled with pith, gusto and power.

Film: Playwright August Wilson began his chronicle of the African-American experience throughout the … END_OF_DOCUMENT_TOKEN_TO_BE_REPLACED

Film: Just in time with the opening of movie theaters in Palm Beach County comes the season’s most … END_OF_DOCUMENT_TOKEN_TO_BE_REPLACED

Music: The very last concert Franz Joseph Haydn attended in his life was in March 1808, about a year … END_OF_DOCUMENT_TOKEN_TO_BE_REPLACED