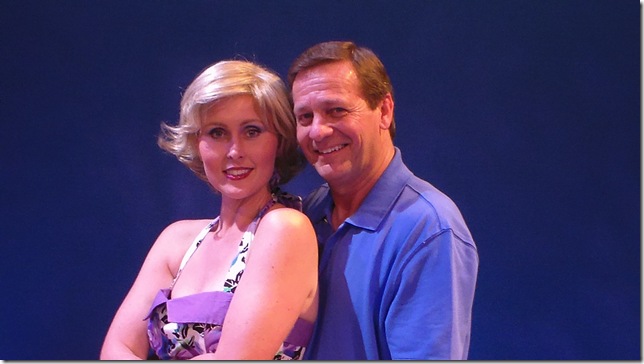 The Pajama Game may not be the newest or flashiest musical to hit Broadway. But the tune-filled 1954 show has long theatrical legs, some truly comic moments, a story with timeless appeal and a score that engendered some standards.

The show, now being staged at the Delray Beach Playhouse, deals with labor troubles at the Sleep-Tite Pajama Factory, where worker demands for a seven-and-a-half cent an hour pay raise are going unheeded. Despite the troubled atmosphere, love blossoms between Babe (Jeannette Thompson), the grievance committee head, and Sid Sorokin (Delray Playhouse regular Michael DeGrotta), the new factory supervisor.

The score by Richard Adler and Jerry Ross (who also wrote the music for Damn Yankees) features three tunes that crossed over to the Hit Parade: Steam Heat, Hernando’s Hideaway and Hey, There, a chart topper for Rosemary Clooney. The show was made into a film starring Doris Day as Babe. It has also been revived on the stage twice, in 1973 and in 2006, when crooner Harry Connick Jr. sang and danced the Sid Sorokin role.

The Delray production gets a major boost with music from a live trio that capably follows the action — much better than a prerecorded track. The hard-working musicians for this show are Toni Stamos, keyboard and musical director; Branden Stair on bass and David Kroll on percussion.

Early on, the audience perceives the Sleep-Tite factory as a busy place, with workers singing a rapid rendition of Racing with the Clock. Naturally, they are irked when the big boss, Mr. Hasler (Scott Travis), says he won’t budge on the proposed pay hike. He just puts up his fists and says, “I’m a fighter.”

But it appears he’s the only honcho looking at fisticuffs. The new supervisor, Sid, is just plain lonely, and literally sings the blues — A New Town Is a Blue Town. But when he lays eyes on Babe, he crosses the labor-management line. At first, she rejects him (I’m Not At All in Love) and he forlornly sings the sad tune, Hey, There into his Dictaphone. (One of the desks also has a typewriter. Fancy that!)

But the annual company picnic turns the tables for Sid and Babe, and their romance warms. There Once Was a Man, perhaps the most energetic tune in the show, complete with some fancy choreography, allows both to proclaim their love for each other.

The romance, though, is interrupted when pajama plant employees stage a work slow-down. Sid demands “an honest day’s work” and threatens to fire slackers. Babe causes a mechanical breakdown in the plant and Sid reluctantly fires her. As she leaves, he begins to wonder whether a romance with her will survive.

The conclusion is a tad formulaic. Union leader Prez (Steve Frank), Babe and the factory girls sing 7 ½ Cents, which pretty much wraps up the labor situation. And Sid and Babe join for a reprise of There Once Was a Man. Go figure.

Delray Playhouse cast members grab their roles with spunk and gusto. As Babe, Thompson has a wonderful voice and great stage presence. Krystyna Barron, in the role of the boss’s unyielding secretary, Gladys, rings in with some nifty vocals and a splendid song-and-dance version of Steam Heat with help from the box boys.

The show also features Norman Steinthal as Hines, the efficiency expert who sounds like he just arrived from a vaudeville show. He crisscrosses the stage throughout, making sure everyone is doing his or her job. He has a whiney, nasally voice that’s amazingly distinctive and just plain funny. He performs the funniest song in the show, Think of the Time I Save, along with the factory girls.

Mabel (Abby Bernstein) makes her voice known around Sleep-Tite as her role expands during the show. She and Hines offer up I’ll Never Be Jealous Again. And another Delray regular, Marc Streeter, has a small, but lovable part as Pop, Babe’s father.

Proving again that he can sing, act and do pretty much anything required on a stage, DeGrotta adds another achievement to his theatrical resume. He’s as familiar a face at the Playhouse as that of Randolph DelLago, artistic chief and this show’s director.

Film: Playwright August Wilson began his chronicle of the African-American experience throughout the … END_OF_DOCUMENT_TOKEN_TO_BE_REPLACED

Film: Just in time with the opening of movie theaters in Palm Beach County comes the season’s most … END_OF_DOCUMENT_TOKEN_TO_BE_REPLACED

Music: The very last concert Franz Joseph Haydn attended in his life was in March 1808, about a year … END_OF_DOCUMENT_TOKEN_TO_BE_REPLACED