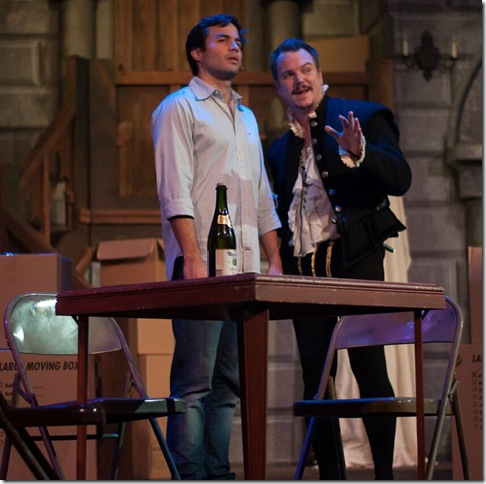 The latest production at the Lake Worth Playhouse, I Hate Hamlet, is a mixture of factoids and fantasy, a whimsical frolic that seems to encourage every performer to overact.

Be prepared to suspend your disbelief for this skewing of Shakespeare at the downtown Lake Worth venue.

IHH, which opened on Broadway in 1991, is an over-the-top tale of a successful but discontented TV actor, Andrew Rally (Alonso Yabar), who moves to New York after his program is canceled to play Hamlet on the local stage. He moves into an apartment once occupied by consummate actor John Barrymore. The ghost of the star thespian (Bryan Wohlust) appears, clad as Hamlet, to encourage Andrew, who has serious misgivings about performing as the Shakespearian icon.

Playwright Dan Rudnick brings some true-life experience to the play. In fact, the author lived in an apartment that Barrymore once called home. Unless he consumed the large quantities of alcohol that The Great Profile purportedly did, he probably didn’t observe any ghosts.

But he may have been surrounded by wacky characters such as those in this play: Felicia (Kari Budyk), the loopy real estate agent who talks to her late mother via séances; Lillian (Joanne DePrizio), Andrew’s agent, who lives for good times and claims she once had a fling with Barrymore in this very apartment; ditzy girlfriend Deirdre (Kirsten Kuzmirek), who has a special fondness for Hamlet, and Paul (Michael Conner), Andrew’s buddy from California who has mastered the look, the talk and the moves of the West Coast.

The play is set against a masterfully forbidding castle décor beautifully crafted by set designer Cindi Taylor (and brought to life by set builder Barry Brimacomb). In Act II, the set becomes even more palace-like with the addition of a throne and other medieval trappings.

An eerie mood pervades the play in Act I, as if everyone knows that Barrymore’s ghost is near. Felicia offers to conduct a séance to draw out the stage master. The hand-holding, candlelit session explodes, but Barrymore doesn’t arrive until he wants to. With a champagne bottle or some other container of intoxicant in hand, he over performs his part, even drawing attention to his stuffed codpiece which sets the audience to laughing.

The show takes a quantum leap on the laugh meter in Act II when Andrew takes an avid interest in the Hamlet role and also appears on stage clad as the worrisome Danish prince. This duality proves that two Hamlets are better than one, particularly if you want the audience to laugh out loud.

The funny stuff just flows as the two Hamlets sashay around the stage, duke it out with swords and give each other fist bumps and high fives as if they were a couple of fops.

Lots of fun people populate this play, including director Clayton Phillips, whose multitude of credits includes last season’s Cabaret and One Flew over the Cuckoo’s Nest. 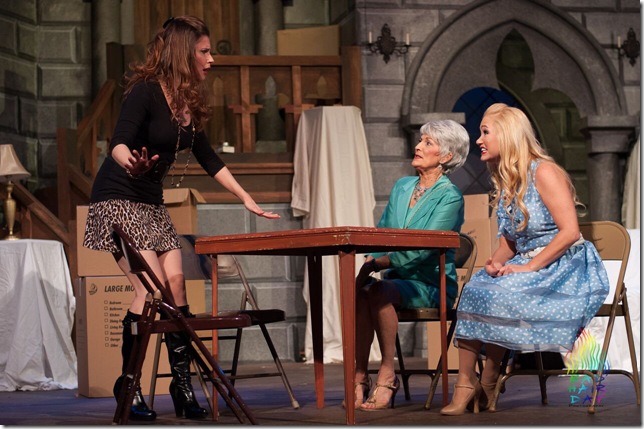 Yabar, a native of Peru, makes his LW Playhouse debut as Andrew. His I-don’t-care-much attitude show in Act I is just a guise for his comic turnabout in Act II. He matches Barrymore move for more, exaggeration for exaggeration until they practically flow as one.

Wohlust is exceptional as Barrymore. The actor has performed a number of outstanding roles at Lake Worth and has taken a little something from each to create his Barrymore. He was Oscar in last year’s The Odd Couple (which also starred Budyk), the crazed Aldolpho in The Drowsy Chaperone and Sir Galahad in Spamalot.

The aforementioned Budyk combines zany with sexy to create Felicia, who reacts to gleeful events with laugher and a squeal. While she wins favor for this portrayal, she also has a more serious side, as shown in last year’s production of Other People’s Money at the Delray Playhouse.

While DePrizio gets to show only her acting side, she is also a dancer and choreographer. She is no shrinking violet as Lillian, the no-nonsense agent who knows what she wants and goes for it.

Kuzmirek is just plain doll-like as Deirdre, right down to her unicorn slippers and pixie voice. For a youngster, she has already created a number of characters at Lake Worth. She just finished doing Meet Me in St. Louis and has shown up in Arsenic and Old Lace, South Pacific, Legally Blonde, the Musical and Mame.

Film: Playwright August Wilson began his chronicle of the African-American experience throughout the … END_OF_DOCUMENT_TOKEN_TO_BE_REPLACED

Film: Just in time with the opening of movie theaters in Palm Beach County comes the season’s most … END_OF_DOCUMENT_TOKEN_TO_BE_REPLACED

Music: The very last concert Franz Joseph Haydn attended in his life was in March 1808, about a year … END_OF_DOCUMENT_TOKEN_TO_BE_REPLACED