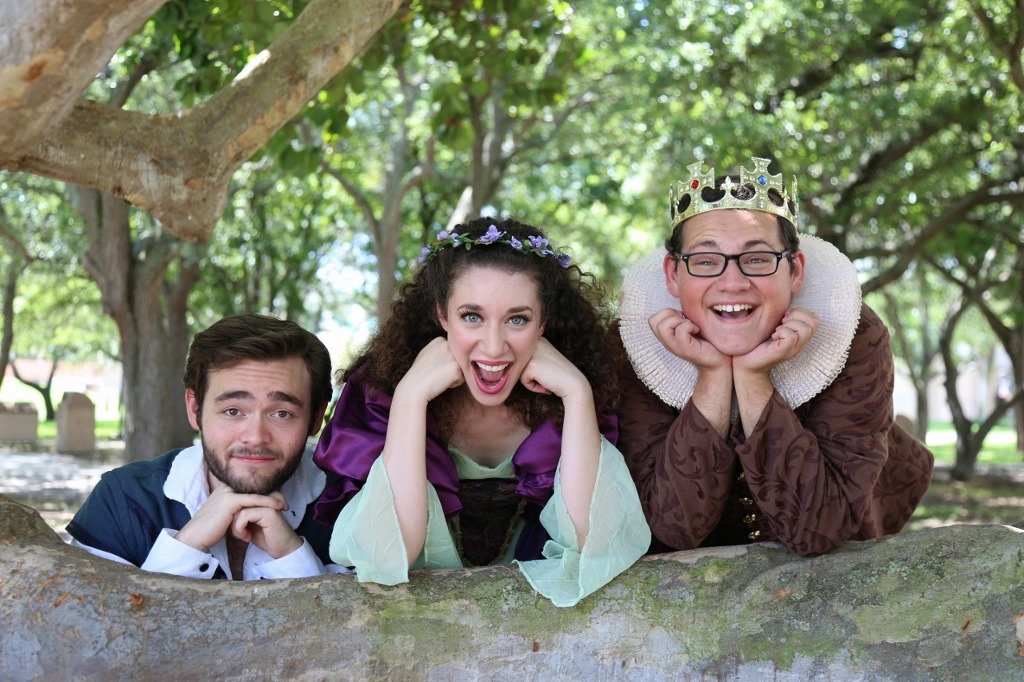 Connor Padilla, Emily Freeman and Eytan Deray in Once Upon a Mattress at Florida Atlantic University. (Photo by Viviana Puga)

Those adventurous and sometimes crazy student actors at Florida Atlantic University have spent a lot of time this year taking theatrical journeys into centuries past.

They plumbed the psyche of 17th-century English playwright William Wycherly when they presented his 1675 play, The Country Wife, a few months ago. And the

final production of the regular school year resurrected William Shakespeare’s King Lear in a moving reading of the tale of the mad king and his three daughters.

The FAU troupe has taken a summer jaunt back to a fictional European “1500’s-ish” monarchy for a Renaissance Faire-style production of Once Upon a Mattress, the musical retelling of Hans Christian Andersen’s “The Princess and the Pea.” It’s the second of the two plays FAU is presenting in its annual summer festival repertory through July 31.

Mattress, directed by Bruce Linser, also gives students a summertime opportunity to stretch their acting talents by working with a pair of Equity performers. This show brings Broadway and national tour performer Barry Tarallo and singer, actress and songwriter Maribeth Graham to the Studio One stage. They portray devious Queen Aggravain and King Sextimus (alias The Silent King), the rulers of this medieval land.

This twice Tony-nominated production (Best Revival of a Musical in 1970 and 1997) is funny and charming — and occasionally raucous in the hands of these FAU players. The show, written by Mary Rodgers and Marshall Barer, based on a book by Barer, Jay Thompson and Dean Fuller, was first performed in 1959. It originally starred funny lady Carol Burnett as Princess Winnifred — nicknamed Fred. Student actress Emily Freeman handles those same royal duties in the FAU rendition with sometimes sly, sometimes outrageous humor.

The show focuses on the fervent efforts by Queen Aggravain and King Sextimus to find a wife for their son, Prince Dauntless the Drab (Eytan Deray). The nasty queen puts potential candidates through an unfair test that’s impossible to pass. By her estimation, no one is good enough to marry Prince Dauntless, she sings in “An Opening for A Princess.”

Others in the kingdom are bummed out because the queen has prohibited anyone from marrying until Dauntless takes a wife. The crisis escalates when the leading knight of the realm, Sir Harry (Jordon Armstrong), discovers that his girlfriend, Lady Larken (Tara Collandra), is pregnant.

Sir Harry decides he will set out to find a princess himself (“In a Little While,” he sings). He locates Winnifred the Woebegone, an unrefined woman who lives in a swamp. She arrives at the castle by swimming the moat. She charms Dauntless and others — all except the queen, who despises her and vows to stop her from becoming Mrs. Dauntless.

With songs and other machinations, the play moves into its final stages. The evil queen demands that her cohorts collect 20 mattresses and a pea for a test she has devised, one she hopes Winnifred will fail. As in all good fairy tales, the queen doesn’t prevail. Her son finally speaks up to his domineering mom, breaking the spell that has kept his father mute for many years.

In the end, as they say, everyone lives happily ever after.

The audience is happy, too, because the play is an enjoyable bit of comedy mixed, no doubt, with lots of ad-libs. Graham does an outstanding job as the overbearing mother, and Tarallo, though silent, tells a lot with his body movements.

Among the students, Freeman does wonders with her Winnifred portrayal. Armstrong, as Sir Harry, and Connor Padilla, who portrays the minstrel, are familiar faces who carry out their roles with ease and wit. Ross Frawley, who portrayed King Lear, comfortably takes command of his wizard portrayal.

Deray’s round face and child-like charm make him the perfect candidate to portray Dauntless the Drab, and he does so effectively. Marino does yeoman duty, taking on five roles in this play.

Once Upon a Mattress, presented by FAU’s Department of Theatre and Dance, continues through July 31 in the Studio One Theatre on the Boca Raton campus. Tickets are $20 and can be purchased atwww.fauevents.com or 800-564-9539.

Film: Playwright August Wilson began his chronicle of the African-American experience throughout the … END_OF_DOCUMENT_TOKEN_TO_BE_REPLACED

Film: Just in time with the opening of movie theaters in Palm Beach County comes the season’s most … END_OF_DOCUMENT_TOKEN_TO_BE_REPLACED

Music: The very last concert Franz Joseph Haydn attended in his life was in March 1808, about a year … END_OF_DOCUMENT_TOKEN_TO_BE_REPLACED