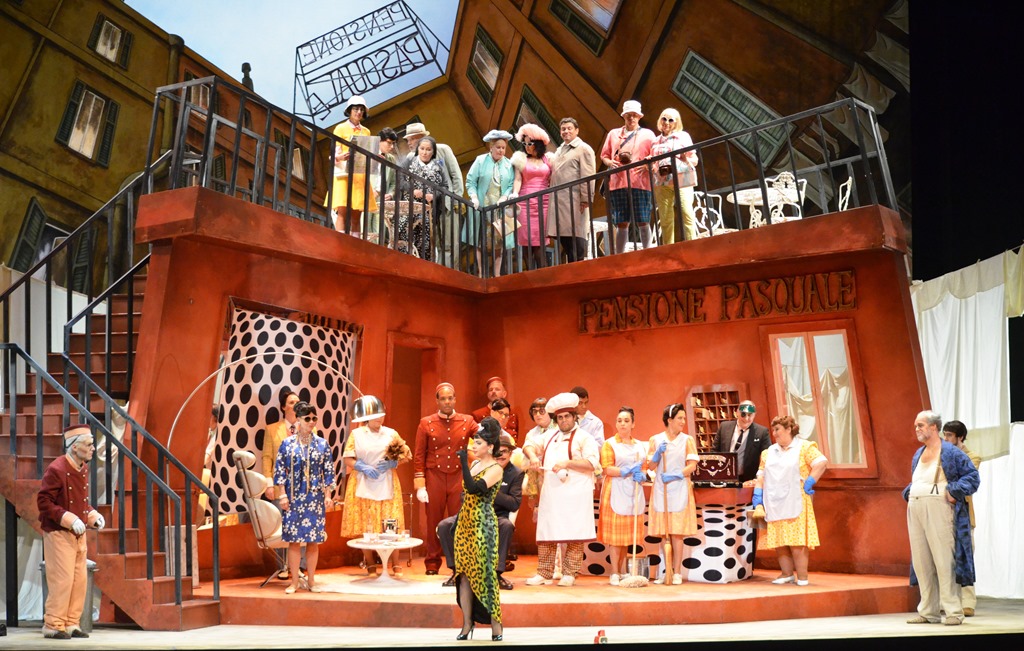 The finale of Don Pasquale, at Florida Grand Opera. (Photo by Lorne Grandison)

Two of this area’s opera companies bookended the season with Gaetano Donizetti’s Don Pasquale, with the Palm Beach Opera doing a 17th-century take on the early 19th-century setting in which this 1842 opera was initially set.

The production of Don Pasquale now showing at Florida Grand Opera in Miami is at the complete opposite end: Here, the action has been moved up to 1965, with its title protagonist featured as the proprietor of a rundown Roman pensione.

The production was conceived for Scottish Opera by the Franco-Canadian duo of director Renaud Doucet and set designer André Barbe. The two have mounted several productions at FGO, with varying success, such as the Carmen of 2010 in which chairs played a prominent and ultimately irritating role, and a Contes d’Hoffmannthe following year in which a supernumerary Jacques Offenbach raced in and out of the scenes, a clever idea that didn’t quite come off.

Doucet-Barbe conceptions tend to be overstuffed with ideas that get in the way of the show. But this Don Pasquale, crowded and zany as it is, works (though only if you’re willing to sacrifice some things; more on that later). Perhaps the good people at Scottish Opera were able to rein the two in enough to allow their invention to support rather than to smother the production.

Barbe’s set is brilliant; the reception room of the Pensione Pasquale looks off-center, and behind it is the rest of the off-kilter building, with a sign falling to ruin and lighting designer Guy Simard’s harsh sun shining down on what no doubt is a dubious neighborhood. Its burnt-orange colors and nuclear-nightmare-green cat statuettes are reminiscent not so much of Fellini but Almodóvar, and give a visual sense of anything-goes that immediately puts the audience in the story.

During the overture, a fotoromanzo (a comic book featuring photos of celebrities instead of cartoons) unfolds on the scrim, giving us a little backstory on the opera to come and giving us a good initial idea of Pasquale’s world — he is allergic to his beloved cats, and has to replace them with the 10 statuettes; he likes to eat in his undershirt and robe while watching TV — and the plotting that has gone on already to secure his blessing for the wedding of his nephew Ernesto and his beloved Norina. 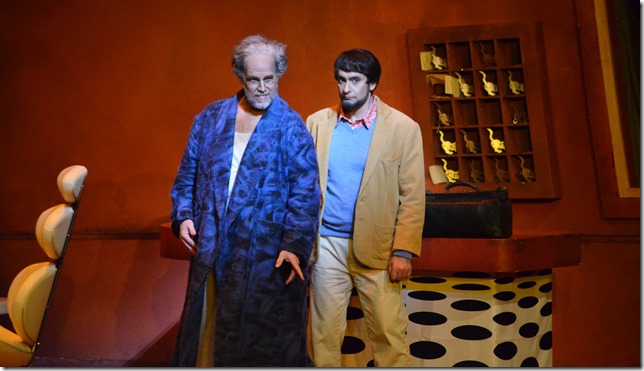 Singing the title role is the American bass-baritone Kristopher Irmiter, and it is his show from overture to finale. He has a big, distinctive voice that rumbles along in an engagingly comic way, and he sings with precision and warmth. He is thoroughly delightful in his acting as the hapless Pasquale, believable and endearing, and someone for whom you feel real empathy when he receives an unexpected gift from Norina just before the curtain.

This is likely to be a good career role for Irmiter. It fits his voice well, and this production brings out his native gifts as a comic actor beautifully.

The Romanian-American soprano Laura Tatulescu was an excellent Norina on opening night Saturday at the Ziff Ballet Opera House. Her voice is powerful without being particularly large, and she sang the flourishes of things like “Caro sposino” with fluidity and accuracy. She made a persuasive Sofronia, bossing Pasquale about and running the up the bills, but it would have been good to see more of her romantic side with Ernesto; Pasquale and Malatesta ended up being more of the focus in the garden scene than the two lovers. 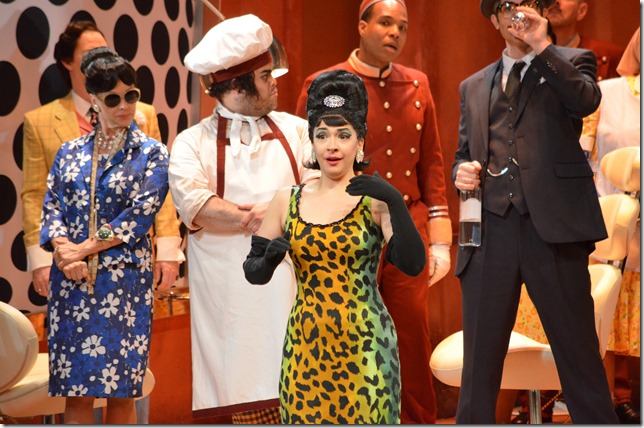 Ernesto was sung by the Spanish tenor Jesus Álvarez, who has a sweet spinto sound that was smooth but somewhat underpowered. It blended well with Tatulescu’s soprano, and in his acting, he was suitably eager and passionate. The Italian baritone Marco Nisticò, a familiar face in productions throughout South Florida, was a good Dr. Malatesta, though his nice, creamy sound was also somewhat lacking in presence. He does a fine job of being the center of activity when putting this plot in motion.

Ramón Tebar directs the fine Florida Grand Opera orchestra with his usual vigor, and unfortunately, his usual propensity to slow down the tempo at key dramatic moments (the Act II quartet, for instance) so that the music is almost in freeze-frame. This always drains the scenes of momentum, and it takes the show a few moments to get back on track afterward. But the orchestra itself sounded mostly splendid and appropriately bubbly.

Katherine Kozak’s chorus was strong in full complement, somewhat weaker when the men were bustling about by themselves. The three key supernumeraries, a cook (Edgar Miguel Abréu), a maid (Margie Elias Eisenberg) and a porter (Brian James Myer), were given a good deal of mugging to do, and indeed the opening night audience fell for Eisenberg, with her cigarette and attitude of studied insolence. Barbe’s costumes, like his set, were extravagant and well thought-out; he knows his design history, and the transformation from decrepitude to Swinging Sixties modernism in the lobby was striking and memorable.

This is a good Don Pasquale in most respects, and its setting is fun and never bores the audience, which always has something to look and laugh at, and the opening night house seemed to really enjoy it. Doucet gives his players plenty of business, but not too much to upstage the rest of the action.

The problem with his Pasquale, however, is that the concept is the dominant player here, not the singers. Directorial decisions are made in service to the set, not the story; thus, Norina appears on a balcony at first, and Ernesto sings his Act III serenade completely offstage. We don’t get a good sense of these two characters, and their solo music gets lost in the shuffle, so that by the end of the show, we don’t really care if they’re together or not. They’re a device, not a couple.

The focus is on Don Pasquale, and on the opportunity to milk the Sixties setting for visual gags, and in that sense, it’s a delight, and newcomers to the opera would be forgiven for thinking that this is solely an old man’s story. But Donizetti, who also had a hand in the libretto, gave us a more straightforward piece than that, in which each character gets a chance to explain himself or herself to the audience. And without that, thisPasquale misses the mark.

Don Pasquale will be performed on Friday and Saturday night at the Ziff Ballet Opera House, Miami. On Friday night, Elena Galvan sings Norina and Daniel Bates is Ernesto. For tickets and more information, call 800-741-1010 or visit www.fgo.org.

Film: Playwright August Wilson began his chronicle of the African-American experience throughout the … END_OF_DOCUMENT_TOKEN_TO_BE_REPLACED

Film: Just in time with the opening of movie theaters in Palm Beach County comes the season’s most … END_OF_DOCUMENT_TOKEN_TO_BE_REPLACED

Music: The very last concert Franz Joseph Haydn attended in his life was in March 1808, about a year … END_OF_DOCUMENT_TOKEN_TO_BE_REPLACED