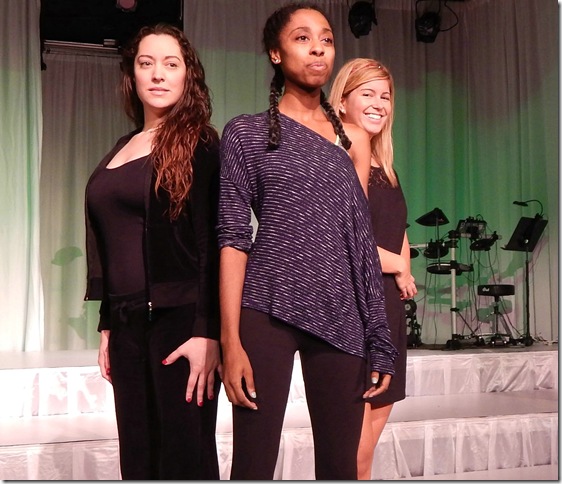 Aretha Franklin sang the definitive song about respect, but it was Vanderbilt University professor Dorothy Marcic who wrote the definitive book on the subject.

Her tome, Respect: Women and Popular Music, traces the upward progress of women through the 20th and early 21st centuries as reflected in the music popular during different eras. The book morphed into the musical, Respect: A Musical Journey of Women, now being performed by four talented vocalists from the Boca Raton Theatre Guild at the Cultural Arts Center in Mizner Park.

Directed by Peter J. Loewy, who was also the guiding hand behind the productions in West Palm Beach, Fort Lauderdale, Chicago and Los Angeles, Respect recounts the story of women on the way up, from their dependency period of the early 1900s through the confidence-building 1960s to the early 21st century, where they face a whole new set of dynamics.

Sharyn Peoples, herself a vocalist of note, is the narrator who occasionally jumps into the musical fray where performers Carla Bordonada, Nicole Kinzel and Ziarra Washington share the melodies. Occasionally, one of them steps out for a solo.

The show uses Top 40 tunes to tell the tales. Performers offer up portions or entire renditions of 60 songs, including Someone to Watch Over Me, My Momma Done Told Me, Stop in the Name of Love, What’s Love Got to Do with it and Hero. Peoples crisscrosses the stage, talking about the messages touched by the songs, such as lost love, relationship issues, “he done her wrong” bluesy stuff, finding jobs and gaining independence.

As Peoples tells it, the voice of women, as told in pop music, shifted from their early neediness and dependency role to the Helen Reddy boast, “I am woman, hear me roar” and the Gloria Gaynor statement: “I will survive.”

Tunes steeped in cling-on sentiment come from both halves of the century. I Fall to Pieces was Patsy Cline’s lament. Little Peggy March gladly bragged, I Will Follow Him in the 1960s. And the attitude expressed in Can’t Help Loving That Man of Mine, from Jerome Kern’s 1927 musical Show Boat, intoned by Peoples with excellent woefulness, was as restrictive as the corset used by the performers to show how such an antebellum attitude held women back.

The singers do allow themselves to yuk it up. While Bordonado, Kinzel and Washington are singing Bobby’s Girl, photos of famous “Bobbys” flash on screens behind them — Bobby Kennedy, Bobby Rydell, Bobby Vinton and Bobby Darin. The humor is a nice counterpoint to the moments that center on some broader historical moments. Respect evokes such iconic figures as Rosie the Riveter of World War II fame and civil rights pioneer Rosa Parks.

The performers also pay tribute to the black women who first vocalized the pain of their personal lives, long before white performers like Peggy Lee and Julie London honed the “torch song” genre. Washington bows to the likes of Billie Holiday and Ethel Waters with superb renditions of God Bless the Child and Ain’t Nobody’s Business.

The other women don’t just rest on their laurels. Bordonado, for example, does a fetching delivery of Whatever Lola Wants, posing suggestively in this fun number based on the power of women’s sexuality. Kinzel has her moment as well, as Betty Boop, in I Wanna be Loved by You.

The last of the guy-dependent stuff begins to fade with such tunes as Tammy and Annette Funicello’s bubble gum song, Tall Paul. Kinzel does a wonderfully tearful rendition of It Must Be Him, and all four performers don black cowboy hats to skewer Tammy Wynette’s Stand by Your Man.

Peoples is probably the best known of the vocalizing quartet. Fresh from roles in Next to Normal and Spamalot, in addition to a stint in Sounds of Simon, she keeps the show flowing with tunes and talk.

A New Yorker whose vocal abilities shone in Broward Stage Door’s production of Sophisticated Ladies, Washington has solid musical credentials. Though still a newcomer to South Florida, she has already demonstrated her vocal chops at the Kravis, City Place and Seminole Hard Rock, among others.

Bordonado combines terrific stage presence with a superb voice.And she’s not afraid to take center stage to offer up a ballad or a comic tune.

With a childlike voice and giddy laugh, Kinzel’s the perfect Betty Boop for this stage. But she’s also moving on up and joins the cast of Outré Theatre’s musical, The Journey, when Respect closes.

The girls have their own support system on this stage – a trio featuring Musical Director Phil Hinton on keyboards, Ranses Colon on bass guitar and Tom Hinton on percussion. Kevin Black keeps the toes tapping with his precise choreography.

Film: Playwright August Wilson began his chronicle of the African-American experience throughout the … END_OF_DOCUMENT_TOKEN_TO_BE_REPLACED

Film: Just in time with the opening of movie theaters in Palm Beach County comes the season’s most … END_OF_DOCUMENT_TOKEN_TO_BE_REPLACED

Music: The very last concert Franz Joseph Haydn attended in his life was in March 1808, about a year … END_OF_DOCUMENT_TOKEN_TO_BE_REPLACED