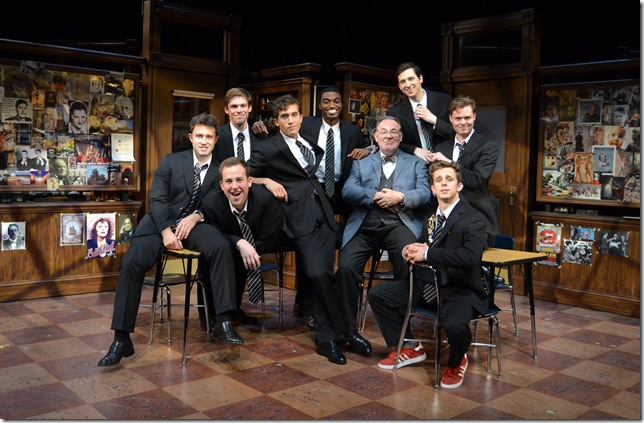 England’s Alan Bennett first came to prominence in the early ’60s, as one of the four collegiate satirists who wrote and performed an evening of sketch comedy called Beyond the Fringe. It was fairly cerebral as revues go, but it did not suggest the major playwright Bennett would become, penning such thought-provoking, yet still entertaining scripts as The History Boys, on the nature of education in the Thatcher era.

Yes, that still sounds awfully dry and undramatic, but in the hands of Palm Beach Dramaworks’ resident director, J. Barry Lewis, and a first-rate cast, it becomes a highly theatrical, satisfying experience.

Set in a boys’ school in northern England — probably not far from where Billy Elliot was toiling at ballet — the History Boys are eight keenly smart and smart-alecky seniors, the students of a memorable, though unconventional teacher named Hector (the sublime Colin McPhillamy). His course is called General Studies, which has a vague enough syllabus to allow him to stretch the minds of his young charges as he sees fit.

Hector believes in education for its own sake, but the school’s headmaster (Rob Donohoe) wants quantifiable success as measured by how many boys get accepted into prestigious Oxford or Cambridge. So he brings in pragmatic Irwin (Cliff Burgess) to coach the class in excelling at the entrance exams of those schools. Thus sets up a universal struggle between education for its own sake and that Florida bugaboo, “teaching to the test.”

Bennett is clearly a proponent of the former, but rather than stack the deck in Hector’s favor, the playwright makes him deeply flawed. Yes, he is a great teacher, but he takes sexual liberties with the boys, diddling with them as they accept rides from him on his motorbike. Thus the play follows two arcs — the upward progress of the students and the downward spiral of doomed Hector.

All the while, The History Boys is packed with literary allusions and wordplay. Bennett even risks losing his audience by writing one lesson plan entirely in French. It is a play that demands close attention, but your leaning in and careful listening will be well rewarded.

The rotund McPhillamy — previously featured at Dramaworks in Copenhagen, Exit the King and Our Town — is a literature-spouting Falstaff with a classroom of Prince Hals. He is the teacher we all wish we had, a man who genuinely loves to teach. And when that is taken from him, the pain is palpable. 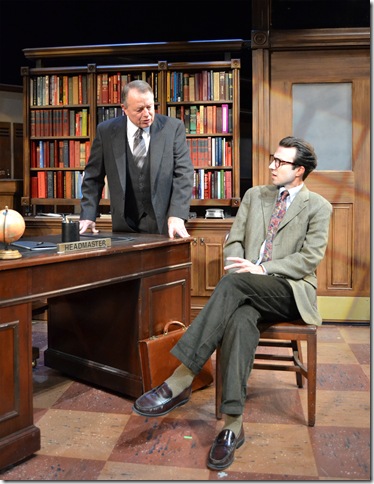 Wiry Burgess is a contrast to McPhillamy in every way. He cares nothing about teaching, which to him is simply a stepping stone to his own goals of media fame and political power. Angie Radosh plays Mrs. Lintott, the play’s sole female presence, a lowly faculty member at a distinct disadvantage in the male-dominant world of academia.

As important as the above are, the play hinges on the performances of the eight students, well-cast and molded by director Lewis into an ensemble of vivid individuals. Standouts among them are John Evans Reese (as gay, Jewish Posner), Nathan Stark (sexually savvy Dakin) and Kyle Branzel (piano prodigy Scripps).

Victor Becker’s scenic design, a series of manually swiveled, shifted and interlocked room fragments, is a visual equivalent of the intricate script. The History Boys is a very Dramaworks play, the sort of word-heavy material that so many other South Florida theaters shy away from. That the company does such a winning job with it is further proof of the exceptional, ever-challenging troupe in our midst.

Film: Playwright August Wilson began his chronicle of the African-American experience throughout the … END_OF_DOCUMENT_TOKEN_TO_BE_REPLACED

Film: Just in time with the opening of movie theaters in Palm Beach County comes the season’s most … END_OF_DOCUMENT_TOKEN_TO_BE_REPLACED

Music: The very last concert Franz Joseph Haydn attended in his life was in March 1808, about a year … END_OF_DOCUMENT_TOKEN_TO_BE_REPLACED