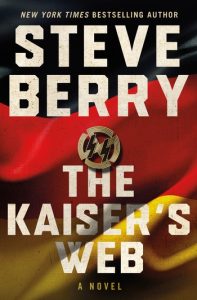 One of the world’s best-selling thriller writers recently moved to Orlando, does most of his research in Jacksonville and has raised money for the Palm Beach County Library System and the Delray Beach City Library, as well as a dozen other in-state libraries.

Steve Berry also spoke to Palm Beach donors about Smithsonian Libraries. He ultimately raised $50,000, via a private tour of the Smithsonian Castle. Some locals participated and it was taped by C-SPAN.

The author’s new novel is The Kaiser’s Web, the 16th book in his wildly popular Cotton Malone series. Since 2003, Berry has sold 25 million copies of his 20 novels in 52 countries, in 41 languages; Bengali is the latest. (The books do not need to be read in order.)

His thrillers combine thought-provoking intellect and intriguing history lessons with action/adventure. No spoilers here, but The Kaiser’s Web begins with a spy and poison. A plane is shot down. Two passengers. One parachute. By page 15.

“And they fell from the plane.”

So how do you top that?

The book’s villain “sipped his wine and thought a moment, considering his adversaries.”
“…after their usefulness has waned, kill them both.”

Keep in mind, this book is set in the German political scene generations after World War II and the Holocaust. There is no lack of evil protagonists, both living and dead. Some are still following orders.

The plot: a secret dossier from a World War II-era Soviet spy contains a bombshell revelation. If true, it could rewrite history and affect not just Germany’s elections but all of European politics.

Two candidates are vying to become chancellor of Germany. One is adept at stoking nationalistic hate. Picture him in a velvet smoking jacket, sipping cognac and polishing the authentic gold swastikas on his gleaming knife collection. The incumbent is decent but tired and losing ground with voters. Both candidates harbor dark secrets about the other and are considering blackmail.

The challenger’s campaign theme, “There is no longer a need for any of us to feel shame at the folly of another generation. We have atoned for the sins of the last Reich.”

The plot turns a what-if: Did Adolf Hitler and a few of his more monstrous cohorts survive the war? This theme is a genre comprising several hundred books, Berry said.

Did Hitler and Eva Braun die in the Berlin bunker? Or did Braun and Hitler’s diabolical henchman, Martin Börmann, escape?

Our hero, Cotton Malone, goes to Chile, South Africa and Switzerland to find out.

The Kaiser’s Web is a high-class combination of The Boys from Brazil meets Remains of the Day. It’s more substantive than the former and faster-paced than the latter. Our hero also searches for a fraction of the billions in Nazi loot that disappeared at the end of the war.

Berry explains that Nazi leaders knew the war was lost. In August 1944, they began shipping plundered treasure from all over Europe to South America. Americans paid a fortune to rebuild Germany under the Marshall Plan, but had the Nazis’s ill-gotten gains stayed in their country, the Germans could have paid for it themselves, the author writes. Meanwhile, many thousands of Nazis fled to Chile, Argentina and elsewhere, to live out their days in comfort.

Berry digs up these gems and more at Jacksonville’s Chamblin Book Mine, one of the largest bookstores in the world, where he has bought 300 to 400 books.

In 2008, Berry retired from 30 years of practicing divorce law in Atlanta. Within a couple years he and his wife, Elizabeth, moved to Florida. They briefly lived in St. Mary’s, then the next 10 years in St. Augustine.

“We moved for a change … St. Augustine, the oldest continuous European settlement in North America seemed to call to us,” Berry said.

Referring to rising nationalism and bitter rivalries in Europe, Berry muses, “’The Kaiser’s Web’ has more resonance now, than when I wrote [its precursor], ‘The Devil’s Gold,’ 10 years ago.”

Because history repeats itself (only the players change, not the stakes or the game, Berry writes) he is strongly concerned with preserving American heritage and is doing something about it.

In 2009, Berry and his wife founded the nonprofit History Matters and have raised $2 million by giving four-hour writers’s workshops to more than 3,500 students. The money has helped preserve and conserve historic sites such as the homes of Mark Twain, James Thurber, Edgar Allan Poe and the Lincoln log cabin.

“I am not a proponent of erasing the past. It should be studied and analyzed … When you want to purge history and sanitize it based on today’s conditions, you run the risk of forgetting what actually happened,” Berry said.

He quoted from John Steinbeck’s Grapes of Wrath, “How will we know it’s us, without our past?”

Berry warned that manipulating and fooling the public is, “Absolutely worse now because of the internet. Hitler and Goebbels had the Big Lie; they did quite a bit of damage without the internet. Imagine if they had today’s resources.”

Berry’s smooth, aristocratic would-be chancellor “possessed a survival instinct that, above all, dominated his every thought. True, the world had changed, but in many ways it remained the same as eighty-five years ago. Hate still existed. Bigotry could be manipulated. The masses were still gullible.”

Sharon Geltner is the author of the Palm Beach novel Charity Bashed, which
can be found in area libraries, bookstores and Amazon.

Film: Playwright August Wilson began his chronicle of the African-American experience throughout the … END_OF_DOCUMENT_TOKEN_TO_BE_REPLACED

Film: Just in time with the opening of movie theaters in Palm Beach County comes the season’s most … END_OF_DOCUMENT_TOKEN_TO_BE_REPLACED

Music: The very last concert Franz Joseph Haydn attended in his life was in March 1808, about a year … END_OF_DOCUMENT_TOKEN_TO_BE_REPLACED