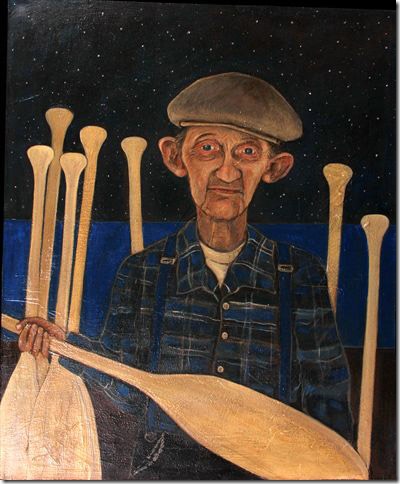 A self-proclaimed contemporary folk artist who used to create faux-Pompeii scenes for a South Beach nightclub is currently paying tribute to nimble nonagenarians in a series of paintings on exhibit this month at Fort Lauderdale City Hall.

In the summer of 2008, Nava went fishing with Oveson on Lake Kabetogama, on the Minnesota-Canada line. The 94-year-old professional guide, whose small frame weighs but 90 pounds, counts President Harry Truman as one of the clients he’s had over the course of a long career.

On a 37-inch-by-30-inch canvas, Nava depicts Oveson against a starry, predawn sky holding paddles that he hand-carved from trees he planted himself. Nava’s straightforward realism has a sense of naiveté that helps the viewer feel part of the scene.

You can almost feel Oveson’s toughness and determination, but also that he has a down-to-earth kindheartedness. “During World War II, LeVerne was sent to the Aleutian Islands to train soldiers to survive in extreme conditions,” Nava said. “He also flew small planes into the northern bush, although he never had a license.”

In 2007, Nava was fascinated with an exhibit of Gee’s Bend quilts at the Museum of Art Fort Lauderdale. The quilts were made by the descendants of former slaves and tenant farmers who have lived for generations in the Rehoboth and Boykin areas of Alabama.

“I was determined to go to Alabama where the quilts were made,” Nava said. “There is a ferry that takes you across the bend in the river to the small community of families that have lived there since before the Civil War. The workshop and gallery are welcoming and unpretentious.

“I inquired as to who was the oldest quilt maker, and I was brought into the workshop to meet Allie Pettway. At 93 years of age, she was smiling and busily working. The quilt in the painting is one of her creations that is [currently] in a New York art gallery.” 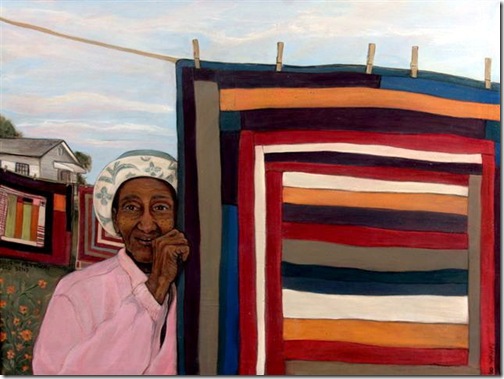 Nava’s skill at capturing a subject’s personality is evident in her portrait of Pettway, who peeks from behind her colorful geometric quilt, her flowered hat framing her joyful face, as she shyly shows off her labors. In the 41-inch-by-53-inch painting, other quilts on the clothesline behind her are visible, as is the top of a humble home.

A tribute to the never-ending hope for romantic love is captured in a 54-inch-by-64-inch painting titled Happy Birthday, Ag & Ed. When Ag and Ed each were 82 years old and widowed, they met at Century Village, Nava said.

“When Ag met Ed for the first time, she told me that he was the handsomest man she’d ever seen. They fell in love, and she walked down the aisle in a long, white dress with white roses and daisies,” she said. “In their 12 years as husband and wife, they have traveled to Paris and taken numerous trips across country by train. They are 95 years old now and still going strong.” 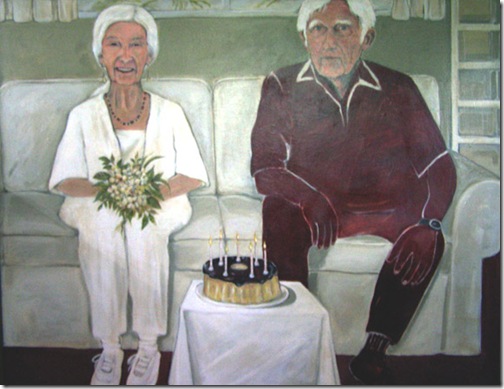 Nava has depicted the happy couple sitting on a couch about to blow out candles on a cake. The celebratory image seems like a snapshot taken by an amateur photographer who accidentally has cut off the top of Ed’s head in the image. But this technique brings to the painting a strong feeling of intimacy.

Nava, who grew up in the South Bronx in the 1950s and studied art in Chicago, spent 15 years as the resident artist for Twist Nightclub of Miami. There she annually transformed the South Beach club, creating scenes of such places as

All of this experience and inspiration blends into a style that incorporates muted colors and earthy tones such as maroon and rich greens. Interestingly, she paints with ordinary house paint, believing that it “brings a harmony to the eye of what we see in our environment.”

Her paintings range from portraits of South Bronx residents to birthday-cake still-lifes. In the Living Treasures series, she has created works that are touching for their sensitivity and ability to tell stories.

LIVING TREASURES, which is sponsored by the Broward Art Guild, runs through Oct. 30 at the Fort Lauderdale City Hall, 100 N. Andrews Ave. Hours are Monday through Friday from 7:45 a.m. to 4:45 p.m. For more information, call City Hall at (954) 828-5000 or contact JoAnn Nava through her Web site at www.joannnava.com.

Film: Playwright August Wilson began his chronicle of the African-American experience throughout the … END_OF_DOCUMENT_TOKEN_TO_BE_REPLACED

Film: Just in time with the opening of movie theaters in Palm Beach County comes the season’s most … END_OF_DOCUMENT_TOKEN_TO_BE_REPLACED

Music: The very last concert Franz Joseph Haydn attended in his life was in March 1808, about a year … END_OF_DOCUMENT_TOKEN_TO_BE_REPLACED