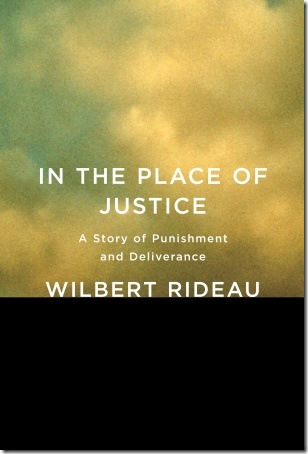 Wilbert Rideau was 19 when he impulsively decided to rob a bank in Lake Charles, La., so he could flee to a new life on the West Coast. The botched 1961 robbery ended with Rideau taking three hostages. In the ensuing chaos he fatally shot and stabbed a female bank teller.

Rideau was black and the victim was white, and a seething mob nearly lynched him. He was quickly convicted of murder and sentenced to death.

In the Place of Justice is Rideau’s meticulous account of his 44 years behind bars, during which he became a model prisoner and won national awards for his work as editor of a prison magazine.

Rideau describes the brutal reality of rape, gangs and violence inside Louisiana’s Angola penitentiary, regarded for years as the most violent prison in America. Between 1972 and 1975, some 67 inmates were fatally stabbed and another 350 suffered knife wounds.

The author documents the racism that pervaded Louisiana’s justice system. In the parish where he was convicted, every black person accused of killing a white person between 1889 and 1976 was sent to death row. Whites who murdered whites during the same period were sentenced to death less than 25 percent of the time. Rideau was convicted in three successive trials by all-white juries, but each conviction was overturned on appeal.

At a fourth trial in 2005 a mixed-race jury found Rideau guilty of manslaughter instead of premeditated murder, and because he had already served more than the 21-year maximum for manslaughter, he was set free.

When Rideau entered prison, he was an angry young man with little formal education, but he began to read books, which “helped me survive the maddening monotony and boredom of the cell.”

He started to write and founded a newsletter for black inmates. Angola’s warden invited Rideau to become editor of the Angolite, a bimonthly prison magazine.

Over the course of two decades, Rideau turned the magazine into a publication that won national honors for its investigative reports about prison conditions. He wrote a piece titled The Horror Show documenting how inmates were burned and perhaps tortured by a faulty electric chair used for executions at Angola. Another exposé documented the plight of inmates who were blind, paralyzed or otherwise severely disabled and yet were routinely denied pardons. The article led to the release of about 20 men.

He became a correspondent for National Public Radio and flew to Washington, D.C., to address a convention of newspaper editors.

Rideau won the trust of inmates and officials alike. He was given wide freedom inside and outside the penitentiary, and became the beneficiary of enlightened prison leadership, which allowed him to publish critical articles without censorship, a unique arrangement in an American prison.

And yet his repeated bids for freedom failed. Year after year successive governors rejected commutation, even as scores of other murderers were freed. Rideau believes it had more to do with politics than anything else. Governors feared the public’s ire if they released a convict involved in a high-profile, black-on-white crime in a community with a virulent racist history.

Rideau comes across as truthful, remorseful, and straightforward. “I had been defined as criminal,” he writes, “but I knew I wasn’t an evil or monstrous person, despite my crime.”

In the Place of Justice is remarkably even-handed and generous. Rideau said he never could have accomplished what he did without the help of many guards and prison officials. Guards loaned him books, and officials granted him wide latitude to pursue stories without interference.

After his release, the author married Linda LaBranche, who had befriended him and fought for his release. Now in his late 60s, Rideau soaks up the little joys of daily life, such as being “mesmerized by the aerial artistry” of hummingbirds in his back yard.

“Having so long dwelled in a hellish place,” he writes, “I recognize paradise when I see it.”

Film: Playwright August Wilson began his chronicle of the African-American experience throughout the … END_OF_DOCUMENT_TOKEN_TO_BE_REPLACED

Film: Just in time with the opening of movie theaters in Palm Beach County comes the season’s most … END_OF_DOCUMENT_TOKEN_TO_BE_REPLACED

Music: The very last concert Franz Joseph Haydn attended in his life was in March 1808, about a year … END_OF_DOCUMENT_TOKEN_TO_BE_REPLACED