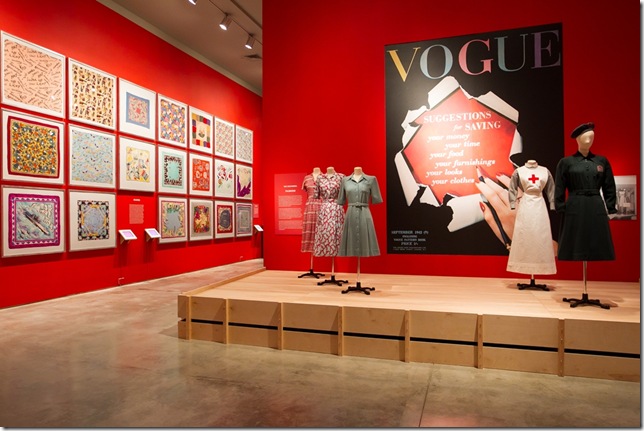 The current exhibition at the Norton Museum of Art, Keep Calm and Carry On: World War II and the British Home Front, is a paean to two kinds of British spirit: Fighting and forward thinking.

Despite the many hardships of war, the political and cultural leadership of the country found ways to “muddle through’’ by setting up new ministries to cope and plan a vision for the future. Victory was at hand in a year or so, we thought. Winston Churchill’s radio messages reinforced this as he mounted his verbal war on Adolf Hitler. But the first two years gave little hope of success.

This exhibit is an overview by American philanthropists of the more philosophical and cultural trends that were set in motion to keep the British public looking forward to what life might be like after the war. The best brains, Oxford and Cambridge dons, were put to work while, ironically, the Cambridge Five, led by traitorous diplomat Kim Philby,  secretly plotted Britain’s downfall.

No blood and guts of war on display here. Just a small mention of the Battle of Britain: 160 enemy planes shot down, to Britain’s 20. Things improved when America came into the war after Pearl Harbor on Dec. 7, 1941.

The exhibition is well-displayed, with clear explanations about the wartime government’s future plans. It’s divided into sections called Design for Fashion and Beauty, Design for Shelter and Protection, and Design for Entertainment and Propaganda. The fashion section exhibits plain dresses done up with colorful Jacqmar scarves to break the monotony of their drabness. I found the furniture section very informative; variations of some designs are with us still.

Upon entering the gallery, one hears Churchill’s rumbling tones saying to President Roosevelt: “Give us the tools and we’ll finish the job.’’ The Lend-Lease plan these two men forged in 1940 gave Britain time to gear up for war, though Roosevelt had detractors at home, led by none other than Charles Lindbergh, first to pilot the Atlantic single-handed. 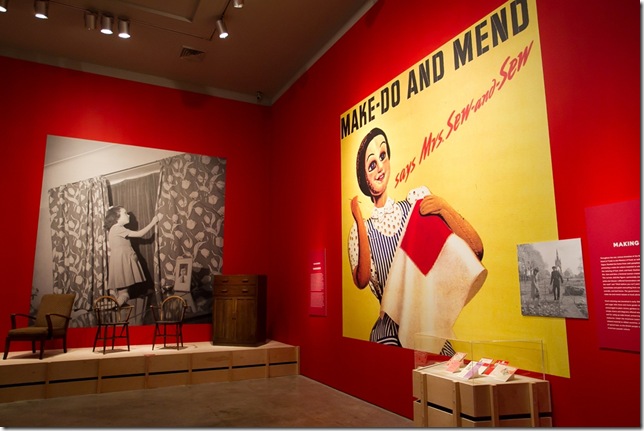 The exhibition is spread over three phases:

1938 to 1945: First, designers and industry set about making public safety shelters against bombing raids; 40,000 civilians were killed and 4 million homes were destroyed. Rationing of food, clothing, gasoline and furniture was then introduced. Schemes like “Make-Do and Mend’’ and “Dig for Victory’’ helped citizens get by. (My own short boys’ trousers had at least five patches sewn on the most worn area: the backside.)

And we dug over my father’s billiard table-smooth lawn to plant vegetables. Going to the movies to see propaganda films involved taking blankets and clutching hot water bottles; heating in cinemas was forbidden. And to build the Anderson and Morrison air raid shelters of steel, the ornamental iron railings around the extensive perimeter of my school were torched and melted down.

Emergency water supply tanks were set up to catch rain water for the firefighters, but the water was static and led to outbreaks of fever: breeding ponds for mosquitoes. During the Blitz, I went with my parents to Manchester Cathedral, where on its west door were posted names of the dead. We crept around in the dark for fear of bumping into unseen objects; there were no streetlights.

And my school assembly hall and gymnasium were bombed, because one mile down the road, the Faery Aviation Works, where Spitfires were made, had been completely camouflaged  to look like a forest from the air. Few, if any, of these everyday aspects of war are covered in this exhibition. Donald Albrecht, the guest curator, falls into a familiar trap, calling Britain “England” in his introductory remarks. Is it any wonder the Scots want to secede? 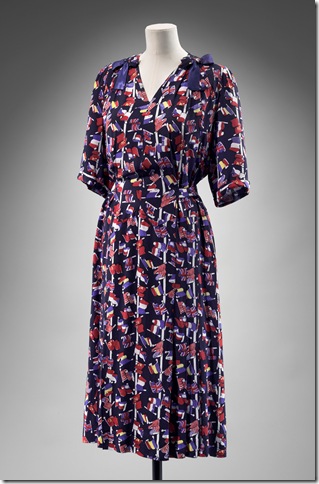 Phase 2. 1945 to 1951: Postwar Britain was a miserable land to live in. Wartime restrictions and rationing continued. Churchill, surprisingly, representing the ruling class, was voted out of office in 1945 and the Labour Party, representing the soldiers and the working class, won a huge majority. Pundits called it the “khaki vote” parliament. Some servicemen went as far as shouting “Joe for King,” referring to Josef Stalin, leader of the USSR.

Among the forward-thinking Englishmen had been Sir William Beveridge, who had a postwar plan for a welfare state. The most significant part of this was his National Health Service, which was adopted by conservatives and socialists alike. Even Churchill praised it publicly. New towns were created from scratch. Culture began to take a front seat. Long the purview of the elite, Sir Kenneth Clark led the Council for the Encouragement of Music and the Arts ― CEMA for short ― which was the precursor of the Arts Council with all its grant money. Music and art flourished with government subsidies. Cinemas hosted live ballet and dance companies, orchestras and jazz concerts. Homes “fit for heroes” were erected.

Taking the lead from Danish and Scandinavian architects, modernity took root with huge blocks of flats or high-rises. The factories turned from making tanks to making cars. And Prime Minister Clement Atlee kept repeating, ad infinitum, “We must increase our exports.” The Jaguar XK120 was born, and film star Clark Gable took delivery of the first  model imported to America. 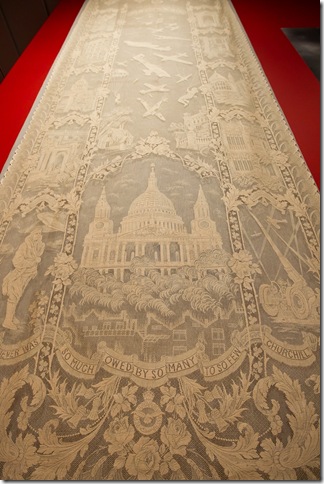 Phase 3, 1951: This section of the exhibit deals with the Festival of Britain, the apotheosis of all the forward-thinking set in motion, a World’s Fair of British goods and scientific achievements mounted on the formerly bombed site of London’s South Bank by the River Thames. A loop film shows King George VI, looking deathly ill (he died a year later), being welcomed by both prime ministers, Churchill and Atlee.

The only building still standing from 1951 is the Royal Festival Hall, a magnificent creation for symphony concerts and ballet. In the background of the film is the Shot Tower, a tall industrial red brick chimney that withstood Nazi bombs. It became a symbol for conservationists who objected to having it pulled down. The National Theatre now stands on this bombed acreage.

Sixty years on, I would say the aims of the worthies who wanted a “better Britain, with decent housing and a fairer, more egalitarian postwar society’’ came close to their goal. While class distinction still rankles, I visited Britain this June (2012) and found the place humming along, despite the endless economic squeeze. Its people were happy and businessmen and women were smartly dressed. With clean streets in this Diamond Jubilee year and a new Olympic Stadium, London ran like clockwork, thanks to GPS. 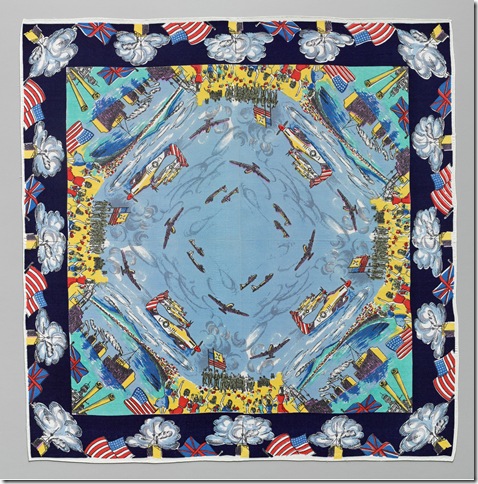 Other great provincial cities also had their rebuilding plans. They have moved from the dark satanic mills of Victorian times to trendy sidewalk cafes, all-night restaurants, well-lit streets, carefully phased-in modern buildings and a new pride in being British, now that its interest in Empire has become mostly symbolic.

But if you, dear American reader, want a glimpse of what things could have been like, then go see this exhibition and thank your lucky stars you lived in the land of the free and the home of the brave on this other side of the Pond, while our joint forces defeated Hitler.

(P.S. The “Keep Calm and Carry On” poster, introduced in 1939, was later withdrawn because it was thought to be condescending to the “stiff upper lip” Britons. Its message was resurrected at the 2012 Olympics. One of the ubiquitous war posters at the time warned that “Careless Talk Costs Lives.” Spies were everywhere. My father, a member of MI-5, helped catch 36 of them in the last two years of the war, using directional listening devices as they transmitted secrets back to the Third Reich.)

Rex Hearn, a native of Manchester, England, emigrated to America in 1965 and became a citizen in 1999.

Music: The very last concert Franz Joseph Haydn attended in his life was in March 1808, about a year … END_OF_DOCUMENT_TOKEN_TO_BE_REPLACED

Film: Major League Baseball culminates each season with the World Series, but to find the true … END_OF_DOCUMENT_TOKEN_TO_BE_REPLACED