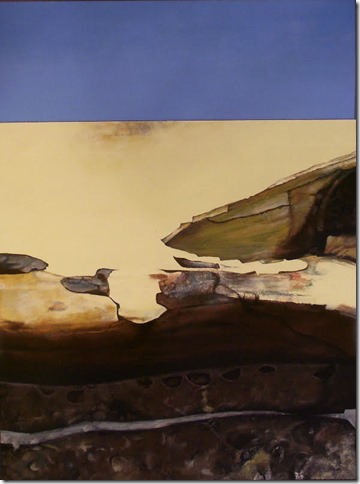 Under a Blazing Sun, by Teresa Frazee.

Artists John and Teresa Frazee have been collaborating on paintings and everything else for more than 40 years.

The couple met as teens while growing up in New York City and they married four years later. They moved to South Florida in 2005 and they live and work in Boynton Beach.

A 20-piece collection of their abstract paintings is on display at the Benzaiten Center for Creative Arts in Lake Worth through April 20.

Their art is uncluttered and pure, the powerful, distinct expressions of two separate but very much connected artists. They are artists at ease with themselves and their art.

Each piece is very much their own, they never add a dab of paint on the other’s painting, but they offer feedback and support on each other’s art. When a painting is 80 percent done, they sit down in their living room and look at it and discuss all the possibilities. 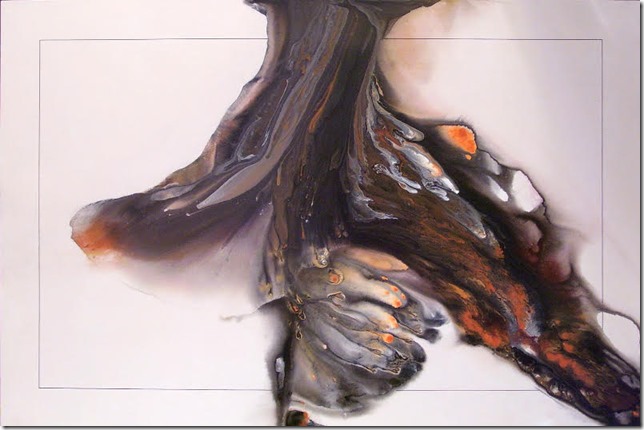 The Enormous Weight of Knowledge, by John Frazee.

Maybe that is why it is so hard to see a mistake or a misstep, an experiment that didn’t quite work, in any painting they present to the world. Everything always seems to work, and in an effortless way.

Their abstract pieces are dynamic in color and composition, with every detail adding to the work as a whole. John’s pieces share his bold visions. Teresa’s pieces are quieter meditations, with recognizable elements, a leaf, a stone, a cloud.

Teresa, a published poet who grew up in Brooklyn, finds inspiration in the South Florida landscape for her paintings.

“To copy nature is not my intention but to portray my spiritual version of it, abandoning all concepts of time and reality,” she says. “Once you see the environment in the light of your own unwavering truth, you never see it any other way.”

John, who was born and raised on the east side of Manhattan, credits the High School of Art and Design for his technical abilities as an artist and Pratt Institute for his creative spirit.

“I have run the gamut of styles and techniques over my 40-plus years in the art field, from photorealism to impressionism,” John Frazee explains. “I now consider myself an abstract expressionist in that I am trying to express my ideas, my innermost thoughts, my deepest feelings about myself and the world I have found myself in.” 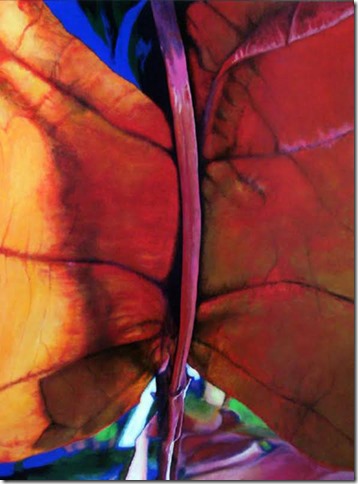 Teresa Frazee describes herself as more of a pure painter and her husband as more of a scientist or a mathematician working in paint.

Titles of John’s works include Circumventing Time, The Enormous Weight of Knowledge, and Reemergence.

They use the same paints, acrylic, the same frames, the same finish, and they paint on masonite hardboard instead of canvas.

Their first collaboration was not with paint but on a dance floor in Brooklyn.

“We met when I was 14. He was 18. We met on the dance floor at a discotheque in Brooklyn called Hullabaloo,” Teresa Frazee remembers.

“From there, we just became an entity,” John Frazee says. 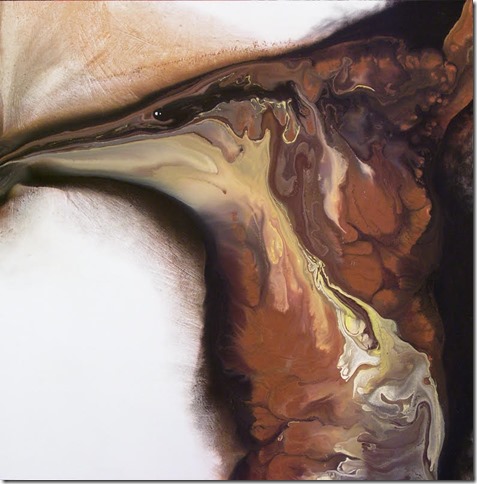 They lived many years in New York, the city, and several years of quieter living in Woodstock, N.Y.

Their home in Boynton Beach has two art studios. 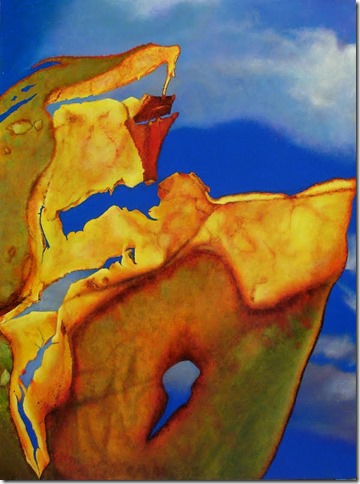 Gleam of Life, by Teresa Frazee.

They meet for meals and living room critiques of each other’s work.

“We feed off each other creatively. We’re very competitive but on a healthy level … We both want to get into competitions and win prizes. We encourage each other.”

For more on the art of John and Teresa Frazee, visit frazeefinearts.com.

The Benzaiten Center for Creative Arts, located at 1105 2nd Avenue South in Lake Worth, is open from 10 a.m. to 4 p.m., Tuesday through Saturday. For more on Benzaiten, visit www.benzaitencenter.org. After April 20, the center will be preparing for an exhibition by glass artist Marlena Rose, set to open on April 29. 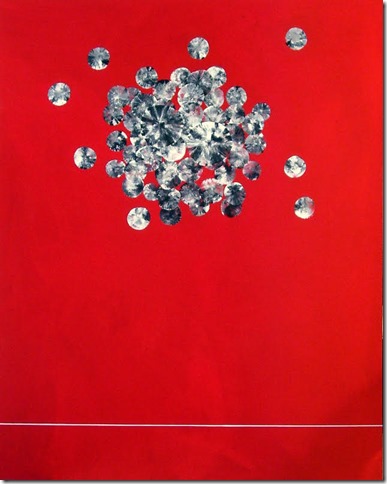 State of Illusion, by John Frazee.

Film: Just in time with the opening of movie theaters in Palm Beach County comes the season’s most … END_OF_DOCUMENT_TOKEN_TO_BE_REPLACED

Music: The very last concert Franz Joseph Haydn attended in his life was in March 1808, about a year … END_OF_DOCUMENT_TOKEN_TO_BE_REPLACED