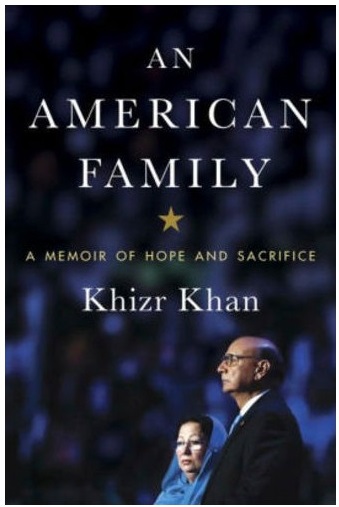 Few people will ever forget the dramatic moment at the 2016 Democratic National Convention when a Muslim-American speaker held up a copy of the U.S. Constitution and challenged Republican Donald Trump to read it.

The speaker, Pakistan native Khizr Khan, had lost his son, Army Capt. Humayun Khan, who was killed in Iraq when he tried to stop two suicide bombers. He won a Bronze Star and a Purple Heart for his heroism. Trump seemed to minimize the son’s sacrifice, while also having suggested that if he were elected president, he might temporarily bar Muslims from entering the United States.

Khan drew thunderous applause when he said, “Donald Trump, you are asking Americans to trust you with our future. Let me ask you: have you even read the United States Constitution? I will gladly lend you my copy.” Khan was convinced that voters would never elect Trump.

In An American Family, Khizr Khan has written a deeply moving account of his early life as the oldest of 10 children in a farm family in rural Pakistan, followed by his patient courtship of his future wife, Ghazala. According to Khan, marriage in Pakistan can be a cumbersome process. He had never dated when he spotted Ghazala on a college campus in Pakistan. He began riding the bus she took to school, hoping to catch her eye, in a culture of arranged marriages. After a long courtship and finally gaining approval from both families, they married.

Before coming to the United States, Khizr and Ghazala lived and worked in Dubai. There they met an American couple who set them up in an apartment, which Khizr interpreted as an extraordinary act of generosity. They eventually moved to America and became U.S. citizens. Khan earned an advanced degree from Harvard Law School, influenced by his grandfather’s mantra that no one is complete until his education is complete. “It had soaked into my spirit, had become my mantra, too,” he writes.

Khan was the first in his family to go to college. From his earliest years he loved books as “my constant companions, my reliable friends.” He could not afford to buy books, so he would read them while standing in a bookstore aisle.

Having grown up in an oppressive society, Khan was astonished by the words of the U.S. Declaration of Independence. Freedom of speech and print were foreign concepts in a nation where newspapers could be shut down for printing something that offended the government.

Khan and his wife were models of compassion. Each Sunday they and their sons packed 50 to 100 containers with rice and beans. They then drove into Washington from their Virginia home and offered the box meals to homeless people on the street.

Having experienced homelessness at various times, the family dedicated themselves to helping those less fortunate. One day, Khan encountered a homeless woman who spoke little English. He brought the woman home and let her live in the couple’s furnished basement, where she stayed for three years.

Khan was mesmerized by the Declaration of Independence, which he read over and over. “I was fascinated, enthralled, as if words from two hundred years earlier had wrestled some sleeping part of me awake.”

An American Family can be read as a celebration of one family’s integration into an America culture that values freedom of religion, speech and press. “Where else, what other country, would allow strangers to join fully, regardless of their wealth or privilege or title?”

The family cherished their newfound freedom in America and could not imagine returning to Pakistan and its crushing totalitarian government, where freedom is a fairy tale.

Film: Playwright August Wilson began his chronicle of the African-American experience throughout the … END_OF_DOCUMENT_TOKEN_TO_BE_REPLACED

Film: Just in time with the opening of movie theaters in Palm Beach County comes the season’s most … END_OF_DOCUMENT_TOKEN_TO_BE_REPLACED

Music: The very last concert Franz Joseph Haydn attended in his life was in March 1808, about a year … END_OF_DOCUMENT_TOKEN_TO_BE_REPLACED