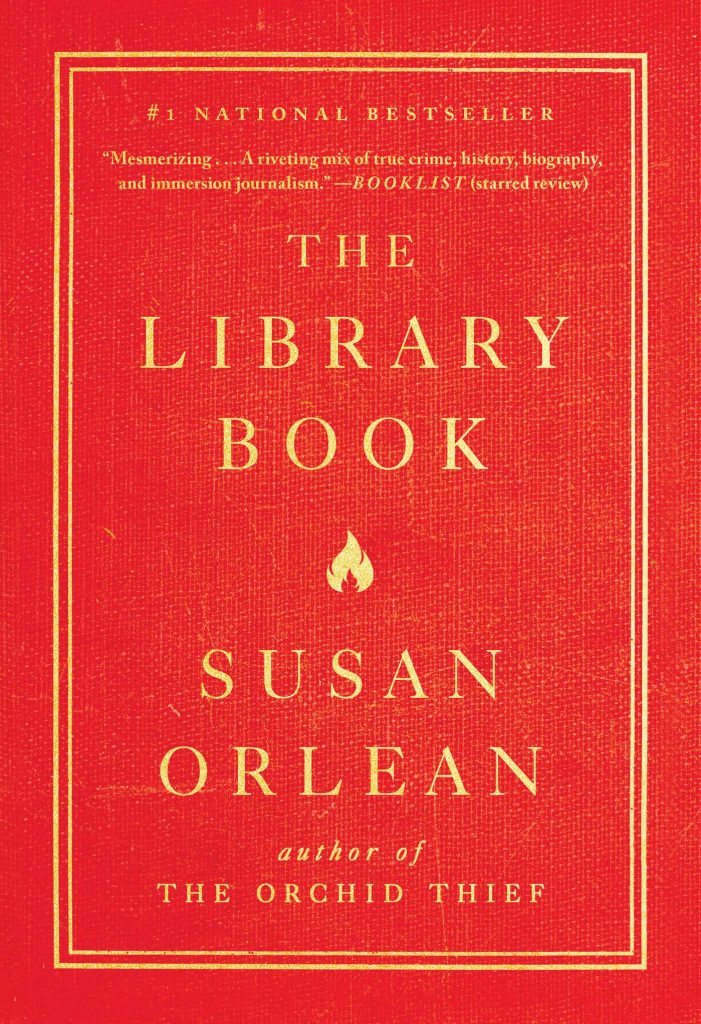 Susan Orlean was living in New York in 1986 when she heard the shocking news that the Los Angeles Public Library had been destroyed by a monster fire. More than 1 million books were burned or damaged, while 350 firefighters battled the blaze for seven hours.

Orlean was raised in a book-loving family where her mother took her to a library near their home in suburban Cleveland several times a week.

“Our visits to the library were never long enough for me,” Orlean says. “The place was so bountiful. I loved wandering around the bookshelves, scanning the spines until something happened to catch my eye. Those visits were dreamy, frictionless interludes that promised I would leave richer than [when] I arrived.”

When Orlean, a successful author, began her own investigation of the Los Angeles Library fire, she focused on the possibility of arson. The chief suspect was a young man named Harry Peak, who dreamed of becoming a Hollywood actor while admitting that he had set the fire. But wait. Peak soon changed his story, saying he had been joking. He went back and forth several times and failed a lie detector test.

Police arrested Peak, but there was no evidence linking him to the fire beyond the fact that he may have visited the library on the day of the fire. He died in 1993 from AIDS complications.

Orlean describes the difficulty of proving arson. “Even the biggest fire can be started with a single match – a slender bit of evidence at best, which is likely to be consumed by what it has started.” Only 1 percent of arson cases end with a conviction. Whether or not Peak started the Los Angeles Library fire remains a mystery.

Orlean is a meticulous researcher who spent several years writing this absorbing book, which is filled with history and nuggets of information. We learn there are more public libraries than McDonald’s in the United States, and libraries outnumber bookstores two to one.

Theft is a common problem for libraries. In 1981, investigators discovered a woman who ran a successful used-book business. All her books had been stolen from the Los Angeles Library.

After the stock market crashed in 1929, book circulation in Los Angeles rose by 60 percent. During the Depression, libraries were “warm and dry and useful and free; they provided a place for people to be together in a desolate time.”

Like many libraries, the Los Angeles Library was short-funded. Before the fire, the city had cited the library for numerous fire code violations. To prevent a collapse of the electrical system, the head librarians banned the use of coffee makers and replaced 75-watt bulbs with 40-watt bulbs, which made it difficult for patrons to read the spines of shelved books.

Throughout history dictators have burned books. The Nazis destroyed 100 million volumes. The Spanish Inquisition promoted book-burning festivals, where people gathered around bonfires that destroyed books deemed to be heretical.

Writing this book, Orlean says, “was my lifeline, my passion, my way to understand who I was. I thought about my mother, who died when I was halfway done with this book, and I knew how pleased she would have been to see me in the library.”

Susan Orlean has written a compelling tribute to books and libraries. For book lovers everywhere, The Library Book is a gift.

Bill Williams is a freelance writer in West Hartford, Conn., and a former editorial writer for The Hartford Courant. He is a member of the National Book Critics Circle. He can be reached at billwaw@comcast.net.

Film: Playwright August Wilson began his chronicle of the African-American experience throughout the … END_OF_DOCUMENT_TOKEN_TO_BE_REPLACED

Film: Just in time with the opening of movie theaters in Palm Beach County comes the season’s most … END_OF_DOCUMENT_TOKEN_TO_BE_REPLACED

Music: The very last concert Franz Joseph Haydn attended in his life was in March 1808, about a year … END_OF_DOCUMENT_TOKEN_TO_BE_REPLACED