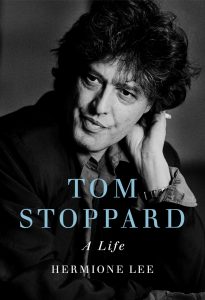 One of the most memorable days I ever spent in a theater was when I saw all three parts of Tom Stoppard’s The Coast of Utopia at New York’s Lincoln Center, a cumulative 8-1/2 hours of pre-revolution Russian history and philosophy.

As the audience left the Beaumont Theatre late that night, ushers were passing out buttons that said, “I survived ‘The Coast of Utopia.’”

True, I only grasped a fraction of the heady, hyper-articulate content of the play, but what an exhaustive and exhausting experience that day in 2007 was.

Exhaustive and exhausting is also an apt description of Tom Stoppard: A Life, the new 896-page biography by Hermione Lee. Previously, the main concern upon encountering a Stoppard play was that your brain would explode. Now, picking up this fascinating, well-researched and thoughtful tome, you risk developing a hernia.

By a widely held assessment, Stoppard is the greatest living British playwright, and I would delete the qualifier “British.” He made his entrance onto the world stage in 1966 at age 29, the youngest — and least-known — writer to have a play premiere at the National Theatre, with Rosencrantz and Guildenstern Are Dead, his cheeky takeoff of Hamlet as seen from the viewpoint of its two most expendable characters.

His latest and perhaps last play — the man is 83, after all — is Leopoldstadt, a consideration of Jewish identity as seen through the lens of a multigenerational Austrian family, said to be one of Stoppard’s most emotional and personal works. (Opened in London’s West End in February of last year to critical acclaim, it nevertheless closed a month later because of COVID-19.)

And in between, there have been dozens of other plays, both major (Travesties, The Real Thing, Arcadia) and minor (Albert’s Bridge, Dirty Linen, Artist Descending a Staircase), and screenplays, both credited (Shakespeare in Love, Empire of the Sun, The Russia House) and un- (Indiana Jones and the Last Crusade, Star Wars: Episode III–Revenge of the Sith, Sleepy Hollow).

Although Stoppard strongly identifies with Great Britain, he was actually born in Czechoslovakia. As biographer Lee details it, he was born Tomas Sträussler in 1937 into a secular Jewish family that fled the Nazis to Singapore when he was only 18 months, a “bounced Czech,” as he would later famously put it.

The Japanese invasion there sent the Sträusslers scurrying to India with 4-year-old Tomas in tow, but minus their father, who was killed by an attack on his exiting ship. The boy learned English at school in Darjeeling, but when his mother remarried a British Army officer named Stoppard, the now-8-year-old lad with the Anglicized name of Tom moved again to England, home of cricket, scones and a rich tradition of theater.

Although he never attended college, he has been showered with a wall’s worth of honorary degrees. Courses about his theatrical output are taught in universities around the world. Whether written for the stage, the screen or radio, his work brims with cerebral ideas as well as puckish wordplay. It is undeniably Stoppardian, a coinage embraced by the Oxford English Dictionary as far back as 1978, defined as “to employ elegant wit while addressing philosophical concerns.”

Still, he has been on the receiving end of his share of criticism, chiefly that his plays lack sufficient emotion and his writing reflects an inability to understand women. Both charges are vehemently refuted by Lee, who makes no pretense of objectivity in her biography. Already well-established — and dubbed a dame — for her biographies of such towering literary figures as Virginia Woolf and Edith Wharton, the difference this time is that her subject is still very much alive. In fact, Stoppard approached her with the idea for this examination of his life and career. He not only gave Lee extraordinary access to himself and his papers, but you can sense him looking over her shoulder as you read Tom Stoppard: A Life.

We get enormous doses of both the public and the private Stoppard. Lee summarizes at length many of his plays and makes insightful connections among them. In between, she pries into his three marriages, as well as his longtime affair with actress Felicity Kendal, his decade-long muse and onstage leading lady.

Although Rosencrantz and Guildenstern seems like child’s play next to later challenging works like Travesties, Hapgood and Arcadia, he met with confused and flummoxed audience members from the very beginning of his career. To those puzzled by R & G who would ask him what it is about, he had a ready answer: “It’s about to make me very rich.” And indeed, it is fortunate that he was right, for he came to have rich tastes — in houses, clothing and travel.

In contrast to, say, Harold Pinter, a friend of Stoppard’s and fellow cricket enthusiast, whose plays reflect the view that less is more, Stoppard’s work takes the opposite position — that more is more. And if it often seems that theatergoers should have read up on quantum mechanics, philosophy and European history before trying to keep up with his synthesis of all three, he seemed to be in a constant battle with directors and producers who were eager for him to dumb down his plays and let the audience catch up.

Many is the time that I have attended a new Stoppard play and wished my seat were equipped with a pause button, so I could consider and savor the ideas and bon mots pouring out over the footlights. But if one has to work at keeping up with a theatrical mind like his, you really wouldn’t want it any other way.

And so it is with Lee’s encyclopedic biography, written proof that more can be more.

Film: Playwright August Wilson began his chronicle of the African-American experience throughout the … END_OF_DOCUMENT_TOKEN_TO_BE_REPLACED

Film: Just in time with the opening of movie theaters in Palm Beach County comes the season’s most … END_OF_DOCUMENT_TOKEN_TO_BE_REPLACED

Music: The very last concert Franz Joseph Haydn attended in his life was in March 1808, about a year … END_OF_DOCUMENT_TOKEN_TO_BE_REPLACED