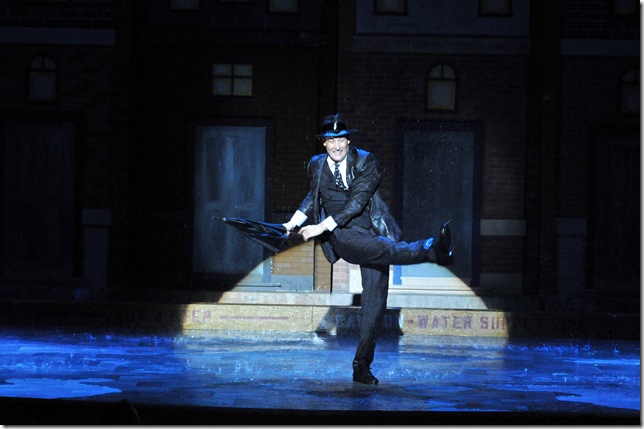 Traditionally, the first four rows of a theater are the most sought after seats, unless you are attending a show by The Flying Karamazov Brothers ― those comic jugglers of hazardous objects ― or the Maltz Jupiter Theatre’s production of Singin’ in the Rain.

For audience members at the Maltz seated close to the stage will be issued waterproof ponchos to protect them during the iconic title sequence, when early-days-of-talkies movie actor Don Lockwood warbles about his love for singing discovery Kathy Selden during a downpour.

And yes, as the ads have promised ever since the live adaptation of the beloved movie musical first opened on Broadway in 1985, “it really rains onstage.”

“When it rains, it really rains,” says Marc Robin, director-choreographer of the Maltz version, which was assembled at Lancaster, Pa.’s Fulton Theater, where he is artistic director. “It’s the entire grid that’s raining and Curt (Dale Clark, who plays Lockwood) has the entire stage to dance on, versus the sort of 10-by-10 platform, which is what I’ve seen done traditionally.

“The rain is actually over the entire stage. It’s sort of coming from everywhere. There’s a front curb that is actually seeping water onto the apron while he is dancing upstage. So that by the end of the act, when he goes crazy in the rain, the first four or five rows is going to need the ponchos we are giving them.”

As proud as Robin is of the watery havoc that he and the tech staff are creating, he wants to emphasize that the show is not about that rainstorm.

“Oh, gosh, not at all,” he says emphatically. Still, that is what people always want to know about. “It’s sort of like when you do ‘Phantom (of the Opera).’ The first question you get asked is, ‘How are you going to do the chandelier?’ Or ‘Miss Saigon,’ it’s ‘What are you doing for the helicopter?’ And that makes me crazy, because we’re not putting on this show to do a rain effect. We’re putting it on to change an audience’s mood or to make them invest in the story.

“For us the emphasis was really on old-world romance and Hollywood big-style,” says Robin. “I quoted ‘The Artist’ (the more recent Oscar-winning movie about the end of the silent film era) constantly because I thought that movie was brilliant and it was exactly what I wanted Don and Kathy’s story to be.”

Singin’ in the Rain was an early example of Broadway’s current fixation with using popular movies as the source material for musicals. There are a few changes made to the story in its transfer to the stage, but Robin takes things further with his directorial concept for this production.

“The play is written to go to a million different locations, from outside riding on a bus to being in a car, then obviously the rain itself which is outside on the street,” he notes. “I’m putting the entire play inside Monumental Studios, so every location is actually part of a movie backdrop or a movie setting. Even the rain. And that gives us the ability to move seamlessly,” from scene to scene.

“I don’t believe you can ever recreate a film (on stage),” adds Robin. “So I feel it’s my job to just create a good story and make sure that the key elements that people expect from the film are there. Yes, they jump over a couch, yes, it rains, he stands on a lamppost.” But, he says, do not look for clones of the movie’s stars, Gene Kelly, Debbie Reynolds and Donald O’Connor. “My Don, Kathy and Cosmo are not carbon copies of the movie.”

Robin is not ready to claim that the stage show is better than the original film. “No, absolutely not. I think some things are definitive and ‘Singin’ in the Rain’ is one of them.” But he will argue for the deeper emotional impact of theater over movies.

“I think the fact that it’s live people in front of you automatically heightens it,” he said. “In this version and the way that we’re doing it, we’re trying to be closer to the actual heart of the film. I think this production does a better job of actually translating what people loved about the film.”

Film: Playwright August Wilson began his chronicle of the African-American experience throughout the … END_OF_DOCUMENT_TOKEN_TO_BE_REPLACED

Film: Just in time with the opening of movie theaters in Palm Beach County comes the season’s most … END_OF_DOCUMENT_TOKEN_TO_BE_REPLACED

Music: The very last concert Franz Joseph Haydn attended in his life was in March 1808, about a year … END_OF_DOCUMENT_TOKEN_TO_BE_REPLACED