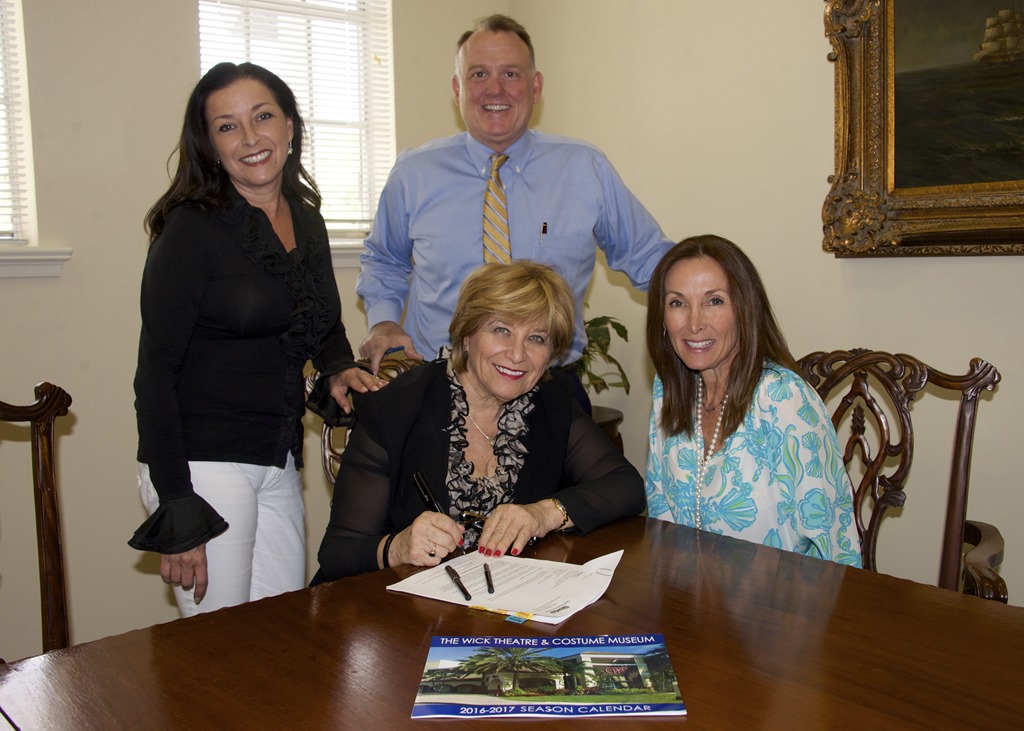 BOCA RATON – Three springtimes ago, Marilynn Wick rescued the closed and bankrupt Caldwell Theatre from the auction block and turned it into a combination costume museum, restaurant and performance center.

Wick’s main business, Costume World, acquired the property in March 2013 with an option to buy, a decision based on a belief — and a vow — to breathe new life into the once-popular theatrical venue that had suffered financial ruin, the result, she said, of a poor selection of shows and unbridled spending.

“The bank gave us 46 months to prove we could buy it and make it a success,” said Wick, a veteran entrepreneur.

On Thursday, she put her moniker on a $5 million SBA loan document and officially took possession of the structure at 7901 N. Federal Highway. The mortgage holder is Newtek Small Finance LLC of New York and the borrower is Costume World.

“Now, we will own it, and will move forward,” said Wick, a determined businesswoman who created a major theater-gear rental firm with more than a million pieces, many from Broadway.

With the paperwork out of the way, Wick is launching a number of projects, including a $5 million fundraising campaign, construction of an orchestra pit she hopes will allow her to replace canned music with live performers, creation of a children’s theater by the summer of 2017 and a program to nearly double her subscriber base from 2,800 to about 5,000.

Using pre-recorded music has never been a popular option, particularly among critics. Wick said that next year, three of the five shows will have live music. Eventually, real musicians should be the standard.

The Wick Theatre held its first official fundraiser several weeks ago. “We raised $85,000, which was pretty good,” she said.

Marilynn Wick was a single mom who had worked in several trades when she came to Florida from Pennsylvania in the early 1970s. She was running an industrial window cleaning service when she decided to teach her two pre-teen daughters how to sew. They created a Santa Claus outfit, and when mom offered it for holiday rental, the response was overwhelming. She followed that by acquiring thousands of costumes and, in time, both her rental and costume museum businesses soared.

In 2013, Wick was looking for a new location for her costume museum. “I could not get a permit allowing people to assemble at the old location.” Daughter Kelly, who was in real estate, brought her mother’s attention to the Caldwell, a building that was just five years old when foreclosure struck in 2012.

Wick figured she could move the costume business there, but she wasn’t in the market to produce stage shows. “I approached Legacy Bank [the mortgage holder] and, at first, they were not all that excited. Then, they took a second look. The bank was very upset about having to close the theater. The community had raised $4.6 million [to help build the theater] and they got nothing.”

An entrepreneur for four decades, Wick did some due diligence. She spoke to former Caldwell fans who said they’d become disinterested in the shows being offered there and stopped attending. “I love musical theater, and I have met many directors and producers over the years,” she said.

She chose to offer musicals as regular fare at Wick, opening in September 2013 with a critically acclaimed version of Sound of Music. This season, Wick has varied her offerings, presenting a Dancing with the Stars-American Idol combo and appearances by the Lennon Sisters at the holidays. She will bring Broadway actress Andrea McArdle to Boca for next fall’s They’re Playing Our Song.

Also, on Sept. 22, Wick plans to switch out the costumes currently on display and create an exhibit called “Where Runway Meets Broadway,” something she calls “a fashion show you won’t believe.”

While main stage productions will pretty much be on hold for the summer, the Wick plans two nights of opera and dinner and murder mystery dinners, both in the Tavern on the Wick restaurant. Chef William Walden will also be teaching a Saturday cooking class.

“I could never have made it without my daughter Kim,” said Wick. Kimberly Wick is not only the museum curator, but mom’s right-hand person in the theatrical trade. The younger Wick also starred as the decidedly untalented singer who gets killed off early in the recent comic whodunit, Curtains.

Wick is also grateful to the community for its continuing support. Henrietta, Countess de Hoernle, a Boca contributor who gave $1 million for construction of the Caldwell building and the right to name it for her late husband, Count Adolph de Hoernle, donated $250,000 specifically for the Wick. The lobby was named for the countess to honor her contribution.

Marleen Forkas, another noted Boca Raton philanthropist who just donated $50,000 to the Wick, said she did so “because I happen to like this theater and I was a supporter of the Caldwell. We need a theater in Boca Raton so we do not have to go to Palm Beach or Broward.”

“I am a season subscriber,” she added. “She operates a wonderful theater.”

Another local charitable contributor, Elaine Wold, also gave $50,000 to the Wick. She was the main contributor to Lynn University for its performance center named in honor of Wold and her late husband, Keith. The center was the site of the third presidential debate between Barack Obama and Mitt Romney in 2012.

Film: Playwright August Wilson began his chronicle of the African-American experience throughout the … END_OF_DOCUMENT_TOKEN_TO_BE_REPLACED

Film: Just in time with the opening of movie theaters in Palm Beach County comes the season’s most … END_OF_DOCUMENT_TOKEN_TO_BE_REPLACED

Music: The very last concert Franz Joseph Haydn attended in his life was in March 1808, about a year … END_OF_DOCUMENT_TOKEN_TO_BE_REPLACED