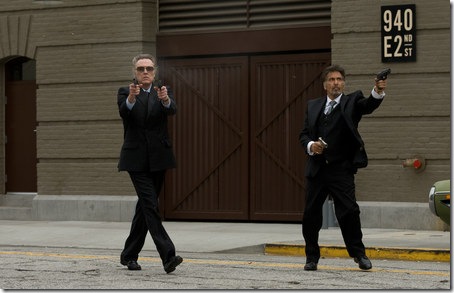 Remember the good old days when it seemed like every comedy and action movie pandered to teenage boys with disposable incomes? Back in the first decade of the Aughts, when Stallone and van Damme were languishing in direct-to-video purgatory and Arnold Schwarzenegger was governing, we saw the rise of millennial cash cows like Jason Statham, Robert Pattinson and Channing Tatum.

But then young people started to bypass theaters to watch movies on their iPads, and in cinemas today, everything old is new again. The leathery box office magnets of yesteryear are back, eschewing shuffleboard and Social Security for killing terrorists and cracking wise: Live Free or Die Hard begat The Expendables, which begat Red, which begat The Expendables 2, which later this year is begetting Red 2 and A Good Day to Die Hard, in a Mobius strip of “I’m getting too old for this” jokes. That brilliant old skit from The Ben Stiller Show, with Stiller’s Bruce Willis lumbering through the production of Die Hard 12, is starting to feel less like comedy and more like prophecy.

Most of these flicks have been money-makers, and so it continues: Ah-nold is back in theaters now with a big-ass firearm in The Last Stand, and Walter Hill (Walter Hill!) is just this weekend releasing a movie with Sly Stallone, who looks more inked than Shakespeare’s quill. Both of these stars will team up in September for the prison-break picture The Tomb, showing young guns like 50 Cent how it’s done.

Stand Up Guys, which opens Friday across South Florida following a recent, inexplicable Golden Globe nomination, is what fashionistas would call “on trend.” Keeping with the fogey-film explosion, it’s unlikely this tepid, proudly middling feature would have been greenlit a decade ago, though fans of the aforementioned movies may find it pleasantly diverting.

Shot and scored like a slick and anonymous USA cable series, Stand Up Guys is a septuagenarian riff on one of those “let’s get the gang together for one last job” films, with the gang primarily consisting of con man Christopher Walken, delivering one of his lackadaisical, perpetually nonplussed performances bordering on rigor mortis, and Al Pacino, as his former partner, newly released from prison.

After a bit of Grumpy Old Men bickering, they’ll liberate Alan Arkin — who sleepwalks through his Arkinesque performance, all quippy and crotchety — from nursing-home torpor. The whole time, we know, and Pacino’s Val will come to know, that Walken’s Doc has been ordered to kill Val by a revenge-seeking gangster, a fact that is intended to generate suspense and poignancy during these old dogs’ final night together.

Instead, discerning viewers will find themselves shaking their heads at the lowbrow turns in Noah Haidle’s smug screenplay. They’ll be subjected to detours in 10-years-dated erection-pill jokes — “Mount Everest just moved into my pants!” exclaims a Viagral Pacino, as a tacky zoom closes in on his boner face — and the perfunctory business of rescuing a kidnapped woman from the trunk of a gangster’s car the stand-up guys have stolen.

Like everyone else in this picture, the bruised, raped and left-for-dead woman in the trunk is ever-quick with a “witty” barb. The laughs in this movie are easy, artificial and ultimately demeaning, with its depiction of women as nothing but whores, nurses, waitresses and victims, making one long for the comparative progressivism of the dames and housewives in Gangster Squad. The second half of this movie is slightly better than the first, but by then, like a hip that’s been replaced too many times, it’s pretty well beyond repair.

Film: Just in time with the opening of movie theaters in Palm Beach County comes the season’s most … END_OF_DOCUMENT_TOKEN_TO_BE_REPLACED

Music: The very last concert Franz Joseph Haydn attended in his life was in March 1808, about a year … END_OF_DOCUMENT_TOKEN_TO_BE_REPLACED