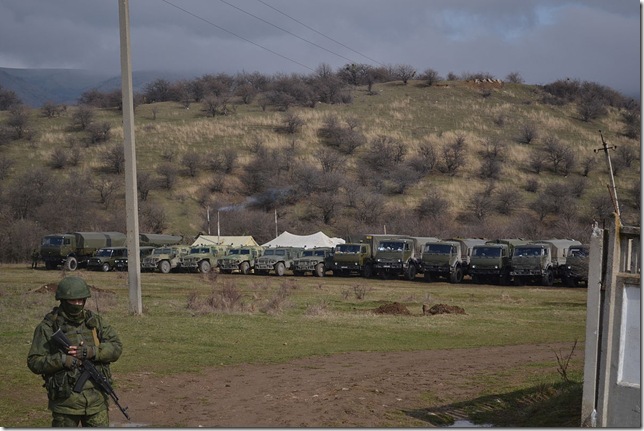 Ukraine and basketball were the stories dominating the mainstream media this week, elbowing aside the tragedies of the sinking ferry in South Korea (“This is the end of me” was the heart-rending headline in the New York Times); the so-far failed search for the lost Malaysian airplane and apparent callousness of expelling the grieving families of those lost passengers; the flood of mud that buried a good part of a mountain village in Afghanistan; the abduction of Nigerian schoolgirls.

These two stories have given the chattering class something to chomp on. Pundits of every stripe have rushed to read the storm warnings like 21st-century meteorologists trying to unwind the twisters raging in the minds of each of the main players: Vladimir Putin and Donald Sterling.

Both are related because each exposes the blurred border between appearance and presence, between the seen and the unseen.

It’s 1968 in the Ukraine. The current conflict in that country is generational. The grandparents of one part of the country having chosen to align with the wrong side in the last war, finds its children and grandchildren struggling to choose what they now perceive to be the right side. The offspring of the generation of the other part of the country, which thought it had chosen the right side, is finding itself on the wrong side this time around.

The fault line has been exposed by a Russian leader who seems to have one foot in the past and one in the present.

That kind of borderline personality problem might also characterize the mind of the aging L.A. Clippers owner who seems to have one foot in a plantation owner’s droit du seigneur which makes him think it’s just fine and dandy to be contemptuous of his players and their fans while squiring a trophy biracial girlfriend à la Thomas Jefferson in a world of permissive surveillance.

Sterling may have earned himself a spot in the Richard Nixon Hall of Tape Shame.

But, it does no good to demonize either man.

To proclaim Vladimir Putin a bully and a thug is hardly a way to engender effective communication. To call Sterling a racist may temporarily soothe the self-righteous moralizers among us, but it doesn’t change his attitude or those who share it, although I do think there’s something ironic in the possibility of Oprah buying the Clippers. Maybe Martha Stewart could balance things out by picking up the newly Zenalized Knicks. That would make a playoff fit for modern times.

Thing is, what are the corrective tools we are using to fix up both situations?

And these are considered the best of our current strategies of conflict resolution. What’s the difference between these approaches and the old-fashioned method of “gunboat diplomacy”?

Isn’t there some other way to think about these problems?

Film: Playwright August Wilson began his chronicle of the African-American experience throughout the … END_OF_DOCUMENT_TOKEN_TO_BE_REPLACED

Film: Just in time with the opening of movie theaters in Palm Beach County comes the season’s most … END_OF_DOCUMENT_TOKEN_TO_BE_REPLACED

Music: The very last concert Franz Joseph Haydn attended in his life was in March 1808, about a year … END_OF_DOCUMENT_TOKEN_TO_BE_REPLACED