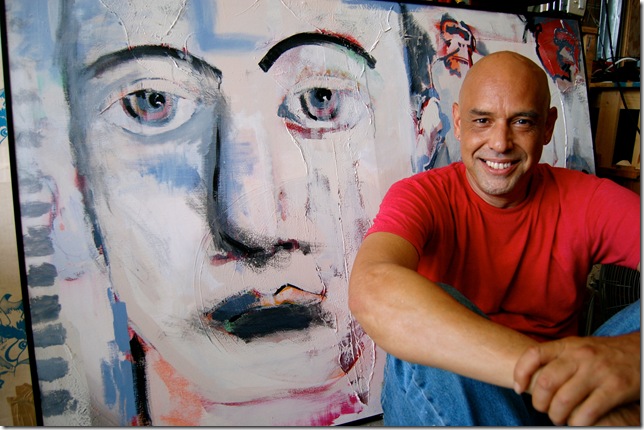 Auto shops and heavy machinery might not be the first thing you think of as a backdrop for artwork.

But the artists of the Boynton Beach Arts District have turned Industrial Avenue into just that.

The arts district lies inconspicuously off Boynton Beach Boulevard at 422 Industrial Ave. The district houses a series of warehouses that function as galleries, studios, and canvases for artists in the community.

Once run-down and dirty, the area has undergone a complete makeover and cleanup over the past 20 years. The avenue has been transformed from a junkyard into a colorful center of culture.

Richard Beau Lieu, a trained sculptor and fine art appraiser, first petitioned to have the area designated as an arts district. His gallery, Neighborhood Gallery, has been in the area since 1986 and represents around 30 international artists. 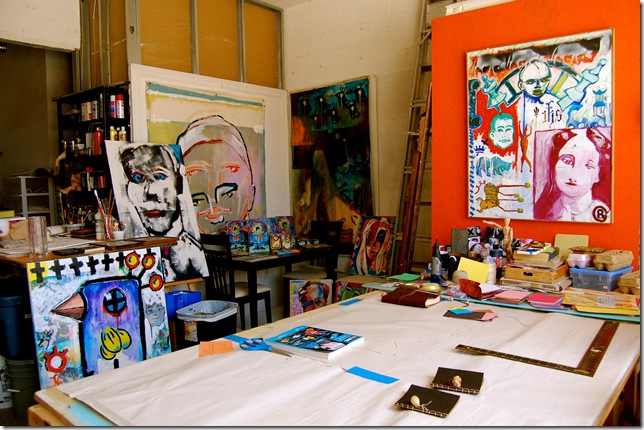 The district’s development began with a simple need for a sign pointing to the gallery down the street and, after talking with the city, the area was designated as an arts district in 1989.

At the time it was a “real rough area,” says Beau Lieu. People dumped old appliances and junk, and the street would flood with every rainfall.

Beau Lieu says the change, especially in the past year, has been tremendous. Much of that progress is credited to Rolando Chang Barrero of ActivistArtistA, a studio/gallery in the district, who has brought in many new artists.

It’s largely been a community effort, says Barrero, who moved to the area in June 2011 from South Beach. He is a graduate of the School of the Art Institute of Chicago, where he studied experimental media.

ActivistArtistA celebrates its one-year anniversary Oct. 7, growing from an original $600 investment and small garage to a powerful part of the Boynton art community. Barrero represents about 12 artists as well as himself, putting together shows, facilitating opportunities for artists around the county, and organizing community projects.

Earlier this month, the gallery was showing Symbolism: Pushing Boundaries. The exhibition hosted five artists who offered “a solution to traditional symbolism in a nontraditional manner,” says Barrero. 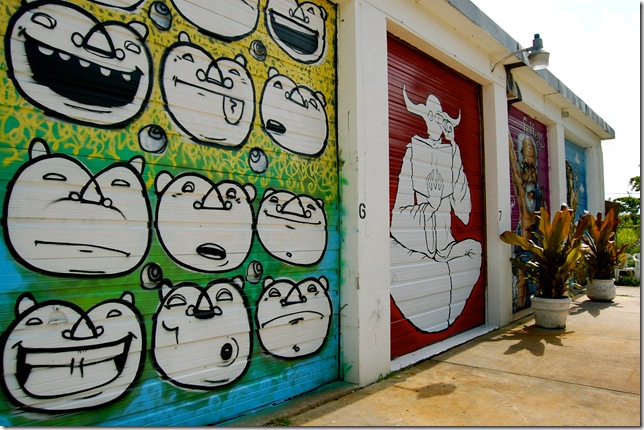 Barrero also created The Bay Gates Project. The project offers graffiti and street artists the walls of the district, as well as other walls throughout the county, as legal spaces for their art outdoors. “The artist is not seen as a criminal,” says Barrero, and the street art is the “expression of a community for a community.”

Debby Coles-Dobay, public arts administrator for Boynton Beach, helped the artists bypass a complicated process so that the area could be open to artists without administrative problems.

“I saw that it wasn’t going to be that easy to do a permit for each mural. So, what we basically did is we took it to the Arts Commission and said, ‘Look, this is a place where we want art to be spontaneous … where we want it to happen quite often.’ So we want to allow it in a district that we already designated as an arts district,” said Coles-Dobay.

Coles-Dobay says that art in the city is “good basic planning.” It gives a city identity, educates the public, and is beneficial economically, she says. 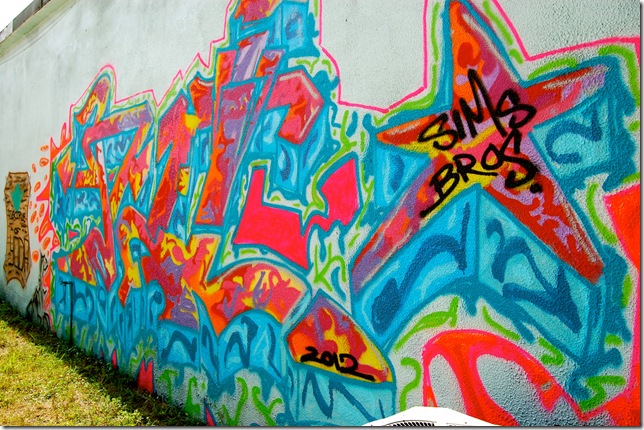 Boynton Beach is, after all, the third-largest city in Palm Beach County and provides countless opportunities for art.

“I think today’s global economy depends on creative thinkers, and the arts help to stimulate that part of the brain,” says Coles-Dobay. “That helps us thinking up a new technology, think differently in our everyday jobs, or to uplift in a downturn economy.”

Barrero said there’s plenty of good art to be had in Boynton Beach.

Barrero sees ActivistArtistA as providing beautification of the city and an artistic dialogue with the community.

“For too long, art (has been) used as a backdrop,” says Barrero, but there is no “follow-through about the development of the exhibition.” He attributes that to the absence of arts staff writers in any major press of South Florida.

“It has created the need for a gallery like myself to create the dialogue and to take it to public libraries and public forums to be discussed, because you can’t read about it,” says Barrero.

Art and conversation about art stimulates people to think differently and educates the public, says Coles-Dobay, and gives members of Boynton Beach a sense of civic pride.

To spread the word about exhibitions and events in the Boynton Beach Arts District, Barrero relies on press releases and social media sites such as Facebook and Twitter. 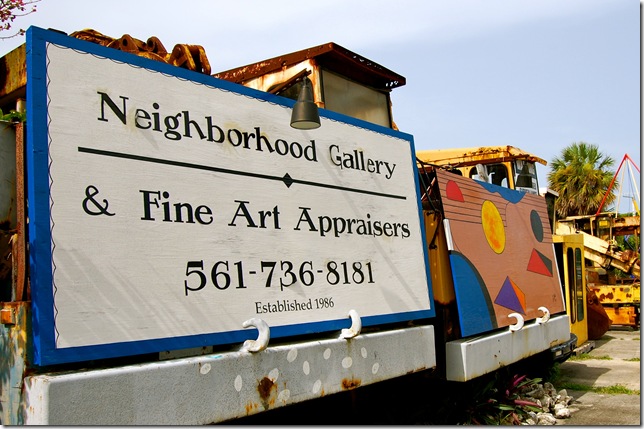 “I’m notorious,” he says of the relentless way he uses Facebook sites. Barrero, along with helping his fellow artists put their sites together, makes a Facebook page for not only the studio but also every project it organizes. Through Facebook, Barrero is able to advertise classes taught at the studio and events such as the monthly Boynton Beach Art Walk.

Both Beau Lieu and Barrero see a bright and growing future for the Boynton Beach Arts District and for the artists who contribute to its galleries. The affordability of studios in the district was a main reason for both of the artists’ move to the area. The reasonable prices are also appealing to newer artists on the scene.

“It’s a big risk to bring in an emerging artist … someone who is trying to break the mold,” says Barrero. He often pairs emerging artists with established ones in exhibitions.

“We’re dedicated to enriching and creating a more vibrant environment for artists to come in to Boynton Beach,” Coles-Dobay said.

Chloe Elder, a graduate of the Dreyfoos School of the Arts, is a student at the American University of Paris. 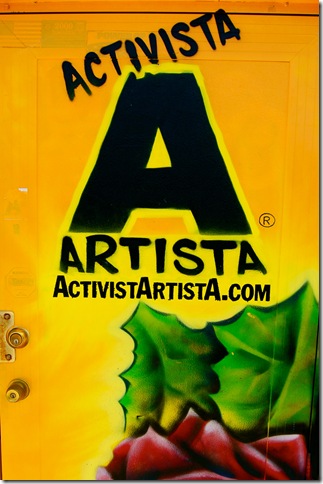 On Thursday, ActivistArtistA hosts a solo show by Renda Writer, a poet whose artwork consists of thoughts written in blue ink on yellow paper, gathered beginning in 2000 when his job was to sell comedy club tickets to people on the streets of New York. His work also features poems presented in collaboration with other artists; the opening will include DJ Stevie D, and Writer is also debuting his new lines of bottled water and jewelry. Admission is free.

Film: Playwright August Wilson began his chronicle of the African-American experience throughout the … END_OF_DOCUMENT_TOKEN_TO_BE_REPLACED

Film: Just in time with the opening of movie theaters in Palm Beach County comes the season’s most … END_OF_DOCUMENT_TOKEN_TO_BE_REPLACED

Music: The very last concert Franz Joseph Haydn attended in his life was in March 1808, about a year … END_OF_DOCUMENT_TOKEN_TO_BE_REPLACED