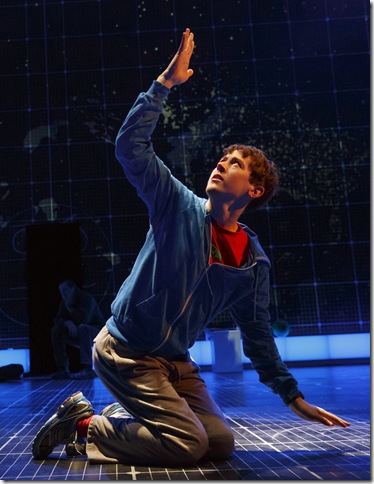 In the same way that the children’s book War Horse could never be harnessed onstage, Mark Haddon’s 2003 novel, The Curious Incident of the Dog in the Night-Time — the story of an autistic boy’s struggles and eventual triumph over the challenges of everyday life — would seem an unlikely choice for theatrical adaptation. The two plays are not haphazardly compared, for both were directed by the wildly imaginative Marianne Elliott, and the two works are the most imaginative and captivating stage productions on the past decade.

The Curious Incident — yes, the title is borrowed from the cases of Sherlock Holmes — is the tale of 15-year-old British lad named Christopher Boone, a genius at math but so emotionally stunted that he cannot abide loud noises or being touched. When he finds a murdered dog in a neighbor’s yard, he resolves to sleuth out the killer, despite his father’s admonition to not meddle in the affairs of others. Stubbornly single-minded, Christopher also learns that his dad lied to him about his mother’s demise and he sets off by train from the suburbs into London, determined to find her.

With a major assist from scenic designer Bunny Christie and video by Finn Ross, director Elliott takes the audience inside Christopher’s jumbled mind, as well as through the railway system and — most harrowing — onto the train tracks when Christopher’s pet rat gets loose. On a technical level, the production is dazzling, but it also rests on the very human shoulders of a remarkable young actor, recent Juilliard graduate Alex Sharp, with whom it is impossible not to empathize.

The action, as well as the design elements, are literally choreographed, as the play sweeps the audience along at breakneck speed. And do take Christopher’s offer to explain the mathematical proof on his college-qualifying test following the show’s curtain calls. In addition to its many theatrical miracles, The Curious Incident of the Dog in the Night-Time even manages to make geometry exciting. (Grade: A+) 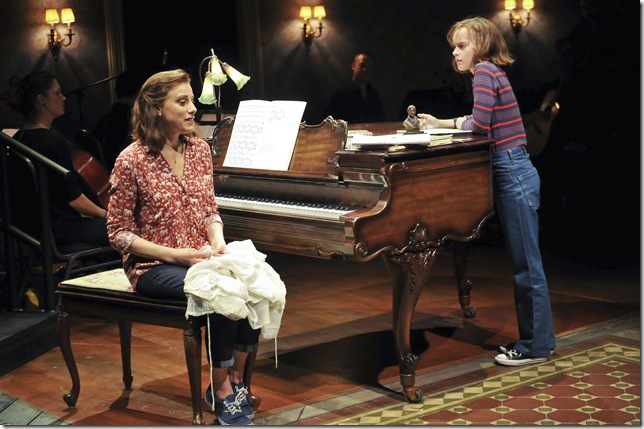 Despite its title, Fun Home is not the most amusing new musical on Broadway this season, but it is the most touching, emotionally involving and — while it might not win the top Tony Award — the best of the current crop. You see, as fans of Alison Bechdel’s graphic novel and personal memoir know, the title is a wry nickname for the funeral home that Bechdel grew up in, in the shadow of her troubled father, a schoolteacher and part-time mortician with yet another secret life.

So Fun Home is hardly a typical musical, but surely by now audiences are open to unconventional subjects merged with songs as long as they are handled with sensitivity and artful stagecraft. That is precisely what Bechdel’s story gets from composer Jeanine Tesori (Violet, Caroline or Change) and book writer/lyricist Lisa Kron (Well, 2.5 Minute Ride). For starters, they divide the central role among three actresses — a pre-teen tomboy (Sydney Lucas), an inquisitive young woman of  college age grappling with her sexual orientation (Emily Skeggs) and a contemporary Alison of 43 (Beth Malone), looking back on the dramatic events of her still-young life.

For as Skeggs as Middle Alison exuberantly declares in a number called “Changing My Major,” she is inalterably a lesbian and wants nothing more than to study Joan, her first lover. In retrospect, the grown Alison must come to grips with her demanding father who she learns was gay and cheated on her mother with various men. As her father Bruce, a brooding Michael Cerveris dominates the production whenever he is onstage, but it is Judy Kuhn as his wife Helen who will break your heart with “Days of Days,” her bitter solo on what it is like to be with a man whose life is built on dishonesty.

Director Sam Gold pulls together the disparate elements of Fun Home with assurance, even on the problematic, lozenge-shaped stage of Circle in the Square. As if a label could suffice, you could call Fun Home a coming-of-age story, and a particularly timely one, as the country continues to evolve on matters of gay rights and acceptance. As musicals so, it is darker than most, but as Alison takes control of her life, the show is also flecked with sunlight. (Grade: A) 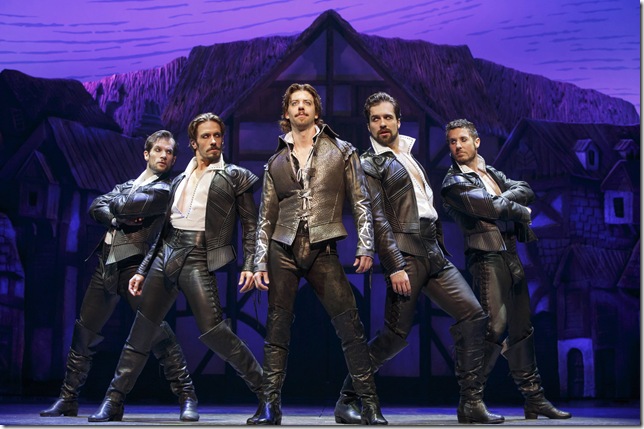 If instead, you would prefer a musical comedy that is genuinely funny, that is provided — and is likely to be around for years to come on Broadway and on the road — by newcomers Karey and Wayne Kirkpatrick, a brother team whose Something Rotten! has broad fun positing a pair of playwriting siblings in Elizabethan times.

Understandably, they are being overshadowed by Will Shakespeare (Christian Borle, playing the Bard-cum-rock star). So Nick Bottom (Brian D’Arcy James) enlists the services of a soothsayer (Brad Oscar of The Producers) to foretell what the next big thing, theatrically speaking, will be.

He learns that it is something called a “musical,” so — improbable as it sounds — their fortune lies in inserting songs into their plays. This news prompts an avalanche of musical jokes and snippets of tunes from the future for the amusement of theatergoers with even a slight familiarity of the genre. Something Rotten! also asks for a rudimentary awareness of the plays of Shakespeare, for Nick’s brother Nigel (John Cariani) is the true poet in the family, and Will S. eagerly steals some of his more lyrical ideas. Eventually, the Bottoms bet all their resources on a musical about what the soothsayer insists will be Shakespeare’s biggest hit. But he gets the sooth slightly wrong, so they write a show called Omelette!

OK, you’ve got the collegiate level of Something Rotten’s! humor, a cut or two above Monty Python’s Spamalot and it sustains itself far longer than that Arthurian spoof did. That is due largely to the Kirkpatrick’s tongue-in-cheek score which yields two genuine showstoppers, “A Musical” and “Make an Omelette,: plus an opening number for each act called “Welcome to the Renaissance,” which is a guaranteed earworm.

Direction and choreography are in the capable, cunning hands of Casey Nicholaw (Spamalot, Book of Mormon). He draws giddy performances from all of his principals, most notably Oscar and Borle, with mirthful support from Gerry Vichi as the token Jew named, yup, Shylock and Brooks Ashmanskas as a Puritanical scold. The men are dealt the best material, but Heidi Blickenstaff gets her share as Nick’s cross-dressing wife Bea and Kate Reinders — a Kristin Chenoweth clone — is plenty winsome as Nigel’s love interest. There have been plenty of self-reverential shows that make fun of the embraced-and-reviled genre called the musical, but Something Rotten! does so with an Elizabethan flair. (Grade: B+) 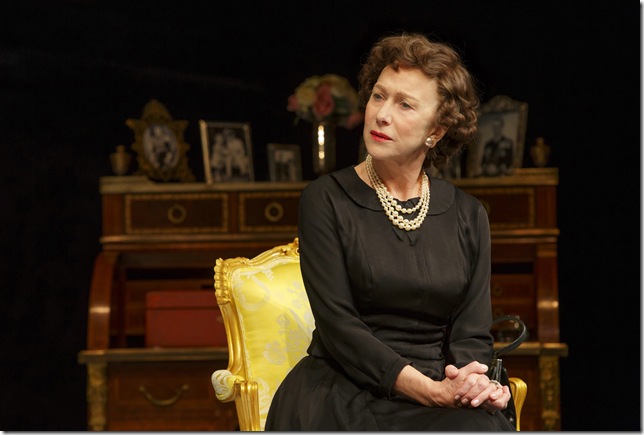 Dame Helen Mirren knows the role of a lifetime when she comes upon it. And though she already won an Oscar playing Elizabeth II in The Queen, she is savvy enough to jump back into that regal persona in a stage vehicle called simply The Audience. Both the film and the play were written by Peter Morgan and while both scripts have their merits, they are undeniably elevated by the participation of Dame Helen.

The Audience is something of a stunt showcase for the actress, since she is seen at various points throughout Elizabeth’s 60-plus-year reign and rarely in chronological order. So Mirren changes ages, stances, demeanors and costumes from scene to scene, often in the blink of an eye under Stephen Daldry’s otherwise invisible direction. Much of the play is rather insularly British, so one’s enjoyment of its nuances depend in large part on one’s familiarity with and interest in the Mother Country’s political history. Mirren’s performance skill, on the other hand, is universal in its appeal.

The play’s title refers to the queen’s standing weekly, off-the-record one-on-one meeting with her prime minister, of whom she has had 12 over the course of her reign. Ostensibly, the audience is meant for the prime minister to fill the queen in on governmental events, but since no notes are taken and both parties keep their meetings secret, playwright Morgan has considerable license to imagine the conversation he depicts.

The queen’s first audience is with Winston Churchill (played with unnerving authenticity by Dakin Matthews), who takes it upon himself to educate the young, inexperienced monarch. For most of the later prime ministers, they face a taciturn, imperious monarch whose weakness for an occasional bit of whimsy makes them all the more uncomfortable.

The stage time for the prime ministers is hardly evenhanded. The current head of state, David Cameron (Rufus Wright) comes and goes quickly, though not quite quick enough for the queen, who nods off during his dry discourse. Anthony Eden (Michael Elwyn) is best remembered for being mired in the Suez Crisis, and that is exactly what is recapped during his audience. Four prime ministers, including Edward Heath and Harold Macmillan, never show up at all onstage, which speaks volumes for Morgan’s opinion of them.

If there is a disappointment among the lot, it is surely Judith Ivey’s Margaret Thatcher, the showdown we long wait for, but the revered actress cannot manage to get beyond our vivid memories of the Iron Lady (and perhaps our memories of Meryl Streep’s cinematic rendering), offering a mere caricature instead. And unexpectedly, Richard McCabe is a real standout as working-class PM Harold Wilson who grew into the queen’s personal favorite, a very touching portrayal.

Ultimately, though, the evening belongs to Mirren, who overshadows the play. Hers is a major performance inside of a script that feels like a less than fully nourishing meal. (Grade: B)

Music: The very last concert Franz Joseph Haydn attended in his life was in March 1808, about a year … END_OF_DOCUMENT_TOKEN_TO_BE_REPLACED

Film: Major League Baseball culminates each season with the World Series, but to find the true … END_OF_DOCUMENT_TOKEN_TO_BE_REPLACED