The sad and sorry lives of Times Square’s sordid population of hookers, drug- and crime-dealers during the 1980s are brought to the stage with excellent grittiness and striking realism in the musical/drama, The Life, now playing at the Delray Square Performing Arts Center.

It’s quite the occasion for Gary Waldman and Jamison Troutman of Florida Theater Productions Inc. They produced The Life in 2004 at the former Atlantis Playhouse, and the show hasn’t been seen in Florida since then. It originally opened on and off-Broadway in the late 1990s, and was summarily put upon by then-New York Mayor Rudy Giuliani for its depiction of the kind of nasty street life he was trying to clean up.

Music for The Life was composed by Cy Coleman, perhaps best known for providing the tunes for Sweet Charity, Barnum, City of Angels and The Will Rogers Follies. He collaborated with lyricist Ira Gasman and David Newman who, together, crafted intense and emotional songs that tap into New York’s sidewalk society where everything had a price — especially sex and drugs. Pimps rule, women toe the line — or else — and petty criminals thrive on illicit dollars.

The 2014 version doesn’t suffer the claustrophobic feel of the old Atlantis Theater, where the audience sat virtually at the actors’ feet. The old stage was also too long and narrow to do justice to the production. Those sins are expunged in the newer edition where discreet distance allows the audience to take in the whole frame without missing a word. Only one member of the original cast is back, Carl Barber-Steele, reprising his 2004 role as tough-talking, mean-fisted pimp extraordinaire Memphis.

Beginning and ending with the staccato tune, “Check It Out,” The Life homes in on a good-hearted hooker named Queen (Jasmine Maslanova-Brown), her cocaine-addicted boyfriend Fleetwood (Andre Russell), her friend and fellow street-walker Sonja (Kendra Williams), hustler JoJo (Elijah Word) and Memphis. Coarse language and sexual inferences add to the realism of the play.

Graffiti is spread along the front of the stage and along both walls. Because the theater is created from a former movie auditorium, characters enter and exit via the aisles. It intensifies the action because the players frequently surround the viewers. And it gives Memphis a chance to ramp up his evil as he walks slowly toward the stage.

Queen and Fleetwood are lovers, but his allegiance to his woman takes a fall when he hooks up with Mary (Chelsea Lee), an “innocent” just arrived from Duluth. The hookup shatters their hope of getting out (“We Had a Dream”). Meanwhile, the lament of the oppressed goes on, in songs such as “My Body,” with the women declaring that “my body is my business”; “My Way or the Highway” (Memphis’ warning to Queen as he brutalizes her); “Someday Is for Suckers” and “A Lovely Day to Be Out of Jail,” underscoring the hookers’ hopelessness. 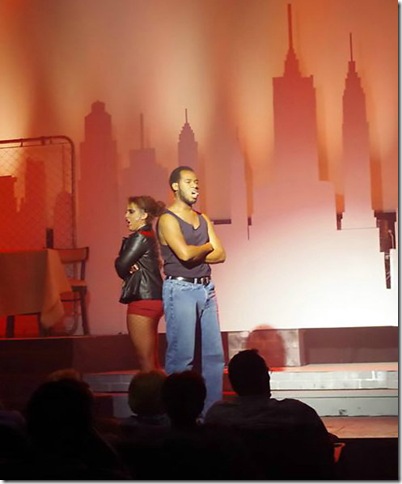 One tune has a tinge of humor — “Why Don’t They Leave Us Alone?” It serves the men as their complaint about cops hassling “us businessmen.” And women sing it to ask why the police bust “us working girls.” The refrain, “Use what you got, to get what you want,” shows up now and again as a reminder of what’s really going on.

Director Waldman (who played the homeless man in Sounds of Simon) directs the play, with Troutman as producer. They’ve put together a cast of wonderful singers, actors and dancers. Maslanova-Brown, at age 18, has outstanding depth and emotional feeling, not to mention an unstoppable voice. Ditto for Lee, also young, who brings moves to her role that most young women have yet to encounter.

As JoJo, Elijah Word is a perfect street hustler and an interesting foil to Russell’s Fleetwood. The latter aspires to JoJo’s position, but lacks the oomph to get there.

Williams’ character of Sonya rises up to help Queen in many ways. She’s a great singer with exceptional acting talent. Ditto for the other performers, Victoria Anderson, Brettnie Blake, Richard Forbes and choreographer-performer Ben Solmor. Alissa Kane, one of the dancers from Sounds of Simon, has matured a great deal in just a year and excels in her new stage endeavors.

Music: The very last concert Franz Joseph Haydn attended in his life was in March 1808, about a year … END_OF_DOCUMENT_TOKEN_TO_BE_REPLACED

Film: Major League Baseball culminates each season with the World Series, but to find the true … END_OF_DOCUMENT_TOKEN_TO_BE_REPLACED