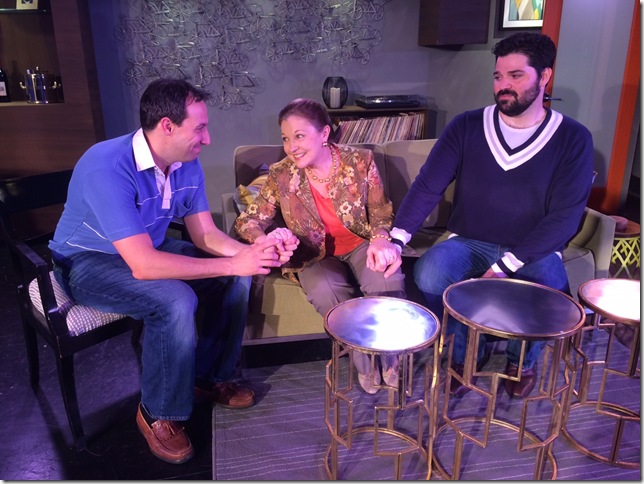 What South Florida’s theater community has long needed were playhouses where a hit show could transfer for an extended run. Now suddenly, just in time for the holiday season, we have two such gifts.

The Arts Garage has moved its sensual season opener, Sex with Strangers, to the new Palm Beaches Theatre, a/k/a the former Florida Stage and Plaza Theatre in Manalapan. And Fort Lauderdale’s Island City Stage continues its relationship with the Levis Jewish Community Center in Boca Raton with a remounting of Michael McKeever’s Daniel’s Husband, the odds-on favorite to win a Carbonell Award for the year’s best new work.

McKeever, the region’s most prolific and acclaimed playwright, has come up with one of his best scripts yet with this highly topical worst-case scenario of the consequences when a longtime gay couple opts out of getting married.

McKeever has never had difficulty being glib, but in recent years, he has pushed himself for something deeper and more dramatic. Daniel’s Husband has it both ways. It begins with an amusing, light opening scene of banter and parlor games between two gay couples at a dinner party. Hosting are successful architect Daniel Bixby (Alex Alvarez) and novelist Mitchell Howard (John Manzelli), who have been living comfortably and happily in a committed relationship for the past seven years. Their guests are Mitchell’s literary agent Barry (Larry Buzzeo) and his inappropriately younger boyfriend Trip (Chris Anthony Ferrer).

Daniel and Mitchell seem to be living the ideal life, until the subject of gay unions comes up and Mitchell goes into his oft-spouted explanation of why he is philosophically opposed to same-sex marriage, or any marriage for that matter. After all, Mitchell argues, they already took care of most of “the legal stuff,” so what could go wrong?

Soon afterwards, as if to answer his rhetorical question, Daniel — who longed to wed Mitchell — suddenly suffers a crippling stroke that leaves him a quadriplegic, unable to move, speak or otherwise communicate.

That is devastating enough, but without benefit of a marriage certificate or health care surrogate papers, their relationship cannot hold up in court. That they learn when Daniel’s overbearing, but previously supportive mother (Laura Turnbull) sues to regain custody of her grown son. What follows is a legal wrestling match, but thankfully McKeever keeps us out of the courtroom, focusing instead on the human consequences of the couple’s dilemma.

Already critically acclaimed from its world premiere earlier this year, Daniel’s Husband has been reassembled by director Andy Rogow with most of his original cast intact and a couple of more than worthy replacements.

Manzelli takes over the pivotal role of Mitchell from Antonio Amadeo (currently appearing at GableStage, see below), an emotional role that bounces back and forth from distress to anger. He seethes in his nose-to-nose confrontations with Turnbull and, while McKeever tries not to turn herinto a villain and the actress adds some dimension to her, she remains unsympathetic throughout.

For much of the play, Alvarez is immobile and expressionless, but early on he displays a warmth and vibrancy that makes his later situation all the more heartbreaking. Buzzeo returns to lend solid support and Ferrer, the other new cast member, strikes the right notes of naivete and empathy.

Proving the old adage incorrect, opportunity has now knocked twice with a new chance to see Daniel’s Husband, for the first time or a return visit. Either way, it is not to be missed. 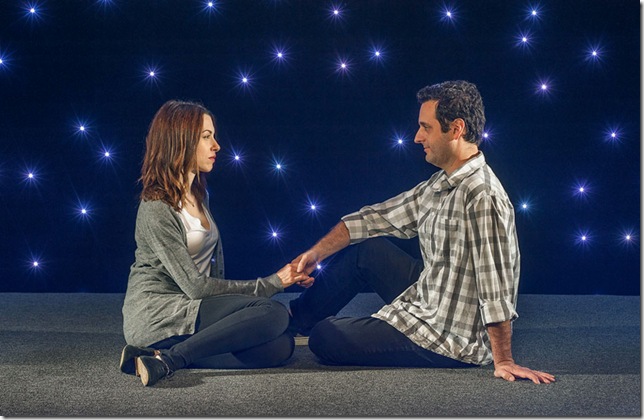 Multiverse is the notion that an infinite number of variations on our life decisions, major and minor, can co-exist together. It is the stuff of science fiction, often applied to momentous events and their subtle variations which have profound consequences.

But, asks British playwright Nick Payne in his two-character drama Constellations, what if that concept of many variations existing side-by-side into eternity were applied to a developing relationship between two ordinary souls?

At GableStage, the answer turns out to be an interesting acting exercise for real-life husband-and-wife team of Antonio and Katherine Amadeo, though the experience is pretty thin on cumulative dramatic impact.

He plays a beekeeper named Roland and she is Marianne, a theoretical cosmology physicist. They meet cute — in the parlance of romantic comedies — as she approaches him with the burning question, “Do you know why it’s impossible to lick the tips of your elbows?” We never get the answer, but we do get several repetitions of the question — Marianne asking it in a variety of inflections and emphases, then Roland asking the question, and on and on.

So it goes for a brief 65 intermissionless minutes, broken into brief snippets of scenes, which keep starting over on a live tape loop, just as we begin to become immersed in the characters and their quest for human connection. It is as if Payne were saying, “Don’t bother getting involved with these people, because at any moment I may press the reset button.”

What Constellations does have is interesting performance opportunities for its two actors, and the Amadeos certainly demonstrate the requisite versatility. He plays a type he has specialized in previously, the sensitive schlub, while she offers many shades of social awkwardness. While it should not matter that we know they have an offstage history together, their personal chemistry clearly comes in handy here. Still, even with their attempts at injecting the perception of depth into the script and director Joseph Adler’s efforts at varying the staging of their exchanges, the play refuses to add up to much.

The same goes for Lyle Baskin’s scenic design, a sparse series of levels and benches, along with a large bunch of balloons overhead. And just in case we did not get the point of Constellations’s faux-cosmic significance, Jeff Quinn illuminates it with a backdrop of starry pin lights.

With only two characters and a minimal set, Constellations is bound to be produced a great deal around the country. (Note to artistic directors: Look into doing Duncan Macmillan’s Lungs instead.) Granted that Adler and the Amadeos are giving the play a first-rate reading, but it is hard not to think of it as so much emperor’s new clothes.

Film: Playwright August Wilson began his chronicle of the African-American experience throughout the … END_OF_DOCUMENT_TOKEN_TO_BE_REPLACED

Film: Just in time with the opening of movie theaters in Palm Beach County comes the season’s most … END_OF_DOCUMENT_TOKEN_TO_BE_REPLACED

Music: The very last concert Franz Joseph Haydn attended in his life was in March 1808, about a year … END_OF_DOCUMENT_TOKEN_TO_BE_REPLACED