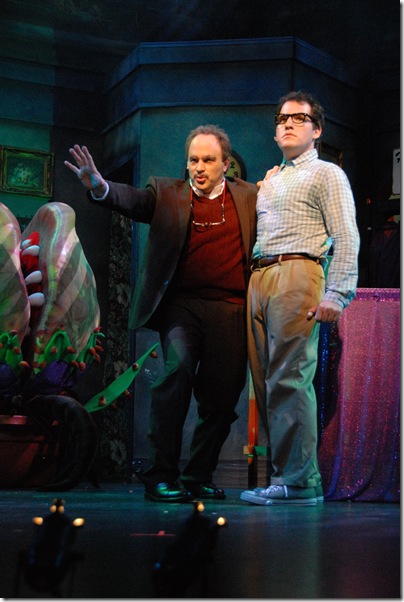 Whether it is a switch of missions or simply a pause, the Boca Raton troupe recently served up the Tony Award- and Pulitzer Prize-winning Rent and is now having fun with the very entertaining Little Shop of Horrors — the 1982 hit that remains the most commercially successful show in off-Broadway history.

Based on a satirical sci-fi flick from schlockmeister Roger Corman, the stage show comes from the team of Howard Ashman and Alan Menken,, who would go on to revitalize the Disney animation mill with The Little Mermaid and Beauty and the Beast. Little Shop, however, is too dark and twisted for the Mouse Factory, which explains its appeal.

The story revolves around a nebbish amateur botanist, Seymour Krelbourn (Mike Westrich), an underling at a failing Skid Row flower shop. His life turns around when he buys an exotic plant that attracts customers as well as the romantic attentions of co-worker Audrey (Amy Miller Brennan), a dumb blonde with low self-esteem. The catch is that the plant craves human blood and Seymour reluctantly agrees to supply it, a Faustian bargain with disastrous consequences.

Director-choreographer Patrick Fitzwater obviously has an affection and a reverence for this show, for he takes few liberties with it. Nor does he put his distinctive stamp on it. He does, however, cast it well with some of the area’s strongest musical performers and he dials back on the usual cartoonishness which typically imbues the characters.

Menken’s score has a familiar early ’60s rock ’n’ roll sound, led by a trio of doo-wopping, hand-jiving street urchins, and Ashman’s lyrics are loaded with period gags. Brennan has the show’s two best numbers (“Somewhere That’s Green” and “Suddenly Seymour”), belting out the latter with fervor. Even in nerd mode, Westrich handles gobs of fast lyrics and dances with tush-twitching glee.

Slow Burn fixture Matthew Korinko ages up credibly as shop owner Mushnick and Shane Tanner handles most of the other supporting roles well, particularly sadistic dentist Orin Scrivello. The various plant puppets based on the original designs are rented, which is a little disappointing, but at least Sean McClelland’s scenic design has some inventive touches, with homage to Vincent van Gogh, of all people. 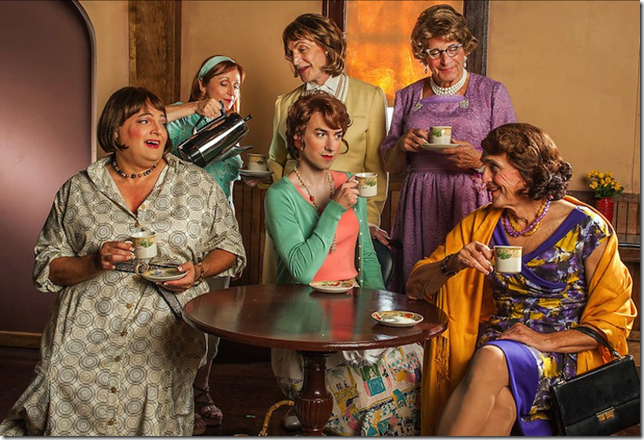 From his Broadway debut more than 30 years ago in his own epic play about a gay drag queen, Torch Song Trilogy, to his musical scripts for such mainstream shows as La Cage aux Folles and Kinky Boots, Harvey Fierstein has explored the theme of what it means to be a man. Continuing along those lines is his most recent drama, Casa Valentina, a fictional tale about a real-life Catskills refuge for men — circa 1962 — men who indulged their urges to dress as women.

Acclaimed but short-lived on Broadway a season ago, the play is catnip for GableStage’s Joe Adler, both for what it has to say and for the meaty roles it affords its sizable cast.

The action takes place at Chevalier d’Eon, a rundown, cash-strapped bungalow colony where straight men go to escape the disapproving eye of the outside world as they embrace their female side through cross-dressing. Some do it out of sexual impulse, some out of gender confusion, while others out of a simple preference for feminine attire, but each feels a degree of unease over what in those days was still illegal in many states. As they each insist, they are not homosexual, for they have respectable careers, wives and families, but not all of these insistences are truthful.

Each of these men suffers the pain of their inner struggle which surfaces over the course of a weekend, as they clash with each other — mostly verbally, but on occasion violently. In that sense, Fierstein’s drama may remind you of a landmark play from that era about self-loathing gay men, The Boys in the Band.

Running the Catskills complex is a conventional businessman named George (Wayne LeGette), whose alter ego is the delicate Valentina, and whose wife Rita (Irene Adjan) is remarkably supportive of his secret life. Most of the guests at Chevalier d’Eon have known each other and their mutual predilection for years, but young Jonathon, a/k/a Miranda (Ryan Didato) is a newbie, who skittishly leaves his wife at home for a chance to give in to his female side.

Seemingly more at ease is wisecracking Army veteran Bessie (Roland Rusinek), whose Oscar Wilde epigrams and quips mask his fears and defenses. Gloria (Cliff Burgess) is a smart-mouthed troublemaker, Terry (Howard Elfman) is an older man set in his ways, too used to hiding his secret life to expect it to be openly accepted. That is exactly what Charlotte (Kevin Reilley), a cross-dressing activist, proposes with his effort to take their lifestyle proudly public, an action that most threatens Amy (Peter Galman), a revered judge.

Fierstein begins with humor, but he lights a definite fuse that ignites with impressive dramatic force. In these pre-Stonewall days, the government has no patience or respect for these men, who simply want a little private space, but what they receive instead is persecution and probable prosecution on gay pornography charges.

Director Adler gets completely committed performances from his cast members, all of whom leap with both feet into the cross-dressing aspect of their roles. And in the cases of Burgess and LeGette, at least, they make remarkably attractive faux-women.

Lyle Baskin’s multi-level scenic design is expert, even if it hardly looks as rundown as the bungalow colony is said to be. It is costumer Ellis Tillman whose work is so crucial to the success of the production. Not all the conflicts in Casa Valentina are resolved satisfactorily, but this still remains a fascinating corner of sexual history that playwright Fierstein shines a light on with due clarity.

Film: Just in time with the opening of movie theaters in Palm Beach County comes the season’s most … END_OF_DOCUMENT_TOKEN_TO_BE_REPLACED

Music: The very last concert Franz Joseph Haydn attended in his life was in March 1808, about a year … END_OF_DOCUMENT_TOKEN_TO_BE_REPLACED