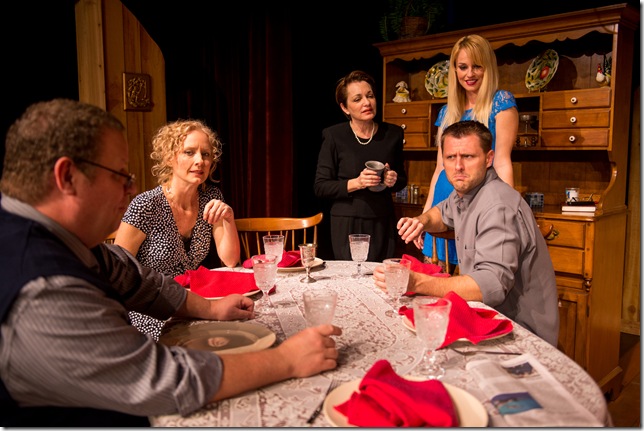 Whatever would the theater do without dysfunctional families? They are the subject of so many rip-roaring dramas and dark comedies, from Long Day’s Journey into Night to August: Osage County to Deborah Zoe Laufer’s Catskills clan in The Last Schwartz.

First seen at Florida Stage in 2002, the play has had an active life at regional theaters across the country and has come close to an off-Broadway production on two occasions. It has now returned to South Florida at Boca Raton’s Parade Productions, staged by the company’s artistic director, Kim St. Leon, who delivers on the play’s comic pungency, but misses when it comes to ethnic authenticity.

In addition to being about dysfunction, The Last Schwartz can also be filed under Reunion Plays. Four grown siblings return to the family home in upstate New York for the Yarzheit memorial service of their father. Of the four, only the daughter — stern, domineering Norma — has produced a son, so it could be the end of the line for these Schwartzes. What’s more, only Norma has any ties to Judaism, so that element of the family identity is in jeopardy as well.

Norma (Candace Caplan) is stubbornly parental to her three brothers, a source of much resentment. Oldest brother Herb (Ken Clement) married a Gentile named Bonnie (Kim Ostrenko), whose heartbreaking string of miscarriages has accelerated their lack of faith in God. Then there’s Simon (Mark Della Ventura), so fixated on astronomy that he has little human interaction and is growing blind, both metaphorically and actually.

The third, youngest brother, Gene (Matt Stabile), has escaped the gravitational pull of the family, relocating to California, where he directs commercials. He returns with his ditsy blonde girlfriend Kia (Betsy Graver), a would-be actress blithely unaware of Jewish rituals and devoid of Jewish guilt.

Put in close proximity for the weekend, the characters soon get on each other’s nerves as tensions prove explosive. Herb is eager to sell the family homestead, which Norma is adamantly against. And carefully guarded secrets start pouring out, threatening the status quo even further.

Somehow, Laufer is able to mine the situation for comedy, while retaining the play’s serious underpinnings. Director St. Leon isn’t always able to switch those gears fluidly, but on balance The Last Schwartz still musters a positive lasting impression. 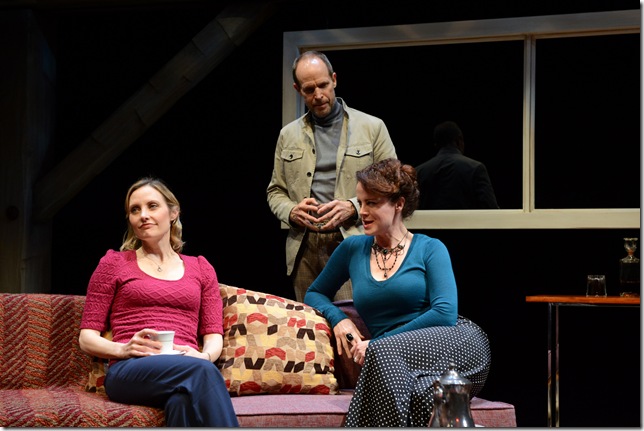 Nobel Laureate Harold Pinter is a master at creating mystery, as long as you do not mind that he is stingy at providing solutions.

Certainly that is the case with his 1971 inkblot drama Old Times, a triangular enigma about a long-married couple and the arrival in their home of a woman who may or may not be the wife’s roommate from 20 years earlier.

The three of them sift through their pasts, parsing their conflicting memories, trying to find an objective reality. That, of course, is an impossibility in Pinterland, but the effort is everything at Palm Beach Dramaworks.

For 14 years, the company has been devoted to “theater to think about.” Old Times does play with the audience’s head, but the result is more theater to be confounded by. Director J. Barry Lewis and his three-member cast — all making their Dramaworks debuts — render the script in a clipped, emotionally muted style that Pinter is so known for, but that does not prevent the experience from being an exercise in frustration.

Little is known with assurance, beyond the unexpected visit by Anna (Pilar Witherspoon) to the converted farmhouse residence of Deeley (Craig Wroe) and Kate (Shannon Koob). For more than 40 years, critics and scholars have been attempting to fill in the blanks with suppositions of what Pinter had in mind. Could Kate and Anna really be two halves of the same person? Might Kate have murdered Anna in a fit of jealous rage over Deeley? If so, could Kate be conjuring the ghost of Anna, trying to deal with unfinished business among the three of them?

Perhaps it is any, all or none of those possibilities. Pinter never divulged a preferred solution and nor do Lewis and his cast tip their hand in a particular direction. Surely there are some theatergoers who enjoy such an open-ended puzzle, but if you need to make an emotional connection with a play’s characters to sustain interest — even for the relatively brief 75 intermissionless minutes — Old Times is probably not for you.

The cast knows its way around those signature Pinteresque pauses and other prescribed tics and affectations. And the design elements are first-rate, from Victor A. Becker’s minimalist frame house to Paul Black’s stark and subtle lighting to the crisp casual costumes by Leslye Menshouse.

In among its weightier fare, Dramaworks is committed to exposing its audience to absurdist dramas from around the world. That is a worthy mission, but theatergoers need to be prepared for an adventure like Old Times into the realm of the opaque.

Film: Playwright August Wilson began his chronicle of the African-American experience throughout the … END_OF_DOCUMENT_TOKEN_TO_BE_REPLACED

Film: Just in time with the opening of movie theaters in Palm Beach County comes the season’s most … END_OF_DOCUMENT_TOKEN_TO_BE_REPLACED

Music: The very last concert Franz Joseph Haydn attended in his life was in March 1808, about a year … END_OF_DOCUMENT_TOKEN_TO_BE_REPLACED