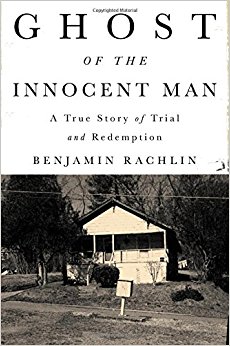 Willie J. Grimes was a mild-mannered, middle-aged black man who was convicted of first-degree rape and sentenced to life in prison.

But Grimes had nothing to do with the crime. The jury relied on flimsy evidence, such as the victim having picked him out of a hazy picture lineup. After Grimes spent 24 years in prison, he was released in 2012 when DNA evidence showed he was not the rapist. The actual perpetrator eventually was convicted of a string of assaults, including the rape in question.

Benjamin Rachlin’s Ghost of the Innocent Man opens with a graphic recounting of the rape, drawing readers into this criminal justice saga. The victim, Carrie Elliott, was a widow who lived alone in a quiet neighborhood in North Carolina. Grimes happened to be walking in the neighborhood the night she was raped in her home.

Rachlin is a stickler for detail about wrongful convictions. He waded through a mountain of court filings and innocence studies. At times the text suffers from too much detail, but that is a minor quibble.

The author explores the history of racial prejudice in the criminal justice system, as well as the ineptitude of some prosecutors and defense lawyers.

From the start, Grimes believed he would be cleared. He filed countless court appeals, which were turned down. He was a model prisoner, and was offered early release, but only if he would plead guilty. But Grimes rejected every such offer, knowing he was innocent. Pleading guilty would be a lie, he said.

Rachlin documents the extent of wrongful convictions nationwide. After the death penalty was put back on the books in Illinois in 1977, 12 inmates were executed. Another 13 convicts awaiting execution were exonerated based on new evidence. The governor then commuted 171 death sentences to life imprisonment for the remaining death row inmates to avoid the possibility of executing an innocent person.

A team of defense lawyers, prosecutors and judges created the North Carolina Innocence Inquiry Commission. Similar bodies have been established in other states.

This book can be read as a history of wrongful convictions and the campaign to end them. Hundreds of convicts have now been set free nationally when DNA testing proved their innocence. Willie Grimes’ conviction finally was overturned when a DNA test of a hair sample found at the rape scene did not match his hair. It matched the hair of another inmate who then admitted he was the rapist.

Life in prison could be brutal. Grimes had trouble sleeping with the noise. Rachlin describes arbitrary rules and frequent moving of inmates within prisons and among prisons. Grimes used crumbs to draw mice into his cell and keep them as pets.

During his 24 years behind bars, several relatives and friends died, deepening his sense of isolation and injustice. Grimes became deeply religious, embracing the Jehovah’s Witnesses. Religion helped him cope with his wrongful incarceration.

After his years behind bars he finally walked out of prison, “free at last.” He displayed no bitterness or blame. He was 66, having spent a good portion of his life behind bars. “He felt wetness on his cheeks before he realized he was sobbing. Then something loosed inside him and all at once he was kneeling there in the hallway, his body quivering. ‘Thank you,’ he whispered to the empty house. His chest and skull throbbed. He stood. He was leaping, hurling his arms out wildly. ‘Thank you,’ he shouted. ‘Thank you.’ ”

Ghost of the Innocent Man: A True Story of Trial and Redemption, by Benjamin Rachlin; Little, Brown; 387 pp., $27

Film: Playwright August Wilson began his chronicle of the African-American experience throughout the … END_OF_DOCUMENT_TOKEN_TO_BE_REPLACED

Film: Just in time with the opening of movie theaters in Palm Beach County comes the season’s most … END_OF_DOCUMENT_TOKEN_TO_BE_REPLACED

Music: The very last concert Franz Joseph Haydn attended in his life was in March 1808, about a year … END_OF_DOCUMENT_TOKEN_TO_BE_REPLACED