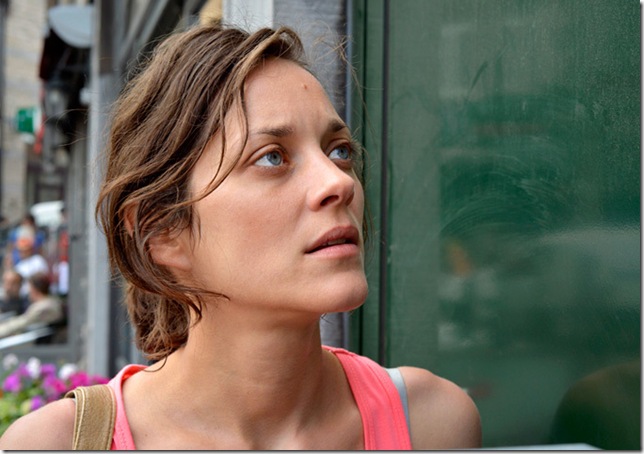 A cruel and sweeping movement of capitalism’s chilly hand leaves a damaged woman in its wake in Two Days, One Night, the Dardenne brothers’ latest quietly gripping moral inquiry into the human condition.

In the great Belgian directors’ first feature since 2011’s extraordinary The Kid with a Bike, they’ve cast a bona fide international star, Marion Cotillard, whose combination of braveness and vulnerability fits snugly into their demanding aesthetic of lengthy takes and unflinching camerawork (she was nominated for a Best Actress Oscar for this performance Thursday). She plays Sandra, a married mother of two who is recovering from a bout of severe depression that resulted in a leave of absence from her job at a solar-panel factory. As her boss discovered, with a few workers logging overtime hours, the factory could continue apace without her, and he coldly presented her coworkers with an ultimatum: a vote that could save either her job or their own considerable bonuses.

As the film begins, she’s informed by a colleague that the vote skewed overwhelmingly against her. She begs her boss for a second, secret ballot the following Monday, and she spends the weekend, and most of the film’s screen time, attempting to convince her coworkers, one by one, to reverse their votes — to express humanity to a desperate woman over their financial well-being.

Two Days, One Night is a road movie of sorts, with Sandra beseeching her fellow workers like a House whip corraling her representatives into voting the right way. She finds them at home, at cafes, repairing cars, coaching children’s sports and otherwise occupying themselves in off-the-books employment — a sobering indictment of an economy on the skids where nearly everyone she visits is just as in need as she is.

Their reactions run the gamut, from avoidance and dismissal to shame and regret for voting for themselves over the livelihood of a depressed person. In a couple of cases, her appearance exacerbates filial conflicts. For most of them, it becomes difficult to defend their bonuses when the victim is more than a name and a punch card: She’s standing in front of them in the flesh.

All of the characters’ reactions sound reasonable and understandable; the Dardennes’ humanism is limitless, and they empathize even with those who stand in their protagonist’s way. The brilliance of Two Days, One Night is that it confronts the viewer to make the same hard choices as Sandra’s colleagues, planting us in the shoes of others more or less fortunate. The movie’s premise is a hypothetical worthy of a Michael Sandel lecture at Harvard: Vastly improve the comfort of yourself and your family, or ensure that a relative stranger, who happens to work in your proximity, can stay off government assistance and feed her family?

To that end, the film’s story is a microcosm of larger ideas; Two Days, One Night is about the clash between collectivism and self-interest, between Karl Marx and Ayn Rand, between capitalism and morality. As Pete Seeger and others have demanded to know, which side are you on?

Questions such as these aren’t entirely new to the Dardenne canon; their movies have long forced us to right our own moral compasses, usually by observing tragic accidents and their characters’ responses to them. This time, there is a dialing down of intensity: There is little of the ferocious physicality, invasive camera placements and extreme emotions that have made previous Dardenne movies so viscerally unforgettable.

But the intellectual engagement of Two Days, One Night is as strong is ever. The brothers never fail to surprise us, crafting an odyssey through the moral turpitude of the modern workplace that neither panders to our sentimentality nor depresses us. It’s simply exquisite.

Film: Playwright August Wilson began his chronicle of the African-American experience throughout the … END_OF_DOCUMENT_TOKEN_TO_BE_REPLACED

Film: Just in time with the opening of movie theaters in Palm Beach County comes the season’s most … END_OF_DOCUMENT_TOKEN_TO_BE_REPLACED

Music: The very last concert Franz Joseph Haydn attended in his life was in March 1808, about a year … END_OF_DOCUMENT_TOKEN_TO_BE_REPLACED