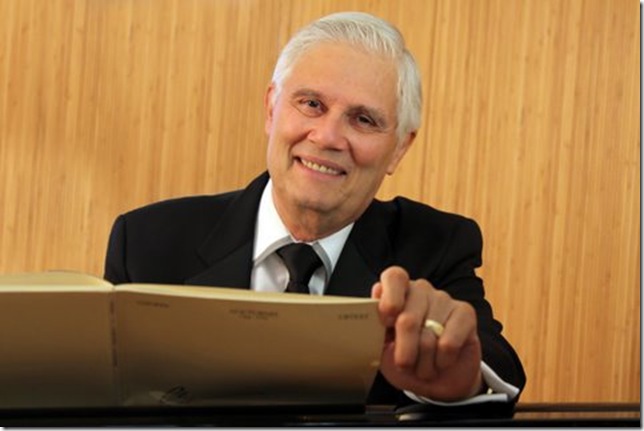 The stage at the Society of the Four Arts for Wednesday’s Palm Beach Symphony concert had but a few chairs and a concert grand piano on display. “No percussion, no brass, no winds,’’ said the young couple behind me, sotto voce, before the concert began. Their keen observation spoke volumes.

Ramón Tebar, after five years at the helm of the orchestra, has cleverly matched his programming skills to the various venues: J.S. Bach at Bethesda-by-the-Sea Episcopal Church; two massive symphonies at Mar-a-Lago’s 16-chandeliered great hall, and so on for the other movable concerts in the series. The world of symphonic acoustics is a tricky one. Halls are either too ripe or simply dead. Tebar has tamed the beast, for now.

Opening the all-string orchestra program was Chopin’s First Piano Concerto (in E minor, Op. 11) with the 80-year-old Agustín Anievas at the keyboard. Chopin wrote it for himself with string accompaniment and performed it straight out of school in Warsaw in 1830 at age 20. Three weeks after, he headed for Vienna and a European concert tour, ending up in Paris where he had to stay because of political unrest in Poland. He never returned to his homeland.

Choosing not to make his piano entrance “bold, with a fortissimo dynamic” as the program note stated, Anievas started quietly, with a few obvious wrong notes, but soon struck a nice balance with sensitive and beautiful playing. He has a touch so delicate, it’s as if he were playing for an audience of one.

At the outset of the second movement (Romanze), orchestra and soloist blended nicely. Anievas played the runs like splashing falling waterfalls as the notes tumble downward. His slow tempo provided some seductive and enchanting music. The Rondo, marked Vivace, has a three-note string introduction repeated by the piano. Frankly, it wasn’t sprightly enough for me, and some of his accentuations missed the beat. And the whole concerto was slow, coming in at 45 minutes. But what a refined talent Anievas turned out to be.

Greig’s Holberg Suite of 1885 followed. Tebar’s unbounded energy got the best out of  his small string orchestra : 12 violins, four violas, two cellos and two double basses. Two more cellos would have made all the difference; however, the Praeludium went well. The Sarabande conjured up imaginary scenes of Norway’s fjords and sloping terraces. The Gavotte drew delicate playing from everyone. After the initial opening, jig-like tunes pour out in profusion underlined by folk-sounding basses.

The Air, a long singing melody in the minor key, had some lovely playing from the two cellists. Lastly, the Rigaudon provided some rapturous music from the orchestra and the solo violin of concertmaster Evija Ozolins rose sweetly above her colleagues as they plucked away at their accompaniment.

Tchaikovsky’s Serenade for Strings (in C major, Op. 48) closed the program. These four movements brought out the very best of this string orchestra. Tebar, eschewing a podium, was on the same level as the players, using only his beautifully expressive hands to lead the musicians.

The orchestra seemed energized by the first movement; their playing was exceptionally good. A hymn-like ending, music influenced by an Orthodox cathedral service perhaps, gave us a high standard of orchestral unity. Valse, the three-beat second movement was a pure delight, with its familiar tune and lovely meted-out rumblings from the lower strings as the violins stridently split the tune up between themselves.

In the Elegia, a sweet melody is quietly forthcoming from the first violins as the second violins accompany with plucked notes. It builds to a harmonious wash of yearning strings, then the tune comes from all the violins, playing the elegiac music exquisitely. At this moment the orchestra sounded glorious; Ramón Tebar drew some great work from his colleagues.

The Palm Beach Symphony performs at 7:30 p.m. Monday, Jan. 5, in the DeSantis Family Chapel at Palm Beach Atlantic University. On the program are three works by Wagner: The Flying Dutchman overture, the prelude to Act I of Lohengrin, and the Prelude and Liebestod from Tristan und Isolde. They will be followed by the Fourth Symphony of Anton Bruckner. Call 561-655-2657 or visit palmbeachsymphony.org.

Film: Just in time with the opening of movie theaters in Palm Beach County comes the season’s most … END_OF_DOCUMENT_TOKEN_TO_BE_REPLACED

Music: The very last concert Franz Joseph Haydn attended in his life was in March 1808, about a year … END_OF_DOCUMENT_TOKEN_TO_BE_REPLACED