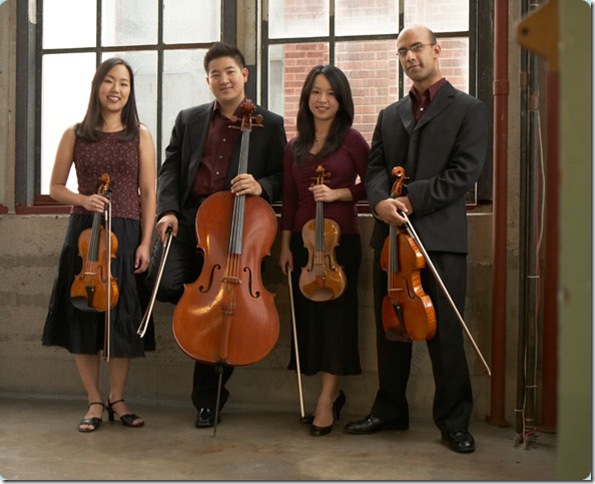 Editor’s note: Here is a late review from a concert last month. Technical difficulties prevented it from being posted until now.

By nature of the brief, intimate hold it has on the audience, a string quartet is usually less experimental than a large ensemble, needing to make sure each piece counts and has maximum impact.

In its appearance March 14 in the Duncan Theatre’s Classical Café series, the Canadian foursome known as the Afiara String Quartet offered on a program of Beethoven and Dvořák a new four-movement work, written two years ago for the group by the American composer Brett Abigaña. His Quartet No. 2, dedicated to the memory of the mother of violist David Samuel, proved to be a gentle, intensely beautiful piece full of melancholy harmonies, tender melodies and an expert sense of line.

In two of the movements, Abigaña writes the kind of tonal, emotional music based on static cells that the wider world embraced in the Gorecki Third Symphony, and in the other two, spiky but easily digestible language couched in familiar forms and a forthright cheekiness, especially in the finale, that made them richly enjoyable. The quartet also sounds influenced by English music in the modal character of some of its themes and progressions, and by Shostakovich in the finale.

But whatever his influences, Abigaña has succeeded in creating a compelling piece of music with a sound world that’s all its own and communicates admirably. It received a committed, lovely performance from the Afiaras, who gave it the kind of lushness its sublimated musical backstory seems to require.

In the opening Psalm, the spotlight was on violist Samuel, who plays a long and heartfelt solo in the keening higher registers of his instrument, on top of a barely moving chordal pattern in the two violins. He plays with a brightness of tone that helps carry the music to a peak of real power. The Berceuse that came next is more of a country dance than it is a lullaby, and the tricky rhythms of its first section were expertly handled.

The third-movement Vocalise was sort of a counterpart of the Psalm, this time with the deliberate tempo set in motion by cellist Adrian Fung, and violinist Valerie Li soaring above it with another plainsong-style effusion over a slow, placid harmonic stasis. The fiery finale (March) demonstrated the Afiara’s first-rate ensemble; most of the music goes like the wind, but the listener was able to hear all the lines with clarity and unity, and its abrupt but muscular ending won strong plaudits from the audience in the Stage West black-box theater.

The Afiara opened the concert with the Quartetto Serioso (Quartet No. 11 in F minor, Op. 95) of Beethoven. They began aggressively with a very fast opening, which set the stage for a high-energy reading of the movement that was distinguished by its tight ensemble and intense attacks on moments such as the big upward rocket for the four players in the middle. The slow movement had lovely playing from Samuel and Fung, and a well-judged sense of rapt solemnity.

The third movement had a toughness and ferocity that stood in stark contrast to the second, and in the finale, the group’s sturdiness of ensemble again came to the fore in the lickety-split coda, which ended the piece in bravura style.

The group’s performance of the work was everything Dvořák should be: Rich with beautiful string writing, abundantly tuneful, full of color, dance and folk energy. The second movement was particularly well-done, with each of the four players (including violinist Yuri Cho) getting everything they could out of this lovely music, and making sure it communicated with a very appreciative audience.

The Duncan Theatre’s Classical Café series resumes next Jan. 9 with the Amernet String Quartet, based at Florida International University, who will bring along a guest pianist as yet unnamed. The prodigious young pianist Conrad Tao is next on Jan. 23, followed by the Merlin Trio, a piano trio based at Western Michigan University in Kalamazoo, on Feb. 27. The series concludes March 13 with the Škampa Quartet, a fine Czech string foursome making a return appearance. Call 561-868-3309 for more information or vist www.duncantheatre.org.

Film: Playwright August Wilson began his chronicle of the African-American experience throughout the … END_OF_DOCUMENT_TOKEN_TO_BE_REPLACED

Film: Just in time with the opening of movie theaters in Palm Beach County comes the season’s most … END_OF_DOCUMENT_TOKEN_TO_BE_REPLACED

Music: The very last concert Franz Joseph Haydn attended in his life was in March 1808, about a year … END_OF_DOCUMENT_TOKEN_TO_BE_REPLACED