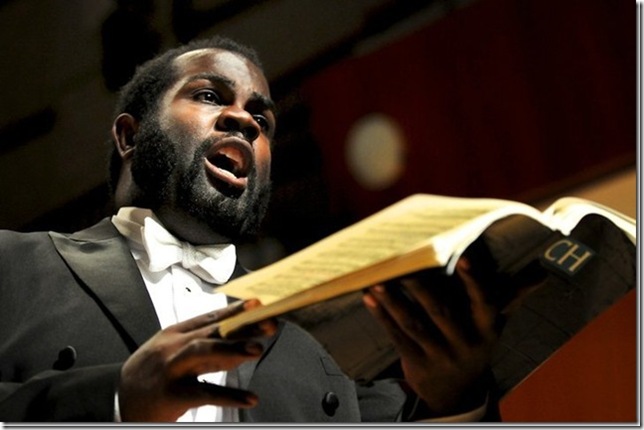 One of Seraphic Fire’s longtime members stepped into the solo spotlight last week with a concert of 18th-century opera and sacred music, and made an eloquent case for the beauty of the countertenor voice.

Reginald Mobley, whom everyone calls Reggie, was the featured soloist in a program with Seraphic Fire’s Firebird Chamber Orchestra that paid tribute to the art and life of Carlo Broschi, the legendary Italian castrato known as Farinelli. Mobley sang four arias associated with the singer as well as a sacred motet by Nicola Porpora, Farinelli’s first teacher.

It must be said from the beginning that one of the joys of seeing Mobley in Seraphic Fire all these years is hearing his beautiful alto coming out of a big, tall man who looks more like a linebacker for the Miami Dolphins than the P.G. Wodehouse party guest his name might suggest. And his sartorial choice for Saturday’s concert at Fort Lauderdale’s All Saints Episcopal Church — an all-black suit, white bow tie and spats, plus a beard that culminated in a long, thin finger of hair under his chin — told the audience that this was an artist who knows how to get your attention.

But it was the singing that mattered most, and Mobley brought to all these pieces a lovely, haunting vocalism in which his intonation was spot-on, his breath control prodigious, and his mastery of the style definitive. His elaborations in the da capo sections were elegant and cautious rather than florid and explosive, which had the effect of giving his performance a feeling of reverence and respect.

The Firebird Chamber Orchestra, led by founder Patrick Dupré Quigley, also performed two instrumental selections, an overture by Vivaldi and a suite by Telemann. Incarnated this time as a group of 13 strings and an organist, the group provided a demonstration of the success of the early music movement: Young performers like this are fully conversant with Baroque style and can play it brilliantly, and they did.

The opening work, the overture from Vivaldi’s opera Arsilda, is an admirable example of the origins of the symphony; it’s a three-part work that opens with busy confidence, slows down to tender melancholy, and ends with a sprightly dance. Quigley, who wielded a baton instead of using just his hands, led a crisp, clean reading of the piece that set the stage admirably for the songs to follow.

Three of the four arias Mobley sang were from the countertenor’s greatest hits repertory, and began with a punchy version of Fammi combattere, from Handel’s opera Orlando. It was not as fast as some versions, which made for greater presence, and Mobley sang with force and precision. Vedrò con mio diletto, from Vivaldi’s Giustino, which has a mournful melody over chopped chords, is a good fit for Mobley’s style; he likes to linger in beautiful tunes, and his elaborations on the second time through were tastefully done.

His breath control was on clear display in the next aria, Tu volesti, lo comprendo, from Hasse’s one-act serenata Sei tu Lidippe, ò il sole, with its charming, dance-like melody and long strings of triplets. Mobley unfolded them with ease and enviable smoothness, nicely illustrating the text about a god’s jealousy of a beautiful girl. Handel’s Caro sposa finished the set, and both singer and orchestra brought a higher level of commitment to it; this is music of greater depth and variety than Hasse or Vivaldi, and its measures of sorrowful minor-key counterpoint paint a compelling picture of loss and grief. From his first long-held fifth above the tonic, a Handel trademark, he suffused the aria with drama, power and poignancy.

The orchestra came next with a rarely heard work of Telemann, his Burlesque de Don Quixote, an eight-part suite evoking scenes from the Cervantes novel (the program book listed only six parts). Quigley led a vigorous, elegant reading of this suite, and once again the 14 players showed how well-versed they are in performing music that’s three centuries old.

It was not the fashion at that time to alter the key when writing such suites, and to our ears it can be tiring hearing things in the same key for section after section. But Quigley and the orchestra made it scarcely noticeable, playing the second movement, Don Quixote Awakens, with great softness and rhythmic precision, and the fifth, Sancho Panza Tossed in a Blanket, with comic upward glissandi in the violins.

In the seventh movement, Sancho Panza’s Mule, the music shrank to a string quartet, which played expertly, and the speedy finale, Don Quixote Asleep, bustled along with engaging energy. All told, it was a very fine performance of a worthy piece of music that should be heard with greater regularity.

Mobley returned to the stage to perform Porpora’s motet Salve Regina to close the concert. This is a lovely work, outwardly operatic perhaps, but full of feeling and harmonic richness. All the standards that had been in place from the beginning of the evening were operative at the end: Mobley sang with care and loving attention to the music, added modest flourishes at cadences, and concentrated on spinning out yard after yard of beautiful tone. The Firebird orchestra was unimpeachable, and Quigley a fine accompanist.

Brought back for several curtain calls, Mobley said he would bring out his “suitcase aria,” which in his case was an a cappella spiritual, There Is a Balm in Gilead. While some countertenors sound closer to mezzo or soprano, Mobley is an alto, and there is a haunting character to the voice, much more evident up close and unaccompanied, that makes it most distinctive.

In the ad lib melismas at cadential points in this old hymn, he circled around the flat sixth of the scale, adding a mournful, pleading quality that was unusual but mesmerizing. Here, too, was the sound of someone with air to spare, as he floated long lines over seemingly uninterrupted breaths. It was a music of faith, and the All Saints audience took it in with unwavering attention, rewarding him at the end with the kind of satisfied applause that seems always to accompany a Seraphic Fire event.

Seraphic Fire appears next month with the Spektral Quartet of Chicago in Haydn’s Seven Last Words, which will present the original choral parts with Haydn’s own string quartet reduction. Concerts are set for April 9-13; the concert at Boca Raton’s St. Gregory’s Episcopal Church is set for 7:30 p.m. April 10. There will be two concerts after that, in Chicago on April 16 and Appleton, Wis., on April 18. For more information, call (305) 285-9060 or visit www.seraphicfire.org.

Film: Playwright August Wilson began his chronicle of the African-American experience throughout the … END_OF_DOCUMENT_TOKEN_TO_BE_REPLACED

Film: Just in time with the opening of movie theaters in Palm Beach County comes the season’s most … END_OF_DOCUMENT_TOKEN_TO_BE_REPLACED

Music: The very last concert Franz Joseph Haydn attended in his life was in March 1808, about a year … END_OF_DOCUMENT_TOKEN_TO_BE_REPLACED