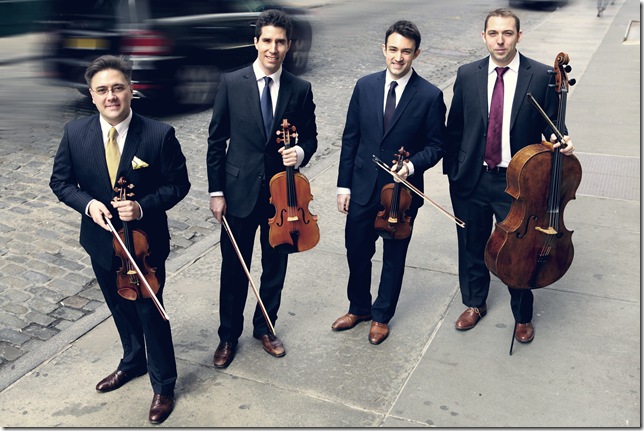 The Escher String Quartet came to the Society of the Four Arts on Sunday, and everything about its performance was spotless and perfect.

So spotless and so perfect, that at times it became bloodless, even while the foursome was demonstrating an astonishing display of musical excellence that was a triumph of instrumental wizardry and interpretive subtlety.

This was a bigger issue in the first of the two large works on the three-piece program, Béla Bartók’s First Quartet (in A minor, Op. 7), a remarkably original work — as indeed all six of his quartets are, and this one even more so because of its early vintage (1908-1909). It’s hard to imagine a more precise, carefully wrought opening than the Escher gave it: Essentially a somber fugue that inhabits a slippery tonal landscape, the first pages of the work announce a language that is at once deeply serious and thoroughly daring.

Accuracy of intonation is critical here; if the falling minor sixth isn’t just so, the ear loses its way in the thicket of the sliding harmonies that come next. Each of the four players of this New York-based quartet — violinists Adam Barnett-Hart and Aaron Boyd, violist Pierre Lapointe and cellist Brook Speltz — could distinctly be heard in this opening, and to a man they had beautiful tone quality and complete technical command.

The work also is hugely effective at using small rhythmic cells to create a sense of tremendous forward motion even in the first moments of the quartet. For the Escher, this driving rhythm was like the gears of a high-end machine, and its emotional aspect one of chilled-vodka clarity. The third movement, in which the motives heard throughout the piece are brought back in increasingly frenzied fashion to climax on three giant unresolved minor-ninth chords, built steadily and relentlessly, without a note out of place.

But it could have used a touch of Romantic excess, despite Bartok’s highly intellectual approach to music-making; this was the decadent period in which the music came to life, and it gains something if underneath all that cerebral construction you can hear the sound of a scream. The music is more effective if it sounds on edge rather than demonically calculating, and despite the brilliance of the Escher Quartet’s playing, I missed the sense of struggle and release, of heat and sweat, that would make the last minutes of the quartet not just satisfying but overwhelming.

The Bartók was on the first half of the program, while the second was devoted to the Quartet No. 7 (in F, Op. 59, No. 1) of Beethoven, the first of his three Rasumovsky quartets. This epic work has been called the Eroica Symphony of Beethoven’s string quartets, and not just because both works open with quiet repeated chords over the main theme in the cello voice. Both pieces also generate an impressive amount of music from basic material, are unprecedentedly long, and remake the genre in important ways.

The Beethoven afforded the Escher the opportunity to demonstrate the exceptional totality of its art, notably so in its attention to dynamic detail. Few quartets can play so softly and so accurately, or shift dynamics so suddenly (a staple tic of Beethoven’s) and so handily. This comes, too, from the level of communication in the four players enjoy, and which allow it to do rare and lovely things, such as a passage in the early first movement in which Boyd played the one line in motion with the slightest amount of rubato, and the other three musicians clung to him with perfect snugness all the way down.

The whole performance had an ideal mix of epic breadth and the tiniest of intimacies, with the first movement big-breathed and warm, and the second carefully calibrated to emphasize Beethoven’s frequent surprise moves. But if the second movement was faultless though somewhat stiff, few quartets can play the third movement as ideally as the Escher did Sunday.

Here, all of the operatic fussiness central to the style of early 19th-century quartet writing became pure song. Cellist Speltz played with radiance and spot-on intonation, even at the cruelest reaches of his upper register; Barnett-Hart, Boyd and Lapointe each shifted between the movement’s long singing lines and murmuring 32nd notes without a hint of any difficulty. This is the way this music is supposed to sound, at once ethereal and earthbound, a breathtakingly beautiful meditation that takes the listener from gritty Vienna to an otherworldy place of endless peace.

The concert opened with two of the short pieces for string quartet collected after Felix Mendelssohn’s death in 1847 as Four Pieces for String Quartet (Op. 81). The Andante and Scherzo, written at the end of his life as the two middle movements of an incomplete seventh quartet, probably in A major, are fine examples of Mendlessohn’s art, one of them in its straightforward melodiousness, the other in the elfin vein that this composer repeatedly mined throughout his career. The Escher played them with modesty and scrupulous care, fitting the ambitions of the music expertly.

There is no question that the Escher String Quartet is a major quartet from the standpoint of its exceptionally high level of sheer performance accomplishment and its desire to carve out a distinct place for itself, as witnessed by its cycle of the complete quartets of the Schoenberg disciple Alexander von Zemlinsky. One only wishes for their future that a foursome that can do so much so well, do just that much more by loosening the reins a little and giving its auditors some more places to put its emotional investment.

Film: Playwright August Wilson began his chronicle of the African-American experience throughout the … END_OF_DOCUMENT_TOKEN_TO_BE_REPLACED

Film: Just in time with the opening of movie theaters in Palm Beach County comes the season’s most … END_OF_DOCUMENT_TOKEN_TO_BE_REPLACED

Music: The very last concert Franz Joseph Haydn attended in his life was in March 1808, about a year … END_OF_DOCUMENT_TOKEN_TO_BE_REPLACED