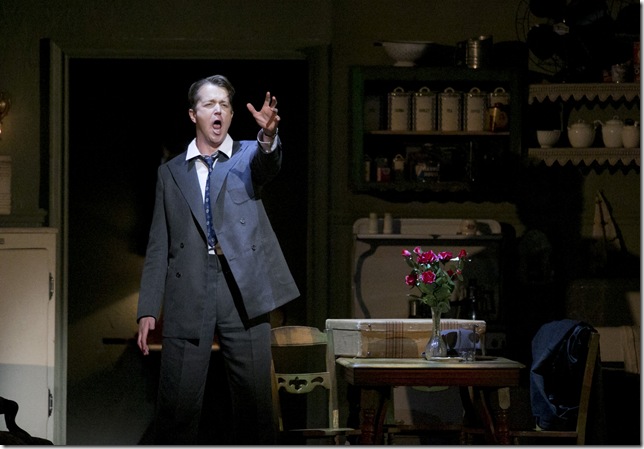 The two big questions for the new American work now in its world premiere at Palm Beach Opera are these: Does it succeed as a compelling piece of theater? And does it have a future?

The answer to both of these questions is Yes, but for the second question, it may take some more work for the opera to have the kind of legs its producers and well-wishing audiences would dearly like it to have.

Enemies, A Love Story, written by composer Ben Moore to a text by Nahma Sandrow drawn from a novel by Isaac Bashevis Singer, has a lot going for it as it is. The story of a Jewish intellectual and writer in 1948 New York who has survived the Holocaust and married the Christian Polish farm girl who saved him, only to take up with a fellow survivor as a mistress and then discover that his original wife, thought dead, is in fact alive, Enemies has plenty of dramatic interest that Saturday night’s audience at the Kravis Center had no difficulty understanding, enjoying and following.

The production, designed by Allen Moyer, is inspired and striking, and it solves the problem of its 24 scene changes quite handily: Three New York City apartments are placed side by side and rolled on and off, and a scene at another apartment, this one for a rabbi’s Hanukkah party, comes up from the back. The three interiors are quite small, not much more than boxes, and they are all topped by a huge video screen that flashes scene-setters such as the period street fronts of the era, newsreel footage of Holocaust survivors being welcomed by family, snow and stars, and cartoon heads of animals at the Bronx Zoo (who at one point don yarmulkes).

These videos, well-designed by Greg Emetaz, fill in a lot of narrative background, but their constant presence above the boxes below creates a feeling of claustrophobia, which is surely deliberate and works ideally to drive home Herman’s feeling of being trapped. Aaron Black’s lighting design is first-rate, particularly when he has to show early-morning light coming in from the side to different kitchens and living rooms. Other pieces of this interior drama — a phone booth, the rabbi’s couch and desk, and cage bars at the Bronx Zoo — are moved in expertly; it was a pleasure to see the technical aspects of this show done so well that you forgot that this was only the second time the show has been offered to the public. 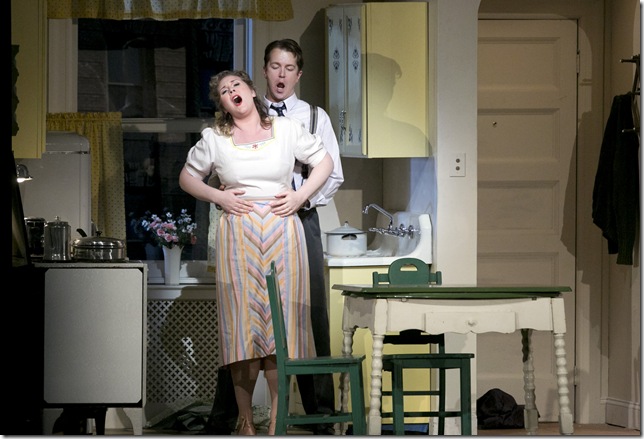 Moyer’s set is filled with a number of fine young North American singers, beginning with Canadian baritone Daniel Okulitch as Herman, and continuing especially with the female protagonists: Caitlin Lynch as Yadwiga, Danielle Pastin as Masha, and Leann Sandel-Pantaleo as Tamara.

Okulitch was a very fine Herman, who judging by the amiable bad-guy booing at the curtain call came off for Saturday’s audience as a rather unsympathetic central character. Okulitch has a warm, rather narrow baritone sound that he uses to clear and precise effect, with excellent diction and good breath control. His late Act II aria (“If the scroll of life rolled backward”) was affecting and moving, with a real sense of nostalgia and loss and a sure sense of line and phrasing. His acting was good, but could have been broader; one wanted a stronger impression of the inner turmoil he was going through, which he conveyed largely by grimaces and nervous hand movements.

As Masha, Pastin had the most emphatic female role, a part that requires her to switch between fury, desperation and loneliness with equal force. She has a powerful soprano voice that in its higher registers has a floating quality ideal for someone like Puccini’s Musetta, and it was vividly on display during the Act II aria (“Sometimes I close my eyes”) in which she sings about the normal life she so craves and cannot have. She is a fine stage actress, too, with believable fits of temper that were paired with equally believable fits of neediness and lust for Herman. It was a stirring performance, and the audience gave her a fervent ovation. 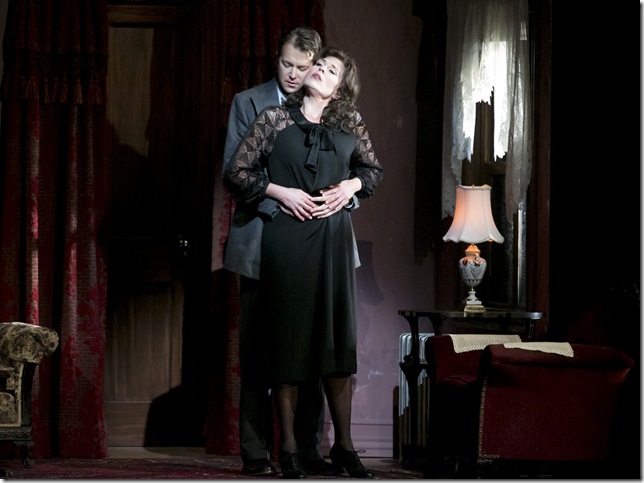 Equally as good in a more limited role was Sandel-Pantaleo as Tamara. Hers is a dark, strong, beautiful mezzo voice with real character, the kind of voice that allowed her to project psychological insight as well as notes. Tamara doesn’t have anything quite as demonstrative to sing as Masha, but in her Act I aria (“There in that field”), and in the evocative women’s trio that opened Act II, Sandel-Pantaleo sang with memorable force and gravity. She acted well, though at times her performance could have used more definition, particularly in the late scenes with Herman; Tamara has come to terms with her life, but she also has become something of a moral compass, and it would be have been good to feel some more of that firmness.

As Yadwiga, Lynch was excellent, with a big, open-sounding soprano that sailed easily into its upper compass, and which was most impressive in her Act I aria (“The farmhouse, the pasture”) and in the Act II trio, where she moved engagingly from musing about Coney Island into rhapsodies about taking her newborn out for a stroll. The role is drawn circumspectly, but Lynch gave it vivid life, especially when she sees Tamara come back from the dead, as she thinks, frantically crossing herself.

The very different characters of the three voices here were shrewdly cast; they were as varied from one another as Kaye Voyce’s handsome costumes. While the events of the opera are set in motion by a man, this is fundamentally a girl-power kind of show, and these three marvelous singers carried the bulk of the work beautifully.

Minor roles were sung well across the board, with mezzo Jennifer Roderer very fine as a large-voiced Shifrah Puah, Masha’s mother, and baritone David Kravitz best of all as Rabbi Lampert, Herman’s employer. Kravitz has a modest baritone, but he projects it superbly; his voice carried admirably well in all of his scenes, and he was by far the easiest to understand without referring to the English surtitles.

The Palm Beach Opera Chorus has a small role as Hannukah party guests, but they were terrific in their very brief appearance, with a much-needed balm of multiple voices that gave the opera some unexpected richness deep into Act II. Conductor David Stern led a fine Palm Beach Opera Orchestra, which tended to play quietly and non-aggressively, a characteristic made more noticeable when contrasted with the very loud live klezmer band that played in the lobby during intermission. 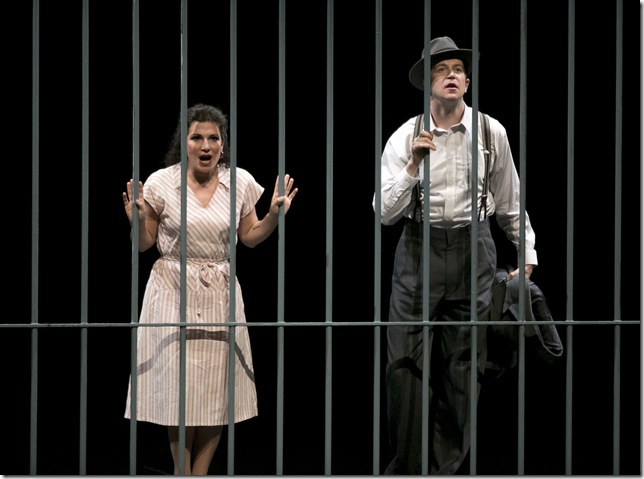 Sam Helfrich’s stage direction was exemplary, with lots of good movement to keep the eye interested (it’s a story that takes place in a hustle-bustle new country for its characters), and important parts of the action carefully staged to get the point across. It’s a hard thing to direct, given the cramped spaces of much of the action, but Helfrich was able to keep his singers persuasively occupied.

Sandrow’s libretto is quite good, a strong work of drama that has interesting action but also allows enough time for its audience to feel the psychological barriers its characters cross. It has plenty of poetic imagery, especially when the women are remembering or dreaming, and that’s crucial to the effectiveness of any opera.

And yet, the most important element of any opera is the music. A bad libretto can’t kill great writing, just as a great libretto can’t save bad music, and the future success of Enemies will depend on the strength of Moore’s score. And here the record is mixed.

Moore’s score is unfailingly melodic, pleasant and sweet, even when its dramatic lines have the spiky architecture of so much other contemporary vocal writing. In the big set pieces, he has constructed a tone and style for the aria in question that give it a natural arc and make it easy to follow. He also is good at pastiche music, with hints of klezmer, a jazz waltz and carousel music broadening the work’s tonal palette.

He is primarily a composer of self-contained song, with a gift for attractive tunes and an old-fashioned harmonic sense that evokes the era of the opera quite effectively. But his music often lacks dramatic profile and urgency, particularly in Act I, which tended to drag amid all that mildness. Act II was a good bit better, in part because it starts with the carousel pastiche and moves to a crowd scene in the middle, all of which gives the ear something fresh to listen to.

Also, Moore and Sandrow tend not to set up a couple of the arias, in particular the first one, “Fly, little bird,” which simply starts out of the blue — acceptable in normal conversation, harder to understand in opera — and Tamara’s “Close by the shore,” her comfort song for a terrified Yadwiga, also not understandable as the gesture it is until the aria has begun.

Moore’s orchestration, for an orchestra with a Broadway pit band at its core, was effective if not particularly varied; there were some juicy, soaring horn countermelodies and rich string writing that gave his tunes a fat velvet coat in their warmest moments, but the scoring needed some more colors to make the music stand out.

At its best, Enemies has compelling beauties such as Tamara’s “There in the field,” but it loses momentum in the music that moves the drama along. Case in point: During the reunion scene between Tamara and Herman, as Tamara explains how she came to New York, the music sounds almost comic as they talk back and forth. It’s defensible as music for two people having this kind of conversation, but surely what the drama needs at that point is something much more unsettled and ominous; after all, this is a person Herman is certain had been shot dead in a field and who has made some irrevocable choices because of it.

All of which is quite picky, and detracts from the message here, which is that a South Florida institution of more than half a century’s standing has mounted a world premiere, which not only elevates its standing as a company but the arts scene of the whole region. This is the kind of thing that raises the profile of this area as more than sand and sun, and general director Daniel Biaggi and board vice chairman Sandy Fisher deserve every plaudit that comes their way for making this happen.

They have done all of us a great service, and also advanced the cause of American opera. That’s the difference between being just an arts organization, which the company of course is and has been, and an arts leader, which after Enemies, Palm Beach Opera is now.

ENEMIES, A LOVE STORY will be presented again today at 2 p.m. at the Kravis Center for the Performing Arts, West Palm Beach. Call 833-7888 or visit www.pbopera.org; tickets also are available at the Kravis door or by calling 832-7469.

Film: Playwright August Wilson began his chronicle of the African-American experience throughout the … END_OF_DOCUMENT_TOKEN_TO_BE_REPLACED

Film: Just in time with the opening of movie theaters in Palm Beach County comes the season’s most … END_OF_DOCUMENT_TOKEN_TO_BE_REPLACED

Music: The very last concert Franz Joseph Haydn attended in his life was in March 1808, about a year … END_OF_DOCUMENT_TOKEN_TO_BE_REPLACED