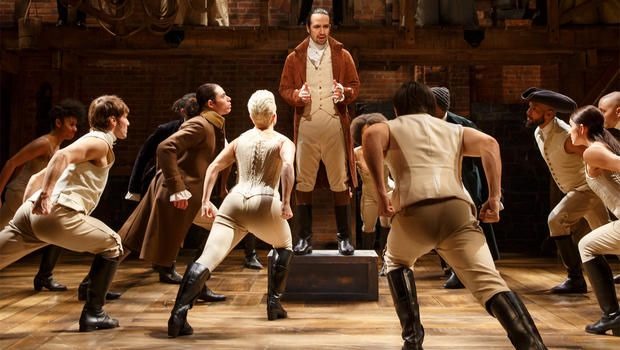 Lin-Manuel Miranda and the cast of Hamilton. (Photo by Joan Marcus)

With this week’s Tony Award nominations, the Hamilton juggernaut continues. The Lin-Manuel Miranda musical about the first Secretary of the Treasury has been a scorching hot ticket since it arrived on Broadway last summer. Now, with this year’s Pulitzer Prize for Drama in its pocket and only half-kidding credit for keeping Alexander Hamilton’s mug on the $10 bill, the show received 16 Tony nominations – a new record total.

Its win for the season’s best musical is a foregone conclusion, but since the show got two nominations for best leading actor in a musical (Miranda as Hamilton and Leslie Odom, Jr. as his nemesis and dueling opponent Aaron Burr) and three nominations for best featured actor (Daveed Diggs, Jonathan Groff and Christopher Jackson), Hamilton’s win total – except in the case of ties – could “only” reach 13. If that were to happen, and it very well could, that would be a new win total, besting The Producers (2002), which won 12.

In addition to those nominations mentioned above, Hamilton will be vying for best direction (Thomas Kail), choreography (Andy Blankenbuehler), score (Miranda), book (Miranda, who else?), orchestrations (Alex Lacamoire), leading actress (Phillipa Soo), featured actress (Renée Elise Goldsberry), sets (David Korins), costumes (Paul Tazewell) and lighting (Howell Binkley). It is hard to see how a show could receive more nominations than Hamilton has, short of the Tonys bringing back the best sound design award.

Preparing to lick their wounds and lose the top Tony to Hamilton are: Bright Star (5 nominations), School of Rock (4), Shuffle Along (8) and Waitress (4). Four new shows that are still running failed to make the cut for Best Musical: American Psycho (2 nominations), Disaster! (1), On Your Feet! (1) and Tuck Everlasting (1).Disaster!, hoping for a better showing, is likely to fold first, possibly followed by Tuck. American Psycho will run as long as there are theatergoers willing to pay large amounts to view good looking performers in their underwear.

Going head-to-head for the Best Play production award are Eclipsed, a heavy-handed account of the brutality inflicted on Liberian women during civil war, and The Humans, a love-it-or-hate-it tale of a long-suffering dysfunctional family coming together at Thanksgiving. Each goes into the Tony race with six nominations. Also in the field are King Charles III, a look at the future reign of the current Prince Charles of England (5 nominations) and The Father (2), about a family struggling with the patriarch’s dementia. Look for The Humans to eke out a win, but the play is too bleak to appeal to general audiences.

Audra McDonald, the poster girl for the Tonys, already has a record six awards, but she failed to cop a nomination this season, despite favorable reviews for her performance in Shuffle Along. Most of the motion picture stars who trod the boards – Lupita Nyong’o (Eclipsed), Michelle Williams and Jeff Daniels (inBlackbird), Jessica Lange Gabriel Byrne and Michael Shannon (Long Day’s Journey into Night) and Frank Langella (The Father) – gained nominations, except for Jennifer Hudson in The Color Purple.

The 70th annual Tony Awards will be broadcast live from the Beacon Theater on CBS, in a June 12 ceremony emceed by The Late Late Show host (and Tony winner) James Corden.

Below is a complete list of this season’s nominees:

Best Revival of a Play

Arthur Miller’s A View from the Bridge

Best Revival of a Musical

Fiddler on the Roof

Best Book of a Musical

Shuffle Along, Or the Making of the Musical Sensation of 1921 and All That Followed

Best Performance by an Actor in a Leading Role, Play

Mark Strong, Arthur Miller’s A View from the Bridge

Best Performance by an Actress in a Leading Role, Play

Best Performance by an Actor in a Leading Role, Musical

Danny Burstein, Fiddler on the Roof

Zachary Levi, She Loves Me

Best Performance by an Actress in a Leading Role, Musical

Laura Benanti, She Loves Me

Best Performance by an Actor in a Featured Role, Play

Best Performance by an Actress in a Featured Role, Play

Best Performance by an Actor in a Featured Role, Musical

Best Performance by an Actress in a Featured Role, Musical

Jane Krakowski, She Loves Me

David Rockwell, She Loves Me

Jeff Mahshie, She Loves Me

Ivo Van Hove, Arthur Miller’s A View from the Bridge

Scott Ellis, She Loves Me

Hofesh Shechter, Fiddler on the Roof

Sergio Trujillo, On Your Feet!

Larry Hochman, She Loves Me

Film: Playwright August Wilson began his chronicle of the African-American experience throughout the … END_OF_DOCUMENT_TOKEN_TO_BE_REPLACED

Film: Just in time with the opening of movie theaters in Palm Beach County comes the season’s most … END_OF_DOCUMENT_TOKEN_TO_BE_REPLACED

Music: The very last concert Franz Joseph Haydn attended in his life was in March 1808, about a year … END_OF_DOCUMENT_TOKEN_TO_BE_REPLACED