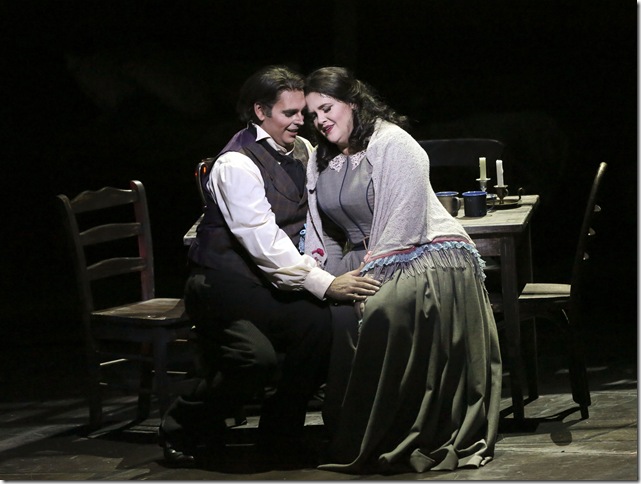 Because of its uninterrupted 119-year streak of popularity, Giacomo Puccini’s La Bohème can come dangerously close to paint-by-numbers opera: Fill in the blanks with some colorful voices, and the work performs itself.

Happily for local audiences, the creative staff of Palm Beach Opera’s just-passed revival of the opera were interested in approaching it with fresh eyes, and the result was a very satisfying, compelling Bohème that engaged its Kravis Center audience on every important level.

On Sunday afternoon, the primary cast of this production gave its second and last performance to a very large, warmly appreciative house. Stage director Fenlon Lamb, a veteran director making her Bohème debut, crafted a show that was straightforward, easy to follow, and full of little touches that added subtlety and veracity to the proceedings.

The Lake Park-reared soprano Keri Alkema, who appeared in last season’s Contes d’Hoffmann and has been making inroads into the dramatic Verdi repertory, was Mimì (the production had been announced with Slovenian soprano Sabina Cvilak, but she was due to give birth this month and bowed out). You could hear Alkema holding back during her first moments on stage until she reached the “Il primo bacio dell’Aprile” section of “Mi chiamano Mimì,” and unleashed her big, dramatic coloratura voice.

If her voice is outside the tradition of the smaller-voiced singers who have taken on this role, her work was no less enjoyable for that, and indeed it was a pleasure to hear the part sung this robustly, particularly in the “Addio, senza rancor” of Act III. Her acting was somewhat reserved in a role that’s pure melodrama, but there was enough good singing there to let us forget about character illumination.

Tenor Dimitri Pittas was an uneven Roldofo, with a fine, strong voice of very attractive color present early on, but falling short in the high C of “Che gelida manina,” forcing him to back off as soon as he struck it. But after taking the (as-written) E under Alkema’s C at the end of “O soave fanciulla” — which was cut off abruptly — his voice recovered for the other three acts without the difficulties he was having at the end of Act I.

He made a good, believable Rodolfo on stage, with a touch of lost-boyness that made the eventual loss of Mimì more poignant. He’s scheduled to sing this role several other times this year, and I’m sure it will be a signature for him; one hopes he can keep his throat from seizing up in his big Act I moment.

The Mexican baritone Luis Ledesma was an excellent Marcello in a role he has sung many times, and that was evident. He moved around the stage with confidence, and his frustration with Musetta was entirely credible. He has a strong, relatively large voice with an easy top, and it blended beautifully with whomever he was singing, perhaps most memorably with Pittas in the “O, Mimì tu piu no torni” duet of Act IV. 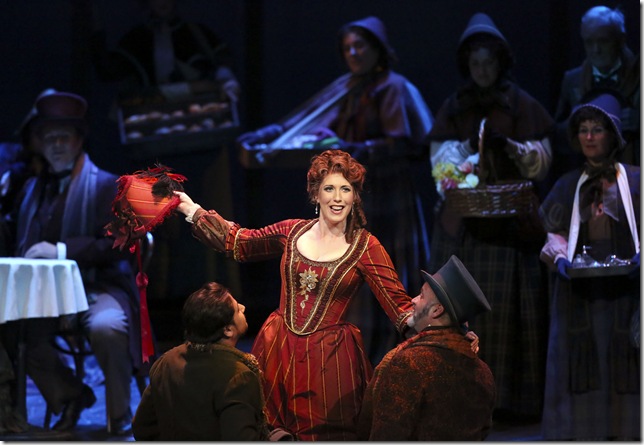 The most engaging performance Sunday afternoon came from Ellie Dehn as Musetta. The young Minnesotan makes an ideal Musetta; her voice is large, richly colored and free of strain, and she sang her “Quando m’en vo’” with just the right sense of snap and sass, handling its arpeggiated flourishes with absolute confidence as she brought the character instantly to life.

She is physically ideal for the role as well: Tall and beautiful, she also is a gifted actress who never overdid things but was able to present a character confident enough to know her appeal and to be able figure out what to do in a difficult situation. The audience adored her, with a noticeably enthusiastic response when she came on for her curtain call at the end.

Evan Boyer was a fine Colline, with a dark voice that penetrated well and had the right kind of elegiac quality for his Act IV “Vecchia zimarra.” Tobias Greenhalgh, a former company Young Artist, was a commendable Schaunard, though his lighter baritone had less presence than Boyer’s.

As the comic relief figures of Benoit and Alcindoro, the veteran Thomas Hammons was splendid, with the kind of commitment that you need to be a good character performer. He sang well, and he made the most of his appearances with a wide range of facial expressions and persuasive body language.

The company’s chorus was quite good in its Act II moment in the spotlight, with the women in particular carrying off their assignment with verve. An especially pleasant surprise was the very fine work of the Young Singers of the Palm Beaches, who were well-drilled and vigorous as the endearing brats of the Latin Quarter. And Nicholas Nestorak, a current Young Artist, made a good Parpignol.

Guest conductor Daniele Callegari led a terrific Palm Beach Opera Orchestra, and he led the music with a gratifyingly expert attention to dynamic detail. He kept the pace lively and the orchestra supportive, but he knew exactly when to unleash the power of his instrumentalists, an approach that did precisely what it was supposed to do: Bring out the high points of the action. Under his hands, this 1896 score sounded fresh, full of light, and miraculously supple. 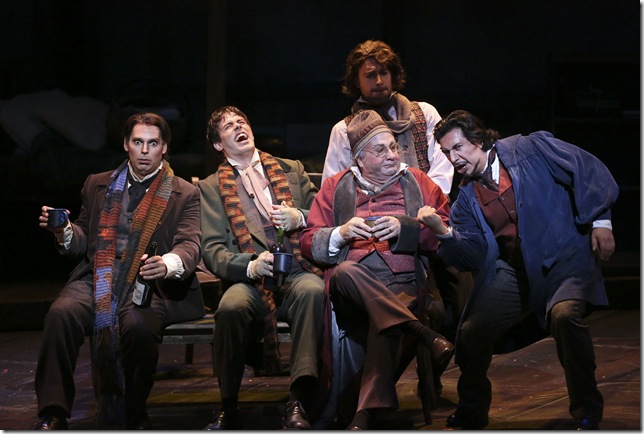 Indeed, this whole production had a great unity to it that made it exceptionally appealing. Besides strong casting and a good production borrowed from Arizona Opera, director Lamb’s attention to detail brought the story home; a telling example came at the beginning of Act II, when, as Mimi and Rodolfo swooned over each other, Colline and Marcello, who were sitting to the left of them, both shifted in their chairs and moved discreetly over a space or two, in that familiar “get a room” gesture of embarrassment and respect that we all grant to the newly infatuated.

It was that sort of thing that made this Bohème work so well; its high level of singing and orchestral playing faithfully demonstrated why this score is so beloved, and its satisfyingly realistic staging gave its viewers something to cherish as well as admire.

Film: Just in time with the opening of movie theaters in Palm Beach County comes the season’s most … END_OF_DOCUMENT_TOKEN_TO_BE_REPLACED

Music: The very last concert Franz Joseph Haydn attended in his life was in March 1808, about a year … END_OF_DOCUMENT_TOKEN_TO_BE_REPLACED