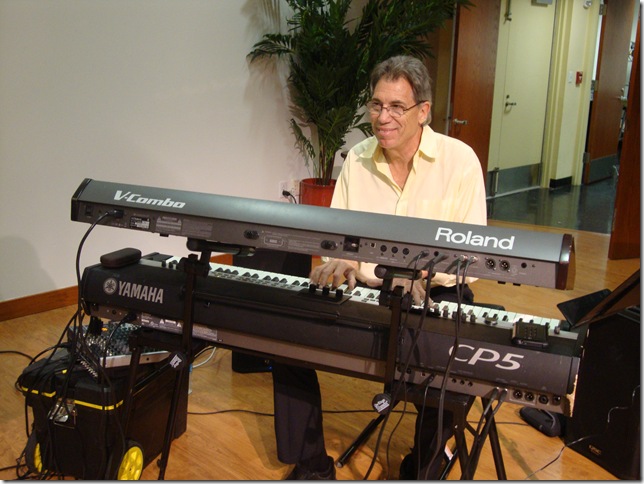 There may not be a better Palm Beach County-based jazz instrumentalist than pianist Delray Beach resident Brad Keller, but he certainly played the field musically beforehand.

“I started as a vocal major in college,” he says. “I was going to be an opera singer until we all found out I wasn’t good enough. So I studied piano at Broward Community College and Florida State University, which served to teach me that I actually despised music education. When I was 28, my friend Bonnie Rossa and I decided to go get jazz degrees at Florida Atlantic University, but I didn’t feel I was good enough to play jazz. So I played pop music, then became a singing jazz pianist about 10 years later before deciding I was more comfortable playing without singing.”

Piano is a tradition within the Long Island native’s family. Father Jack Keller (1921-2003) was a renowned pianist, trombonist, arranger, and commercial jingles composer. Uncle Allen Keller, who died only last month at age 90, played piano in the house band at the Carlyle Hotel in New York City during the 1940s, allowing him to perform with guests like Duke Ellington, Ella Fitzgerald and Billie Holiday.

Ironically, considering his reluctance toward music ed, Keller also got a teaching certificate at FAU. He’s made good use of it since, imparting lessons taught to him by family members, among others.

“I’ve been teaching for 27 years,” Keller says, “I’ve been an adjunct jazz piano instructor for 10 years at Palm Beach State College, and I’ve taught students in all grades, full-time, for four years at Eldridge Gale Elementary in Wellington.”

If you haven’t seen Jonathan Joseph (www.jonathanjosephdrums.com) play, your first experience may have you thinking you’ve seen one of the world’s greatest jazz/fusion drummers — even if you’d never heard of him before. The Miami native is currently touring and recording with guitar icon Jeff Beck, and has also performed with Joe Zawinul, Pat Metheny, Yellowjackets, David Sanborn, and Joss Stone. A two-time Grammy winner with a new instructional book, Exercises in African-American Funk, Joseph’s self-titled quartet with saxophonist Felipe Lamoglia, keyboardist Martin Bejerano and bassist Armando Bola plays at 8 p.m. Feb. 16 at the Funky Biscuit, 303 S.E. Mizner Blvd., Boca Raton ($7-$15, 561-395-2929).

Film: Just in time with the opening of movie theaters in Palm Beach County comes the season’s most … END_OF_DOCUMENT_TOKEN_TO_BE_REPLACED

Music: The very last concert Franz Joseph Haydn attended in his life was in March 1808, about a year … END_OF_DOCUMENT_TOKEN_TO_BE_REPLACED