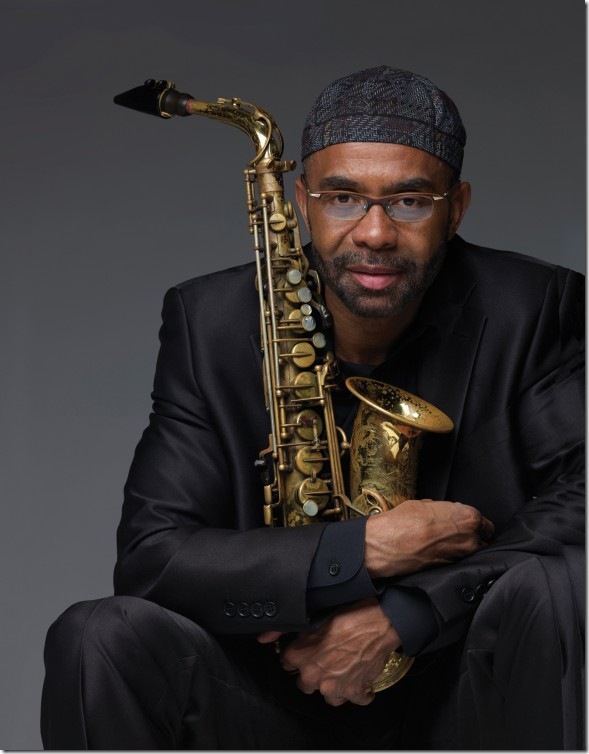 If 53-year-old Kenny Garrett wasn’t already well-known as one of the leading alto saxophonists of his generation, evidence might otherwise suggest he was a jazz pianist.

“My main inspirations are Art Tatum and McCoy Tyner,” he says of the blind virtuoso pianist Tatum (1909-1956), who dominated jazz in the first half of the 20th century, and the 75-year-old Tyner, who rose to stardom in the ’60s as the pianist in saxophonist John Coltrane’s quartet. “Listening to those guys is hearing two different worlds of greatness, along with people like Chick Corea, Keith Jarrett and Herbie Hancock.”

A listen to Garrett’s latest CD, the 2013 release Pushing the World Away (Mack Avenue), pushes the notion one step further. The disc not only features tributes to pianists Corea (the Latin-meets-Middle Eastern “Hey Chick”), Chucho Valdes (the Afro-Cuban “Chucho’s Mambo”) and Donald Brown (a stately “Brother Brown”), but it’s Garrett’s own piano playing that anchors the latter — an evocative ballad accentuated by a three-piece string section.

“Donald is a very underrated musician,” Garrett says of his friend, who co-produced the CD. “We went back and forth over whether I was going to play the piano part or he was, and he finally talked me into it. And when I hear how it turned out, let’s just say that I don’t feel like I have to run and hide.”

The well-paced Pushing the World Away opens with another pianistic tribute, to Garrett’s late friend Mulgrew Miller (the frenetic “A Side Order of Hiijiki:), and closes with another burner, “Rotation” (with simultaneous lines by pianists Vernell Brown and Benito Gonzalez).

All feature Garrett’s assertive yet inviting alto tone, along with his unique compositions and arrangements. There’s even an instrumental cover of the Burt Bacharach tune “I Say a Little Prayer,” a pop hit for vocalists Dionne Warwick and Aretha Franklin that became part of Garrett’s song list accidentally.

“I just started playing the intro one day,” he says, “the other guys came in, and it sounded like an arrangement. And people reacted to it when we would play it as a sound check at a venue, singing and clapping along, so I included it.” 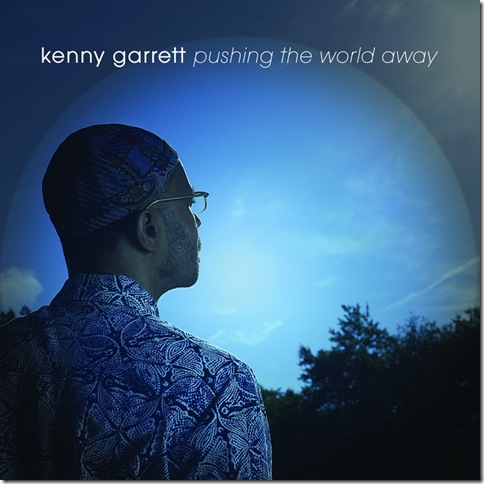 The disc’s title refers to what Garrett had to do in order to actually complete the follow-up to his heralded 2012 CD, Seeds From the Underground.

“There was a lot going on,” he says, “between ‘Seeds’ and the resulting traveling, but I decided to push through and make this record, anyway. It required a great deal of focus to do it with so many distractions.”

“Rudy and I go back a ways,” Garrett says. “He doesn’t only play jazz, but also pop and Latin music, so he always brings some interesting colors and sounds. And working with Miles was great. I’d heard some stories about how he could be before I worked with him, but he was actually pretty mellow then, telling me great stories and showing me a lot of love and respect on the bandstand.”

The New Jersey-based Garrett was born in Detroit in 1960, and rose through the ranks of the city’s then-thriving jazz scene during the ’70s. After graduating high school, he eschewed studying music in college, choosing instead to earn while he learned as a teenager and tour with the Duke Ellington Orchestra, led by the bandleader’s son Mercer Ellington.

Garrett started his solo recording career in 1984, and toured and recorded with other icons like trumpeters Woody Shaw and Freddie Hubbard and drummer Art Blakey before crossing paths with Davis in the mid-’80s.

“That was great,” Garrett says. “I’d met John a few times before, but got the opportunity to learn things from him, both onstage and in conversation. The other guys were inspirational as well, and Chick is a great friend. The song title ‘Hey Chick’ stems from what I’ll say to him when I call him on the phone to play piano ideas to him. And he calls me up, says, ‘Hey, Kenny,’ and does the same thing all the time. We leave each other voicemails like that. Sometimes we don’t say anything, we just start playing. He’ll know it’s me, and I’ll definitely know it’s him!

“Chick sometimes wouldn’t show up for sound checks, because practically everyone in that band played piano, and I’d end up doing his sound checks. I started out composing on my horn, but gradually became a composer on piano.”

The altoist’s bandmates are even trying to talk Garrett into playing piano as a second instrument in concert.

“Those guys are messing with me, telling me I have to,” he says. “Even Chick will say, ‘You have to play piano on at least one song live.’ Maybe someday.”

While Garrett says that Davis, like most musical artists, had his live sets planned for every concert, he takes a decidedly different approach with his quintet. So don’t plan on being able to predict this or any show’s material or song order.

“I sometimes come in with the first tune in mind,” Garrett says, “but otherwise it could be songs from ‘Pushing the World Away’ and ‘Seeds,’ and maybe several other albums if I feel we can stretch out enough. Corcoran recently told me something I hadn’t realized as I was calling out tunes. He said, ‘We just did a set, and played songs from six or seven different CDs!’”

Film: Playwright August Wilson began his chronicle of the African-American experience throughout the … END_OF_DOCUMENT_TOKEN_TO_BE_REPLACED

Film: Just in time with the opening of movie theaters in Palm Beach County comes the season’s most … END_OF_DOCUMENT_TOKEN_TO_BE_REPLACED

Music: The very last concert Franz Joseph Haydn attended in his life was in March 1808, about a year … END_OF_DOCUMENT_TOKEN_TO_BE_REPLACED