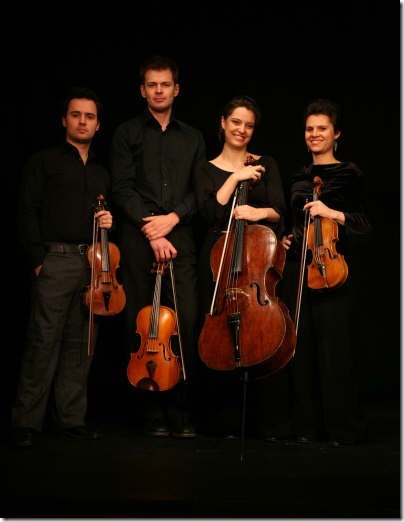 Sometimes the difference between a splendid performance of something and one that’s merely good comes down to an exercise of fundamentals.

In the case of Britain’s Elias String Quartet, which played the Society of the Four Arts on Sunday afternoon, its exceptional performances had a lot to do with dynamic range. Seldom have I heard a performance with the kind of soft dynamics the Elias brought to its readings of two canonical quartets, and the effect was akin to that of a long-overdue cleaning of a centuries-old painting.

The Elias — violinists Sara Bitlloch and Donald Grant, violist Martin Saving, and cellist Marie Bitlloch —opened with one of the six Op. 18 quartets of Beethoven, No. 4 in C minor, one of the composer’s favorite and most important keys. From the very first bars, one could hear the seriousness and thought that had gone into its preparation (the group is currently in the middle of its Beethoven Project, which involves learning and performing all 16 of Beethoven’s quartets).

The driving opening theme opened with hushed urgency and strong accents on the first two melodic cadences, which set the framework for the four-movement drama to follow. One other critical element was clear from the beginning as well: This was a foursome whose members were fully in sync with one another.

This was a taut, intense first movement that at the same time was light on its feet, like an athlete in top condition. First violinist Sara Bitlloch’s playing soared into the upper registers with ease and confidence, and her cellist sister Marie played her top of the A-string solo statement of the secondary theme with the same kind of beauty and assurance.

The Haydnesque ticking-clock second movement relies on its loud-soft contrasts to make its best effect, and the Elias did it beautifully, making the soft passages super-soft so that the group would have somewhere to go, and scrupulously following the composer’s articulations and dynamic markings. The Menuetto, like the first movement, was full of tension and power, with a seemingly placid but actually quite nervous Trio, seamlessly performed.

The finale, taken at quite a fast clip, also benefited from wide dynamic contrasts, carefully observed, and a sense of narrative arc. The Elias clearly knew where they wanted to go right from the first bars, and structured their performance with all the drama they could muster. The coda was a whirlwind, and the ending joyful and abundant with Beethoven’s rough wit. It was a splendid rendition of this great quartet, so much so that now I’ll be searching out the rest of Elias’s Beethoven cycle.

After the Beethoven came the Quartet No. 3 (Reed Stanzas) of the contemporary British composer Sally Beamish (b. 1956). Composed for the Elias and premiered by them in the Proms chamber series at London’s Cadogan Hall in the summer of 2011, Beamish’s piece, as second violinist Donald Grant explained in brief remarks, was composed on an island in the Outer Hebrides and plays to Grant’s other musical life as a Scottish folk fiddler as well as evokes the bird calls and atmosphere of Beamish’s native East Anglia.

But where another British composer resident in Scotland, Peter Maxwell Davies, brought dense, complicated scores down to London from his home in the Orkneys, Beamish’s quartet is more reminiscent of the music of Finland’s Einojuhani Rautavaara in its spare bleakness and melancholy, lonely beauty. Grant opened the one-movement, multi-section quartet by walking in from the wings playing a Scottish folk-style theme, which he then intoned over a bed of static, clustered chords in the three other strings.

You could tell that Grant is a fine traditional-music player; the darkly colored theme he played was full of color and majesty despite its essential simplicity. Bird-call effects soon followed as the texture slowly broadened, each of the instruments taking some variant of the theme, all of it eventually leading to a speedy middle section of martial motifs and violent energy that was highly evocative of Shostakovich.

The slow, somber pace of the opening bars returned, then the theme in its more-or-less original guise, ending with a face to silence. Beamish’s quartet is a well-constructed piece that conjures a mood of isolation and timelessness quite effectively. The Elias gave it a compelling reading, and while it is a relatively slight work, it certainly bears repeated listening.

The concert’s second half was devoted to the String Quartet of Claude Debussy, his lone mature exercise in this form, and written early in his compositional career. In it, one can clearly hear the influence the work had on Maurice Ravel’s lone String Quartet a decade later, and if Debussy’s work is not as forward-looking as Ravel’s, it nevertheless remains a beautiful piece of late Romantic music that always raises a feeling of regret that Debussy did not compose more music in this format, and more chamber music in general.

Dynamic variety was again a hallmark of the Elias Quartet’s performance. Louds and softs were juxtaposed for maximum musical effect, especially in the pizzicato tradeoffs in the second movement and the luxuriously intimate way in which they group handled the main theme of the third movement.

Although Debussy’s idiom close to 100 years after Beethoven’s was quite different, the Elias’s precise, spotless playing brought the same kind of freshness and animation to the Debussy as it did the earlier work. This was a delicious Debussy, wonderfully played and realized with exactitude, which judging from this performance is standard procedure for this excellent foursome.

Music: The very last concert Franz Joseph Haydn attended in his life was in March 1808, about a year … END_OF_DOCUMENT_TOKEN_TO_BE_REPLACED

Film: Major League Baseball culminates each season with the World Series, but to find the true … END_OF_DOCUMENT_TOKEN_TO_BE_REPLACED