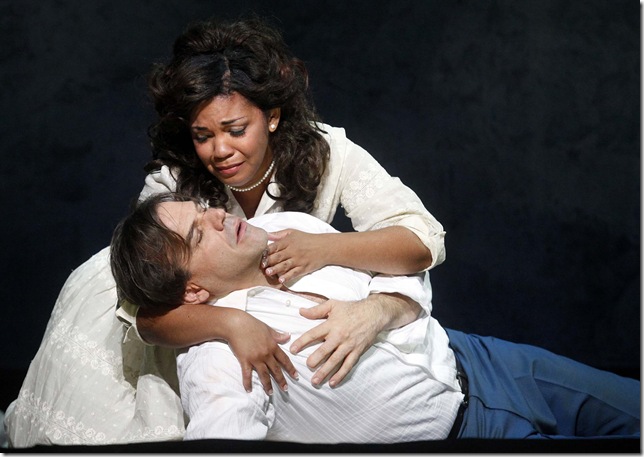 Gounod’s Romeo et Juliette, which I heard Saturday at Palm Beach Opera, had a last-minute replacement tenor, Richard Troxell, filling in for the indisposed Bruno Ribeiro.

The high tessitura of Romeo’s part proved difficult for Troxell on occasion, especially in the first two acts. However, he rallied and won the hearts and minds of the audience with a courageous second-half performance.

Soprano Janai Brugger-Orman was his delightful Juliette. Her first aria, the popular Je veux vivre, about not being interested in marriage, was beautifully paced and well-sung. Of course, she has a sudden change of mind when Romeo turns up.

The set is an enormous two-story scaffolding, with a 30-foot-wide one-story wall, which, with the placement of flowers, chairs, tables and beds served adequately as a garden, a room and the honeymoon suite.

Costumes were updated from the late 1940s Italy of director Kevin Newbury’s setting to dirndl skirts of the 1960s for the women, Yves St. Laurent suits for the men. The costumes would have worked just as well with a street scene of Verona, more suitable to the setting of this intimate tale of star-crossed lovers from rival families.

On Saturday night, Act I dragged on and on. The chemistry between the lovers seemed nonexistent. I wanted to blame the last-minute substitution, the poor libretto, even the continuous crowd scenes, some of which seemed superfluous. By the end of Act II, I thought the company would have done better had they staged West Side Story. I concluded it was the cavernous effect of the enormous set that challenged singers, orchestra and conductor Will Crutchfield. It overwhelmed the singers, as nothing existed off which their voices could be bounced.

David Adam Moore’s Mercutio brought lots of energy to his role and things improved when he began to sing Mab, la reine des mensonges, making light of his friend Romeo’s dark premonitions. It’s a great baritone aria and he sang it magnificently. Shirin

Eskandani’s Gertrude was a steadying influence with her warm mezzo timbre.

Evanivaldo Correa Serrano was good as the raging Tybalt. His high tenor sound is a bit “pinched” and needs to be opened up. Jesse Enderle’s Paris was perfect as the sophomoric youth. Grigory Soloviov as Juliet’s father, Count Capulet, singing from the top of the scaffolding, opened a fine vocal performance that improved all night.

Kenneth Stavert’s Gregorio was very good. He moved well and sang well, and gave a friendly and convincing performance. Benjamin Clements’ Duke fitted the role nicely in an all-white suit with a dashing Panama hat; I’d wish for more heft  in his bass voice.

Jennifer Rivera’s pants role as Stephano was a standout. Her energy as the young, cheeky chappie had everyone amused and her lovely mezzo was sweet to hear. 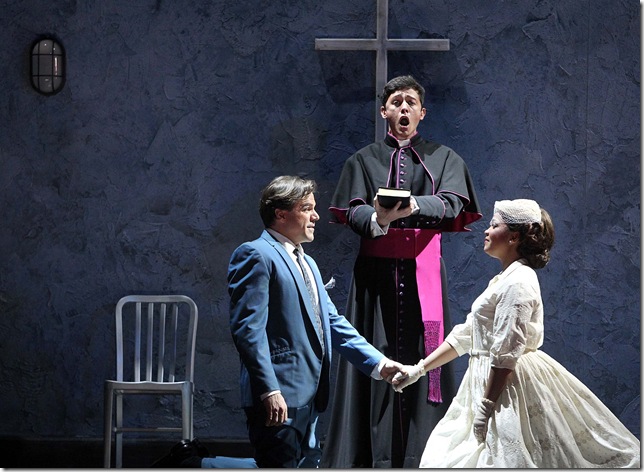 The sensation of the night was Alexander Vinogradov as Frere Laurent. From the moment he began to sing we knew we were in the presence of a wonderful talent. His deep, deep bass is right out of the Russian Orthodox Church’s liturgical tradition. The trio marriage scene of the happy couple and the friar was done with great taste and consummate artistry.

The last-act bedroom scene duet was well done, too. By this time, Romeo and Juliette were in sync. It was their best duet of the four they sing together, the most pairing in any opera of leading roles. The silhouetted outlines of the attendees at Juliette’s funeral were a coup for lighting designer D.M. Wood.

But the tomb scene had a cot on which Juliette lay faking death: A hospital gurney would have been a better prop. Romeo’s death gave Troxell a chance to shine with some lovely sotto voce singing, which he did gracefully. Emotions were running high by now, and the audience rose to applaud a brave performance, hardly noticing what had been billed as three hours of opera was in fact three-and-a-half hours long (the stars were not aligned).

Afterthought: This is a French opera, and Palm Beach Opera is an international company. The French tenor sound is a nasal spinto, quite highly placed in its register, ideal for this opera. So why turn to Latin and Italian countries for singers when France has so many good French tenors, whom Gounod obviously had in mind when he wrote this work?

Film: Playwright August Wilson began his chronicle of the African-American experience throughout the … END_OF_DOCUMENT_TOKEN_TO_BE_REPLACED

Film: Just in time with the opening of movie theaters in Palm Beach County comes the season’s most … END_OF_DOCUMENT_TOKEN_TO_BE_REPLACED

Music: The very last concert Franz Joseph Haydn attended in his life was in March 1808, about a year … END_OF_DOCUMENT_TOKEN_TO_BE_REPLACED