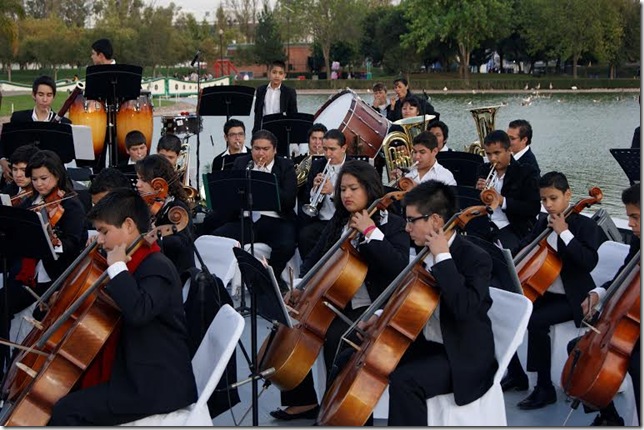 A youth orchestra concert with roots in a rural Mexican library comes to Delray Beach’s Crest Theatre on Sept. 19.

They will perform music by Mexican composers Arturo Márquez and José Pablo Moncayo (his well-known Huapango), Argentina’s Alberto Ginastera, and French Romantic composer Camille Saint-Saëns (the “Bacchanale” from Samson and the Danse Macabre). And it’s hard to give a concert like this without a flag-waving American favorite such as John Philip Sousa’s Barras y Estrellas por Siempre — perhaps better known as The Stars and Stripes Forever.

Camarena, who was trained as a computer scientist in the early 1980s, got the idea for the library in her hometown after living in San Jose, Calif., with her husband, who worked for Apple Inc., and their four sons. Her family benefited in San Jose from a strong library system, she said, and that made her think about the situation back home in the impoverished areas of León.

“I said to myself, ‘If we go back to León, I need to start a library for children,’” she said, speaking recently at a Starbucks café in Boca. She got that chance when Apple sent her husband Hermán back to Mexico for two years, but Camarena found little support for her idea at that time.

“Nobody believed in it. What were they saying? ‘There’s hunger, there’s thirst, there’s all these things that really need to be fixed before we have a library.’ So it was very hard at the beginning,” she said. “But I knew it was the right thing to do, and it really needed to be done.”

Starting out of a friend’s house, and then moving to spaces in a mall and a university, the children’s library picked up fans steadily before Camarena’s foundation was able to get funding to construct a building for the library. It began to offer arts programs such as piano, guitar and dance lessons, and after Camarena and her family returned to the United States, her mother, who had taken over operation of the library, talked to her El Sistema, the pioneering music education program in Venezuela.

Convinced that El Sistema would be ideal for the library operation, Camarena’s mother talked to Mexico’s National Council for Culture and Arts, which donated musical instruments. All that remained was to encourage children to join, but Camarena’s mother was worried interest would be minimal on the eve of the first informational recruitment session.

She needn’t have worried.

“That day, when they opened the doors, there were 200 kids who wanted to join the orchestra,” Camarena said. The Imagina Foundation also added a choir, and over the past six years the young musicians have performed more than 100 concerts.

The Harmony Without Borders project came out of visits by eight Imagina musicians to Pequeñas Huellas in Italy and a teaching sojourn in Mexico by Susan Siman, a Miami-based Venezuelan who has been a teacher with El Sistema for decades, and whose Siman Orchestral Foundation replicates that effort.

Putting together a concert of musicians from three countries for the first time has been a challenge for Imagina, Camarena said, but support has been strong, with donations of airline flights and contributions from South Florida merchants such as Papa’s Tapas and Anthony’s Coal-Fired Pizza, which are providing free meals, she said.

If you go: The Harmony Without Borders orchestra will give a free open rehearsal at 2 p.m. at the Crest Theatre, with the formal concert beginning at 7 p.m. Tickets for the night concert are $25, $48 and $65 (VIP). Visit delrayarts.org or call 243-7922, ext. 1. To learn more about Imagina, visit www.imaginachildrenfoundation.org.

Film: Playwright August Wilson began his chronicle of the African-American experience throughout the … END_OF_DOCUMENT_TOKEN_TO_BE_REPLACED

Film: Just in time with the opening of movie theaters in Palm Beach County comes the season’s most … END_OF_DOCUMENT_TOKEN_TO_BE_REPLACED

Music: The very last concert Franz Joseph Haydn attended in his life was in March 1808, about a year … END_OF_DOCUMENT_TOKEN_TO_BE_REPLACED