Vocalist, actress and now author Toni Tennille knows a lot about love, such things as muskrat love and love that will keep us together, about touching your lover the way you want them to touch you and about doing loving things to paramours one more time.

Alabama-born Cathryn Antoinette Tennille and husband, Daryl Dragon, the captain’s hat-wearing, usually somber-faced, taciturn keyboard master, burst onto the pop music scene in the mid-1970s. They parlayed an image of everlasting love and romantic togetherness through hit songs like the Neil Sedaka-Howard Greenfield song, “Love Will Keep Us Together,” and Tennille’s own, “Do That to Me One More Time.”

They also shared a TV variety series that showed Tennille smiling and singing across her own keyboard toward Daryl, engrossed in playing a raft of electronic instruments, pretty much all at the same time.

“A lot of people thought Daryl was creating a character, but that was really the way he was,” said Tennille, who has changed her marital status back to single and moved from Prescott, Ariz., to Lake Mary, Fla. In 2014, after 39 years of marriage to a man her PR agent called “an emotionally inaccessible husband,” Tennille severed that connection.

“It was a case of ‘We can’t live with each other, can’t live without each other,’” said the woman noted for her engaging smile, rich contralto voice, classical piano training and an abiding love of dogs. The first Captain and Tennille album cover showed them with their bulldogs. Tennille now has a couple of Australian shepherds, Bebop and Lula, at her home just north of Orlando.

“I had to finally leave Daryl,” she said. “He is an extremely complicated man. I think of him as a tortured genius, in a way. He kind of does it to himself. He is concerned about food and health and he worries all the time, he always did.”

An evening at the Tennille-Dragon household might find her making dinner; something specifically for Daryl and regular food for others. She said Daryl might eat dinner in his own chair away from the table. But if he did join the guests, he probably would disappear later in the evening. 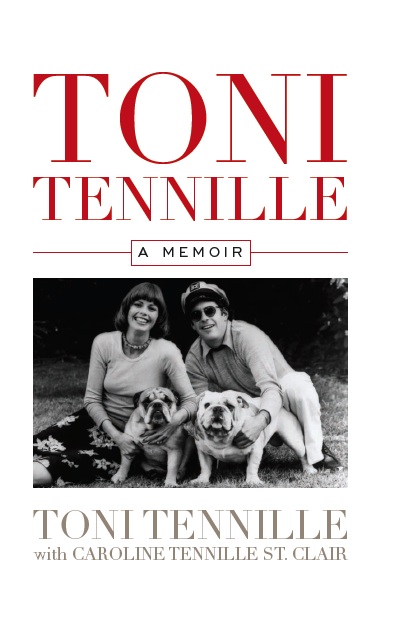 Toni Tennille hasn’t yet put the bizarre marriage into the past – and may never do so. She has penned a recollection of her years with Dragon in Toni Tennille: A Memoir. She will be signing the volume she wrote with her niece and housemate, Caroline Tennille St. Clair, at 2 p.m. Saturday, Aug. 13, at the Barnes & Noble Store at Legacy Place in Palm Beach Gardens.

Not only did the Tennille ladies write a book, Tennille also created an audio version that has been accepted for Grammy consideration in the Spoken Word category. Coincidentally, she and Dragon won a Grammy in the Song of the Year category for “Love Will Keep Us Together,” yet the statuette was lost and neither she nor the Captain knows where it is.

The visit won’t be Toni Tennille’s first to Palm Beach County. The 5-foot-11 performer – one of “four fabulous Tennille sisters,” she said — starred in a production of Victor, Victoria in Palm Beach in 1999.

Tennille stresses that she hasn’t abandoned her husband of nearly four decades. “He is still in Arizona. We are still friends. We still talk; I called him this morning. I care about him and he knows it. He cares about me in his odd kind of way.”

Daryl Dragon, whom Tennille calls a pioneer of electronic music, is the son of Carmen Dragon, a Hollywood composer. In his younger days, Daryl performed at clubs in the Malibu area with a couple of his brothers. But he remained in the background — always his preferred spot — while his brother, Doug, normally took care of the front work.

The Captain and Tennille met in California. She had just graduated from college and was acting with the South Coast Repertory Theater. Dragon was touring as a keyboard player for the Beach Boys. The pair ended up living together, a situation her Southern mom didn’t particularly cotton to.

“I’d have married Daryl in a hot minute if he had asked. But he never did. My mother, a lovely Southern woman, was very disturbed that we were living together. She said, ‘When are you are Daryl getting married? He comes from such a fine family.’”

Their record company, A&M, beat them to the altar, issuing a press release that said the Captain and Tennille were married on Valentine’s Day. “Actually, we got married on Veterans Day,” she said, months after A&M jumped the gun. They took their vows at the Silver Queen Saloon in Virginia City, Nev. No photographers were present, so they had their “wedding picture” taken at a tourist location. They were dressed in 19th-century outfits, and Dragon was holding a rifle.

Tennille admits it took “a lot of soul searching” to cut off a partnership that resulted in 10 albums, 14 chart hits, a busy touring schedule, a regular variety show and several TV specials. “A therapist convinced me to leave Daryl. I talked to her for months. She helped me find my way.”

Having turned 76 years old in May, Tennille said she doesn’t regret her years with Dragon. “It’s a wonderful thing to look back over your life and realize what things were important when you were going through them and didn’t understand at the time. Daryl was really instrumental in bringing out all the creativity in me. This was the most creative time in all my life.”

“Most of the songs I wrote were for him,” she said. “When I asked if he listened to the lyrics, he said he just listened to the music. Through him, though, I found one of my musical voices, and for that, I will always be grateful.”

Tennille is sorting through “a lot of things on my plate” before moving on. “I have a lot of options,” she said. “I am just finishing up the book promotion tour. I get a lot of messages on Facebook. I promise to answer them all.”

Film: Just in time with the opening of movie theaters in Palm Beach County comes the season’s most … END_OF_DOCUMENT_TOKEN_TO_BE_REPLACED

Music: The very last concert Franz Joseph Haydn attended in his life was in March 1808, about a year … END_OF_DOCUMENT_TOKEN_TO_BE_REPLACED